Skip to content
Unlock First and Business Class awards at competitive rates with several airlines when you buy Alaska miles at 2.11 US cents each. Ends 1st November. 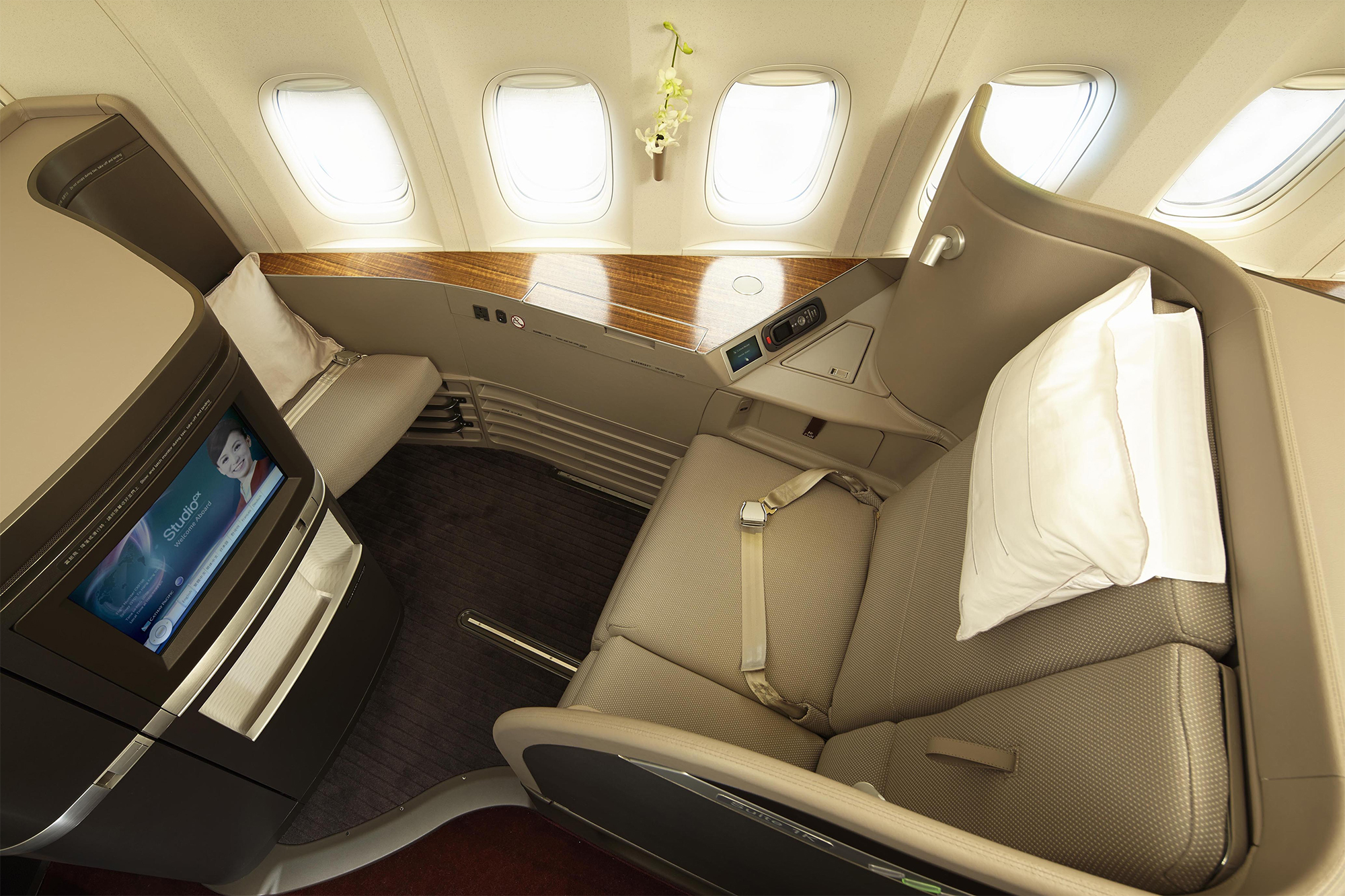 Alaska Airlines Mileage Plan miles is an award currency we talk about a lot, because we like it a lot. Unfortunately they are hard to come by in Singapore, so one of the quickest and easiest ways to accrue them is to take advantage of one of the regular bonus purchase offers.

Good news for October is that a deal is back – with Alaska offering up to a 40% bonus, allowing you to top up your balance with miles at 2.11 US cents each (around 2.92 Singapore cents each).

Having said all that, Alaska miles aren’t for everyone, and 50% bonus deals are occasionally offered, but they are a great frequent flyer currency to hold for these good value premium cabin redemptions in Asia-Pacific and beyond with a number of airlines.

Simply log on to your Mileage Plan account to check how your individual bonus is structured. Alaska often tailors these promotions slightly depending on your customer profile, so not everyone gets exactly the same deal. 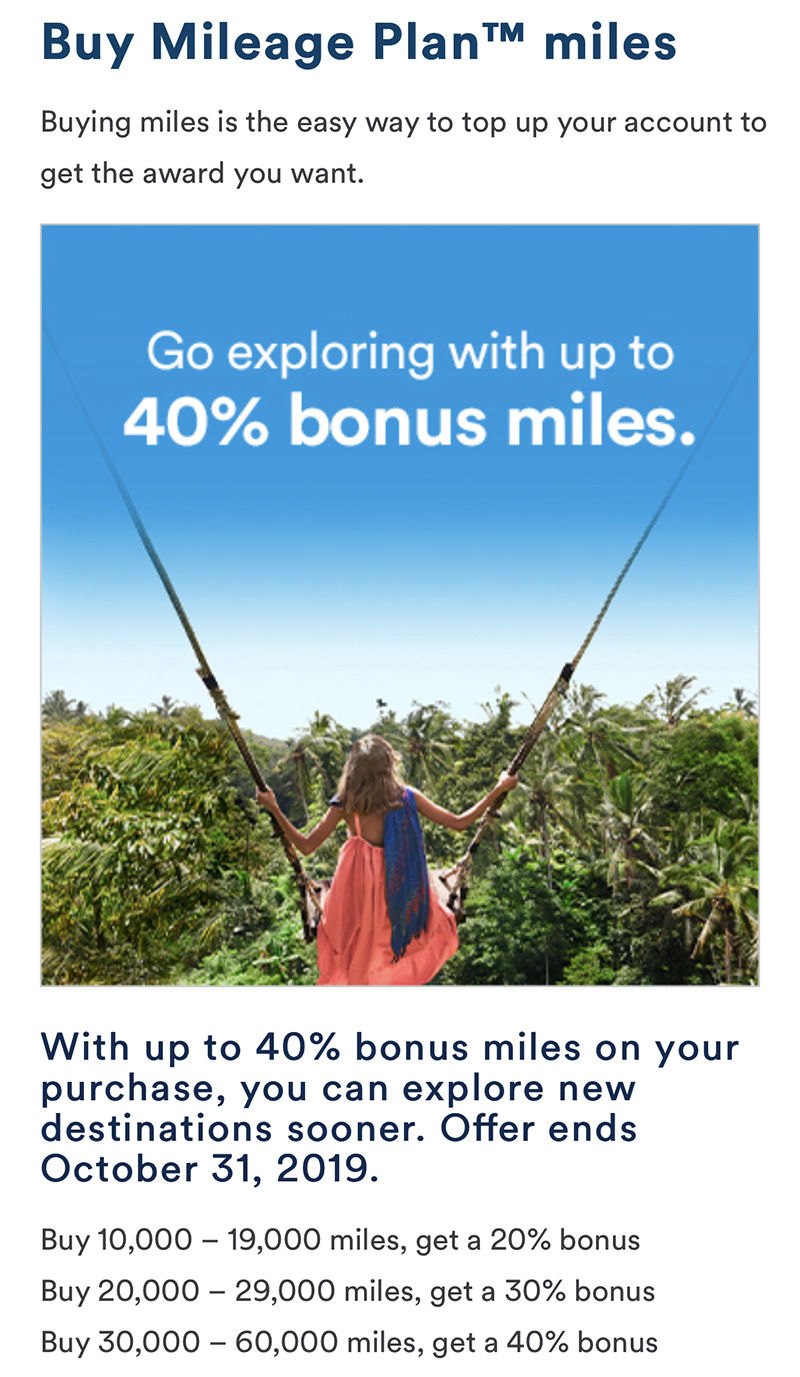 This time round both Eddie and I have been offered the same deal, which is increasingly common and suggests most of you will probably see the same.

Alaska is strict about the offer deadline, so it will completely disappear at the end time – we’ve tested it to the minute in the past. We would therefore recommend making your purchase before approximately 2pm on 1st November in Singapore if you’re interested, just in case you have any issues or the payment doesn’t go through first time.

When used correctly, Alaska miles can represent very good value at these high bonus rates. The current 40% bonus is the second highest the airline tends to offer, with occasional 50% bonus deals making the purchase even sweeter.

If you’re not in a hurry – our advice is wait for a 50% bonus. They used to be rare but now seem to come around at least a couple of times a year.

Don’t worry if you have no plans to fly on Alaska Airlines though, as you probably already know it’s First and Business Class redemptions with Alaska’s partner airlines where the value of this frequent flyer currency lies.

If like us you’re based in Asia, options include Cathay Pacific or JAL Business / First Class to the USA, Qantas from Sydney to Dallas in First Class on the A380, even Qantas flat-bed A330 / 787 domestic Business Class can be a steal with these miles.

The big ‘steal’ though, is the JAL ‘stopover trick’, and here’s how it works…

There are many uses of Alaska Miles for members based in Singapore, but without question one of the best is the JAL stopover ‘trick’.

This is a ‘return’ JAL Business Class flight from Singapore to Japan for 25,000 Alaska Miles plus around US$60 in taxes. The only snag? You’ll need to either depart on your first flight somewhere other than Singapore (e.g. Kuala Lumpur, Jakarta or Bangkok) and then fly back to Singapore at the end, or start in Singapore then end the trip in one of those places.

Here’s how it works in a bit more detail.

On our most recent trip earlier this year we commenced the journey in Bangkok as we wanted to start in Osaka and JAL doesn’t fly there directly from Singapore.

After positioning on a cheap Scoot flight SIN-BKK, then sampling the excellent and relatively new Qatar Airways Bangkok lounge for a few hours, we took the non-stop overnight BKK-KIX flight.

For the return sector we were leaving from Tokyo and flew non-stop from Narita to Singapore. Total cost per person was 25,000 Alaska Miles + US$60, in addition to the Scoot flight. We also had the cost of positioning between Osaka and Tokyo, but you wouldn’t need to do that if (like most people) you just use the trick for a Tokyo trip.

If the JAL stopover ‘trick’ doesn’t interest you, the next best way to use Alaska Miles for Singapore-based flyers is in First or Business Class on Cathay Pacific.

You can fly all the way from Singapore to Los Angeles in Business Class for 50,000 miles or in First Class for 70,000 miles (Singapore Airlines is charging 95,000 and 130,000 KrisFlyer miles respectively for the same trip).

Even though the Alaska award chart shows that redeeming Europe flights on Cathay Pacific is only possible to or from Hong Kong, you can fly Singapore to Europe on Cathay using Alaska Miles, but they will charge you for the Singapore – Hong Kong (Intra-Asia) and Hong Kong – Europe rates combined (22,500 + 42,500), making it a relatively poor deal at 65,000 miles in Business Class.

Both flights are combined into a single itinerary for you so it’s a simple option, but in our opinion it’s better to position to Hong Kong with a low-cost airline then take the competitive Business Class rate with Alaska Miles from there.

Alternatively use Avios and position to Hong Kong on Cathay for 22,000 points in Business (unfortunately this recently increased from 20,000 points), they will also check you through for your onward Europe flight redeemed using Alaska Miles despite separate itineraries, provided you have built in a 1hr+ connection time.

The only downside when using Alaska Miles to book Cathay Pacific flights is that availability is not searchable online. You’ll have to search using another tool (we recommend using the British Airways Avios site), then call Alaska to book.

As we’ve mentioned before, there are varying accounts regarding what Cathay Pacific availability Alaska phone agents can and cannot see. We generally find the Cathay availability shown on the BA Avios site to be accurate. Sometimes it’s more, sometimes it’s less.

You’ll also have to call to book LATAM awards, though their flights between South America and Australia / New Zealand are not redeemable through Alaska miles so the options are not likely to be useful to our Asia-Pacific readers.