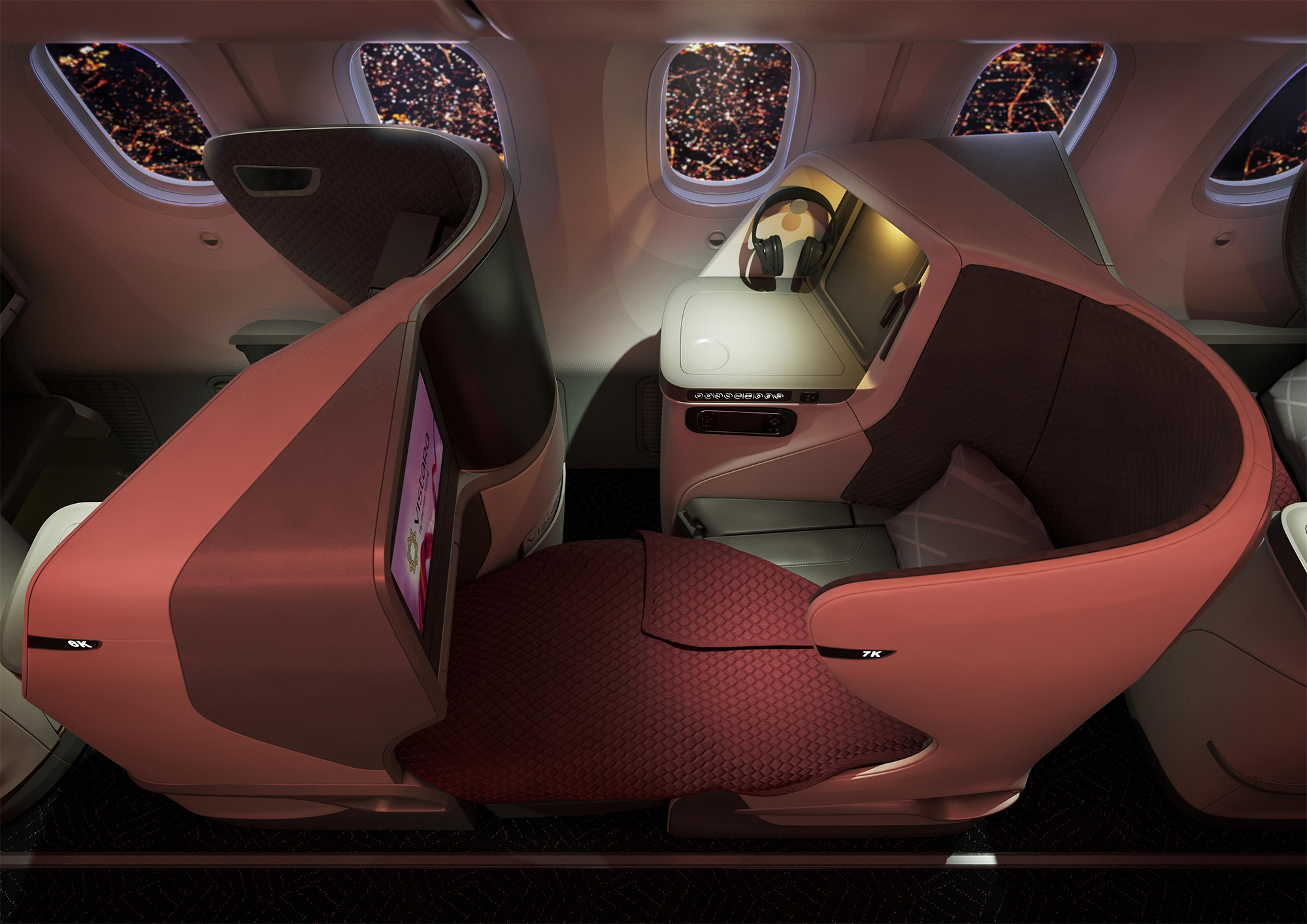 The delivery marks India’s first Boeing 787-9 variant (Air India operates the 787-8, while to date no Indian carrier has opted for the stretched -10 version). Vistara has six of the aircraft on order in total.

Unlike Singapore Airlines and Scoot, both of whom opted for the Rolls-Royce Trent 1000 engines for their Boeing 787s, Vistara has instead selected the more popular General Electric GEnx-1B powerplants for its Dreamliners. Other operators with these engines, which power two-thirds of Boeing 787s worldwide, include JAL and Qantas.

Vistara has chosen the Stelia Symphony product for its Boeing 787 Business Class cabin, with 30 of these seats installed in a 1-2-1 configuration occupying the entire forward cabin section between the first and second set of main passenger doors.

Each seat is upholstered in premium leather and reclines into a fully flat bed measuring 76″, with 20″ seat width widening to 26″ with the armrests down.

Storage is ample with a closing compartment at head height for each passenger, plus a generous side table and headphones hook. There’s even an extendable vanity mirror at each seat.

Seats 5A and 5K are missing a window.

Seven middle seat pairs are arranged in ‘honeymoon’ format directly next to each other at rows 1, 3, 5 and 7, or further apart with each seat closer to the aisle at rows 2, 4 and 6.

Even if you do end up in one of the middle pairs directly alongside one another next to a stranger, a large privacy divider raises between them to maintain good privacy levels. Here’s a video of it in action on SIA’s Boeing 787-10:

These seats are now very familiar to regular Singapore Airlines passengers, with 1,100 of them now flying short and medium-haul routes as the 2018 Regional Business Class product on the airline’s Boeing 787-10 and Airbus A350 Regional jets.

Until now only Singapore Airlines and Turkish Airlines have installed the Stelia Symphony Seat in their Business Class cabins, making Vistara the third airline globally to do so.

Fun fact: Stelia, the manufacturer of these seats, is owned by Airbus, so it’s rather ironic when an airline picks their seats to install on a brand new Boeing aircraft!

If you haven’t tried the Stelia Symphony seat on Singapore Airlines yet, or on the new Turkish Airlines Boeing 787-9s, check out our full reviews covering the solo window seats and the couple middle pairs for an idea of what to expect. 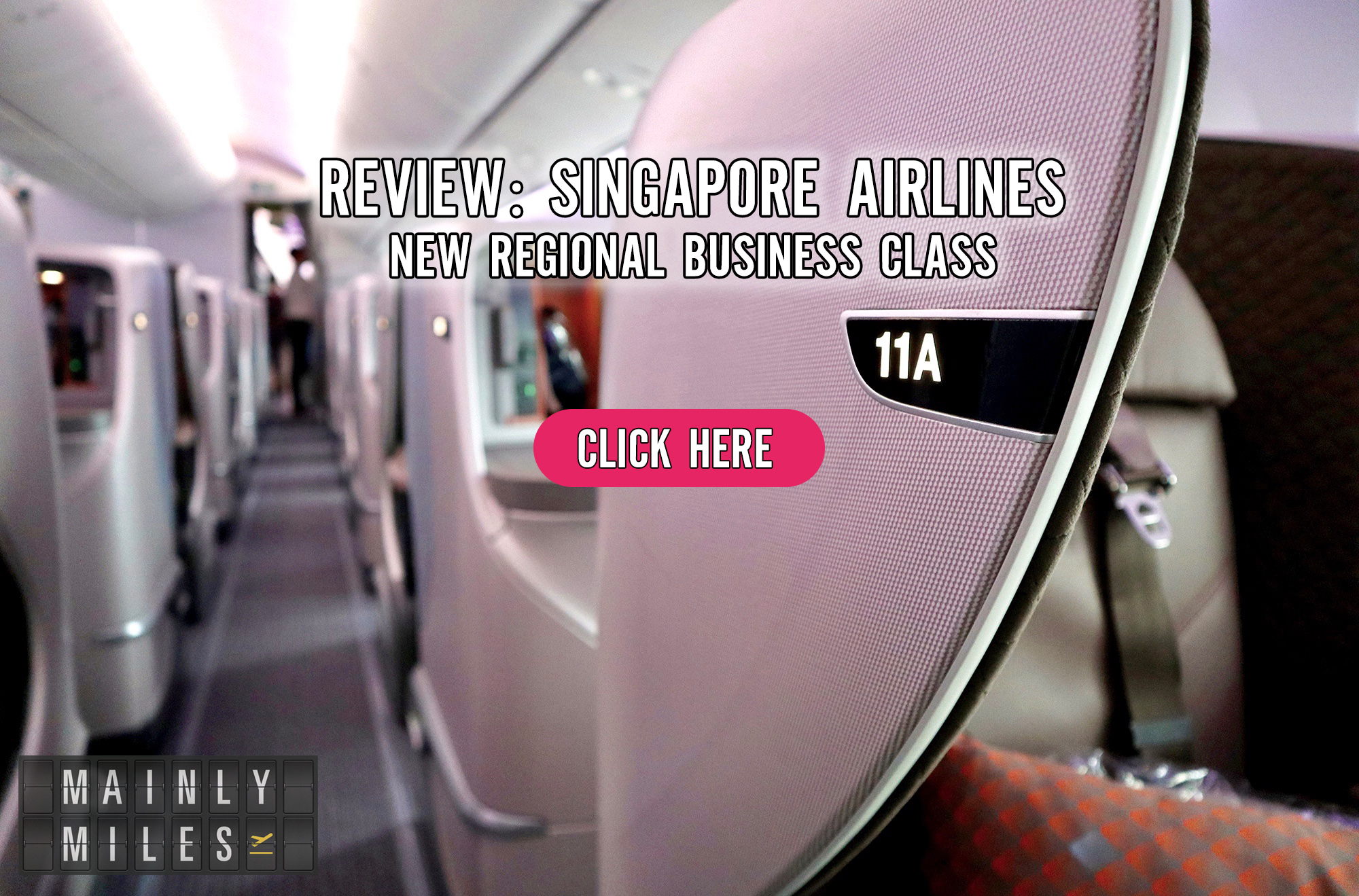 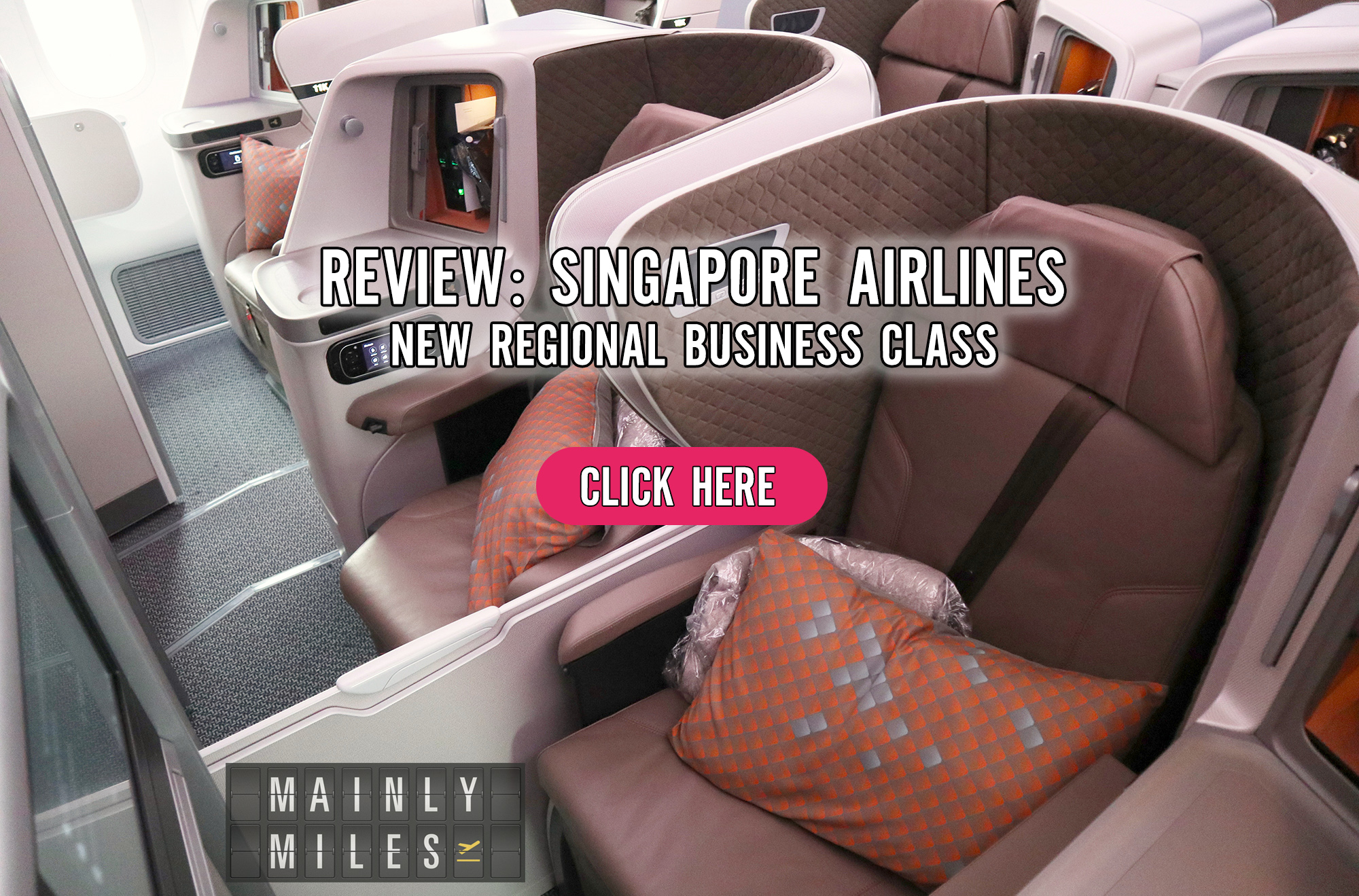 Vistara was the first Indian airline to introduce Premium Economy on domestic flights within the country, and with the advent of long-haul services will also become the first such airline to operate this cabin on international flights too.

The airline has installed a small three-row Premium Economy cabin in a 2-3-2 configuration, for a total of 21 seats. Seat pitch is set at 37″

SIA regulars may not recognise this one so easily.

Here the airline has diverged from the Singapore Airlines Premium Economy seat (a ZIM Flugsitz product on most aircraft, or the Safran Z535 on the A350 ULRs), instead opting for the Recaro PL3530 model also used by China Southern as its Premium Economy seat and JAL for its Boeing 787 domestic Business Class.

IFE is in the form of a 13″ touchscreen, with a universal power socket and USB charging port available at every seat.

Recaro claims the seat “sets the standards for comfort and functionality through its ergonomic shape, flexible equipment options and generous space. Its main comfort features include the individually-adjustable calf rest, seven-inch reclining backrest, and six-way adjustable headrest, which create a relaxed atmosphere for long-haul passengers”.

It’s back to commonality with Singapore Airlines in the Economy Class cabin, with Vistara installing 248 of Recaro’s CL3710 seats in a standard 3-3-3 configuration.

Singapore Airlines was the launch customer for this product on its Boeing 787-10s in March 2018 and now installs the seats, which come with significant weight savings over older models, on its A350 Regionals and newer 3-class A350s.

There’s also a 12″ HD in-flight entertainment screen for each passenger.

Recaro says of these seats: “With features such as the six-way headrest, high literature pocket, and easily-accessible power ports, the CL3710 meets the needs of any passenger.”

Where will it fly?

Initially the aircraft will be used to fly domestically between Delhi and Mumbai, a route on which the airline already operates 101 flights per week, to allow for crew training and familiarisation. The schedule for these services has not yet been published.

The second Boeing 787-9 joins the Vistara fleet in April 2020, with the first long-haul services planned for May.

Vistara is keeping tight-lipped about its inaugural long-haul destination for these new aircraft. Tokyo was apparently set to be one of the first routes, though the latest COVID-19 outbreak has probably put that plan on the back burner for now.

Earlier this week the airline’s CEO Leslie Thng, formerly CCO of Scoot and CEO of SilkAir, said the airline will definitely fly to London in future, which he described as “the jewel of European destinations”, though it’s thought that Paris and Frankfurt are also being evaluated.

Here’s Vistara’s video of what to expect inside its Boeing 787-9 cabins.

You can use your Singapore Airlines KrisFlyer miles to redeem award tickets on Vistara domestic flights, including on the Delhi-Mumbai route using the Boeing 787-9 once the airline confirms which flight numbers will be operated by this aircraft type, for the following one-way rates:

One-way cash fares on this route start at around S$60 in Economy Class and S$350 in Business Class during March, so these award rates don’t look to offer particularly good value, unless you can potentially redeem in Business Class on busier flights at the last minute, priced at S$500+ one-way.

There are no details yet about international flight award prices on Vistara using KrisFlyer miles (see the current award chart here).

Once we know where they will be flying, we’ll be sure to check out how you can redeem, including whether it’s possible to make a multi-sector award booking such as Singapore – Delhi – London.

The most important announcement regarding Vistara’s Boeing 787-9s is yet to come – where will they fly these new aircraft?

Once familiarisation flights have been completed and two aircraft are in service, the first long-haul route should commence and we’re eager to learn which city they go for.

Europe seems a likely option, with London an obvious choice if the slots can be negotiated, though with the current COVID-19 outbreak almost anything is possible.