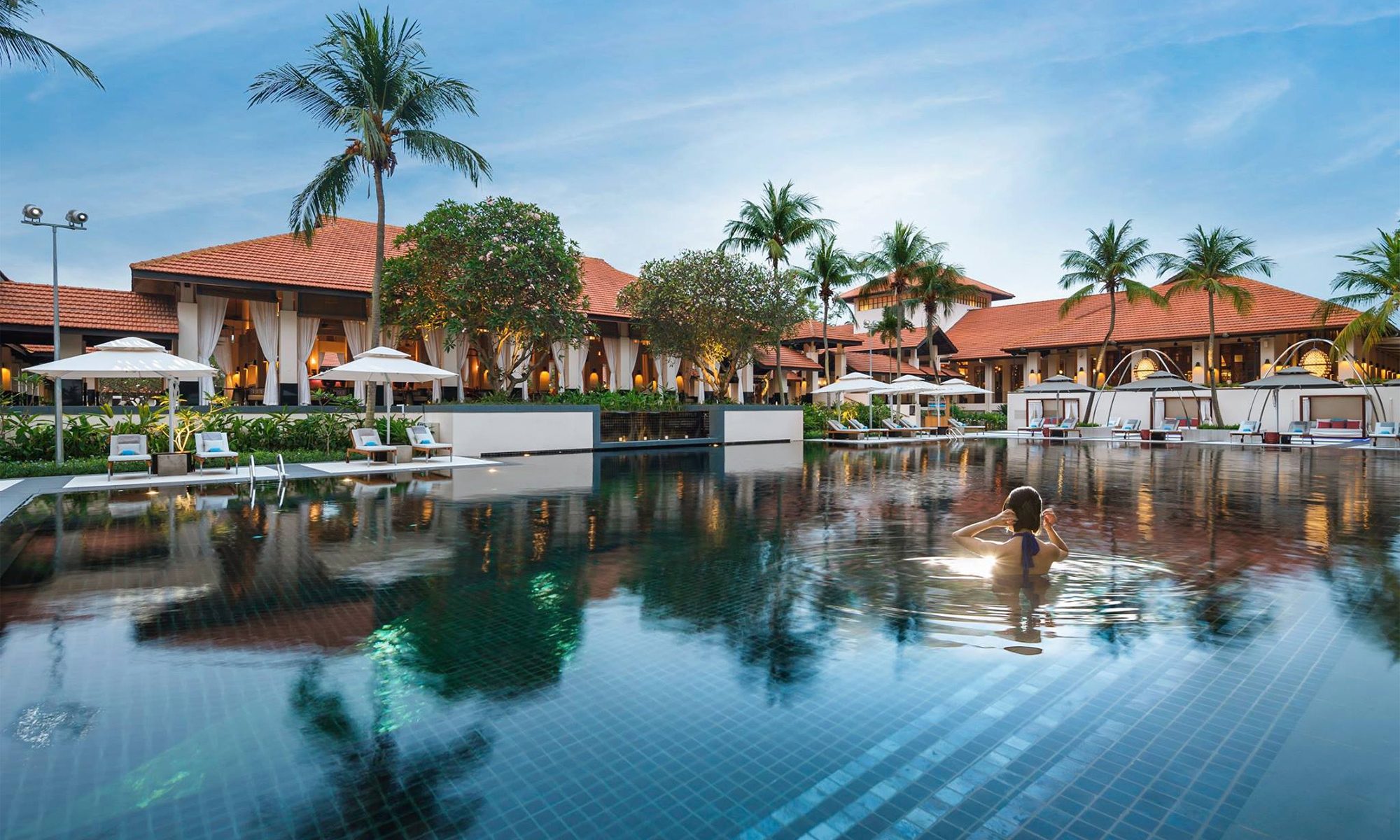 You can earn a fantastic 10 mpd on staycation bookings with DBS credit cards for the rest of 2020, but make sure you're getting a good deal and not missing out on valuable extra benefits 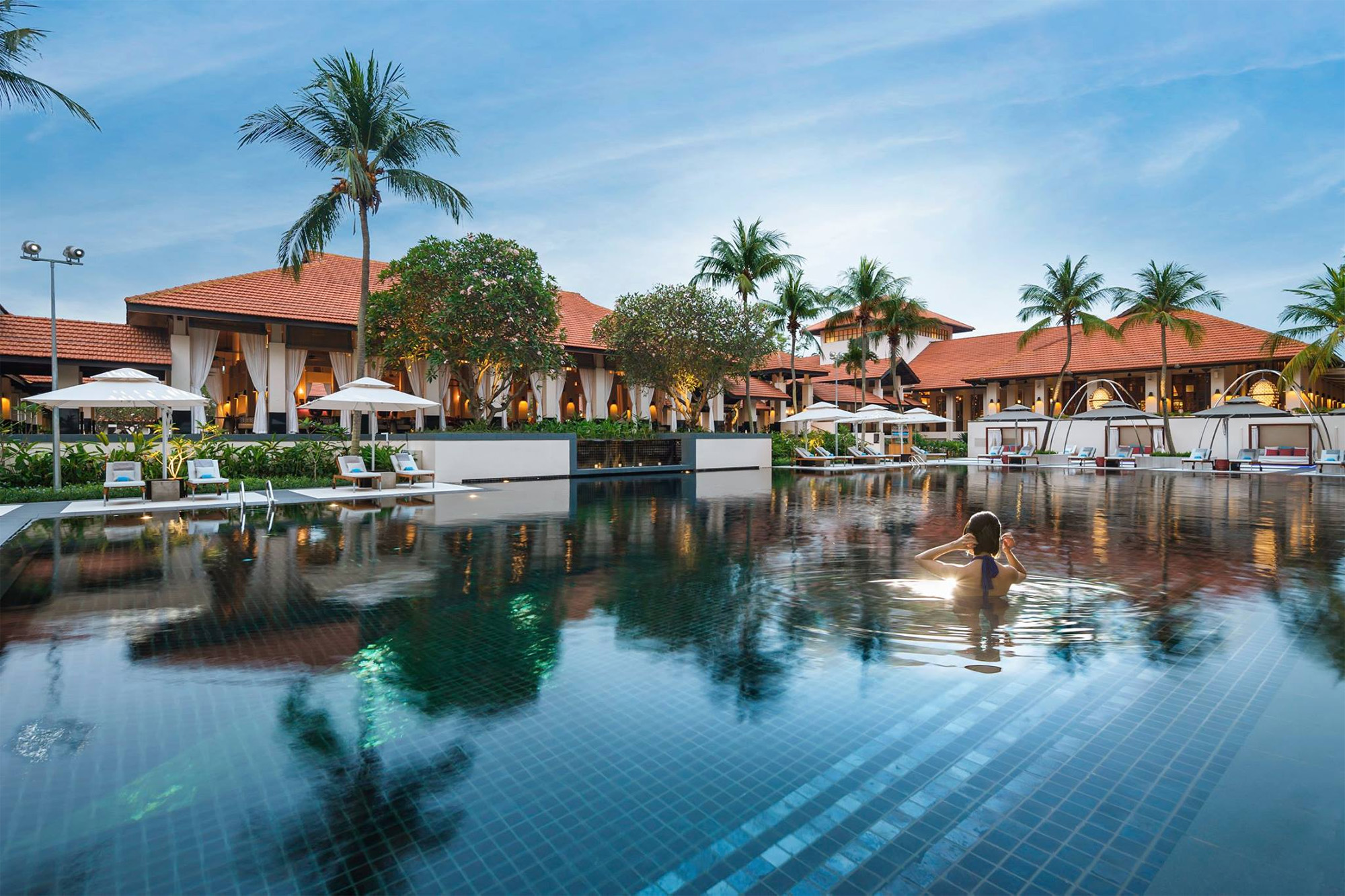 Back in April, just as the coronavirus had put a stop to almost all leisure travel, DBS launched what might have been considered an ill-timed partnership with online travel site Agoda, offering between 4.4 mpd and 8 mpd on bookings made using your Altitude or WWMC cards until 30th September 2020.

It’s probably fair to say there was little interest given the lack of travel opportunities and the uncertain timescales for trips to resume, especially as stays had to be completed within the offer window.

The timescale for overseas travel certainly hasn’t become any clearer in the last three months, however there is now the option to book a staycation at a range of hotels in Singapore.

DBS and Agoda have taken the opportunity to extend their offer to 31st December 2020, while also jacking up the earn rate to an attractive 10 mpd across its miles-earning credit cards for Singapore staycation bookings.

If you hold the DBS Altitude (Visa or Amex), DBS Woman’s World Mastercard or DBS Woman’s Platinum Mastercard, you’ll be entitled to 10 miles per dollar in total spent on local hotel stays completed by the end of 2020. 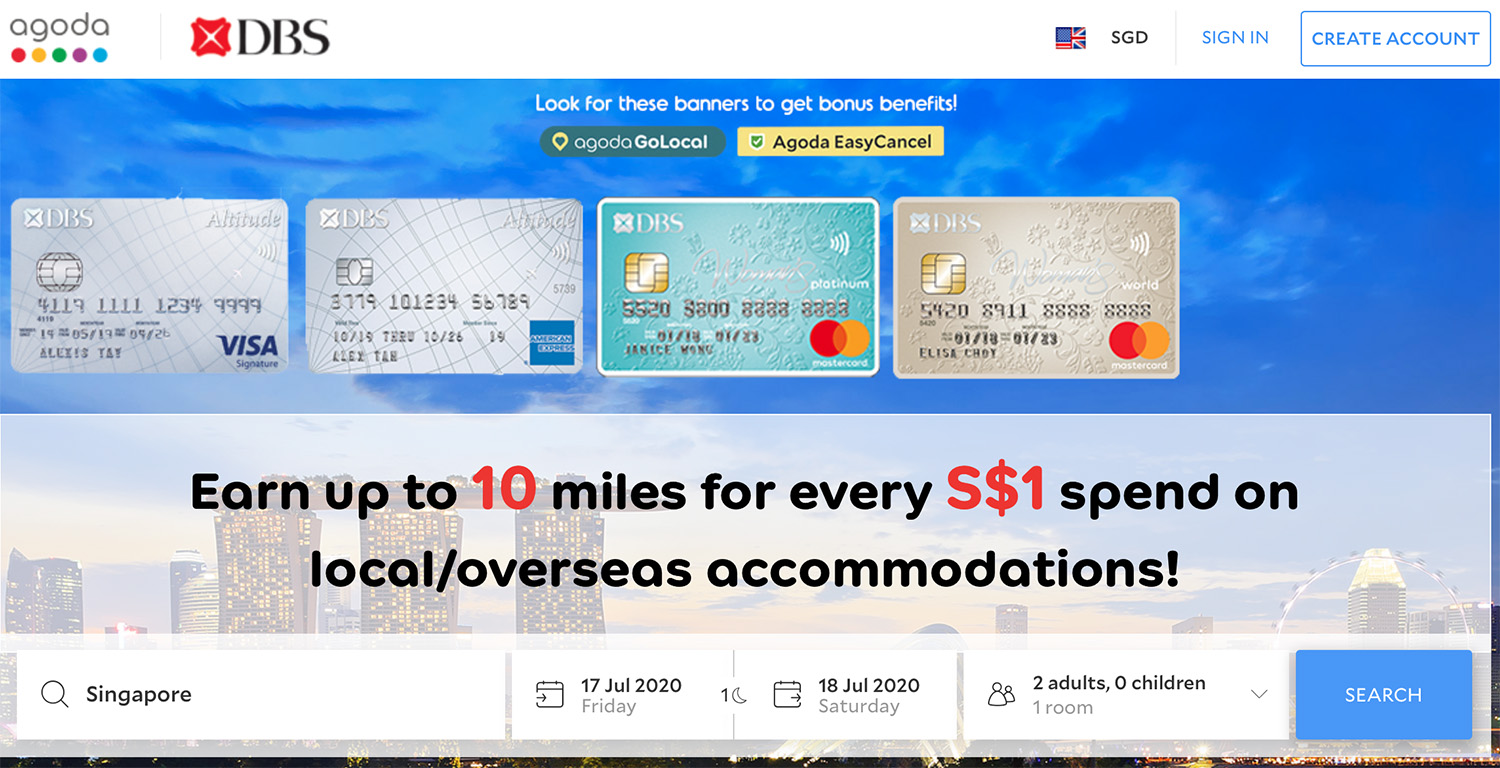 There’s a monthly upper spend limit for each card, after which the rate drops to between 4 mpd and 8 mpd in addition to your card’s basic earn rate, depending on which card you hold.

Let’s take a look at how it works.

As you can see for the DBS Altitude cards this taps in to the bonus 3 mpd earn rate (capped at S$5,000 spend per month) when calculating the 10 mpd total for staycation bookings through this special site.

After that the rate drops to 8.2 mpd, still a generous miles-earning level. See the full T&Cs for the DBS Altitude offer here.

Note that if you have already used some of the S$5,000 monthly allowance on other flight and hotel transactions with your DBS Altitude card, only the amount remaining in that category for the month will earn 10 mpd for staycation bookings using the Agoda dedicated link.

For the Woman’s World card it’s only the first S$2,000 of accumulated spend per calendar month that’s eligible for the 10 mpd rate for staycation bookings through Agoda, thereafter a 6.4 mpd rate applies.

Note that if you have already used some of the S$2,000 monthly allowance on other eligible online transactions with your DBS Woman’s World card, only the amount remaining in that category for the month will earn 10 mpd using the Agoda dedicated link.

For the Woman’s Platinum card it’s only the first S$1,000 monthly spend via the dedicated link that’s eligible for a 10 mpd total earn rate on staycation bookings, though after that it’s still a competitive 8.4 mpd for any additional local bookings through Agoda, the highest ‘uncapped’ rate among these cards.

Note that if you have already used some of the S$1,000 monthly allowance on other eligible online transactions with your DBS Woman’s Platinum card, only the amount remaining in that category for the month will earn 10 mpd using the Agoda dedicated link.

Bookings must be made via the dedicated landing page:

Payment must be made using one of the four DBS credit cards listed above to qualify for the bonus points. You must also provide your bank registered mobile number as per DBS’ records at the time of booking, as registration with incorrect information may result in you not qualifying for the promotion.

Important: Only rates where the payment is made directly to Agoda are applicable, so this won’t work for rates where you pay directly to or at the hotel itself. Look for the “Promo Eligible” tag on the room types search results page.

Taxes and service charges are included in the total cost assessed for the bonus miles, however no other incidental room expenses will qualify.

Assuming you remain within the higher bonus spend level each calendar month (e.g. first S$5,000 of travel transactions for the DBS Altitude card):

As you can see whichever card you use, you’ll potentially be waiting until the end of February 2021 for at least half of the points you would earn from this campaign, so it’s certainly not a fast way to rack up the miles balance.

You can check out which hotels in Singapore are currently taking staycation bookings at our dedicated page, with new properties being continually added to the list.

The wide range of options now includes several hotels in Sentosa like the W and the Sofitel, plus city options including Raffles, The Fullerton Bay and the Shangri-La.

Most of the hotels now open for staycation bookings in Singapore have some form of deal on offer when you book direct. You won’t necessarily get the best rate, nor the additional staycation perks, if you book through Agoda.

While 10 mpd is a very attractive deal, make sure you’re not paying over the odds for the miles (not too much anyway) and not losing out on benefits you would value more, like dining credits, free parking, etc., which may outweigh the miles value for your chosen property if a good staycation deal is on offer when booking directly.

While it seems a little irrelevant at the moment, DBS and Agoda have also extended the bonus miles offer for their previous earn rates on worldwide hotel bookings (i.e. outside Singapore).

For bookings made via the same dedicated Agoda / DBS landing page between now and 31st December 2020, which are also completed by 31st December 2020, here are the earn rates applicable for overseas (non-Singapore) hotels, depending on which DBS credit card you use.

Which loyalty schemes can I transfer into?

DBS Points can be transferred into:

Those three open up a wide range of redemption options across Star Alliance and oneworld alliance airlines.

You can also transfer your DBS Points to Air Asia BIG Points, however the value in this programme is extremely poor in comparison.

DBS has an ongoing bonus miles relationship with hotel booking site Kaligo for its Altitude cardholders, offering 10 miles per S$1 spent as standard (capped at S$5,000 spend per month). That might work out better than this offer, depending on your choice of hotel and the rates available, so remember to check Kaligo first before committing to the Agoda deal.

Always remember the golden rule – check the best available rate directly with the hotel of your choice and other online travel agents like Expedia, as you may find you are paying more to accrue miles with these other sites and the cost per mile must always be justifiable (1.9 cents per mile or less is our personal cap).

We’ve got full reviews of the DBS Altitude and DBS Woman’s World cards (men can get the latter one too!). Check them out for a detailed look at their other features.

Now that a significant number of staycation options are available at hotels across Singapore, the OTA’s are keen to get a slice of the action and this 10 mpd offer with DBS cards and Agoda is indeed a generous one.

If you are looking to book a staycation be sure to check out the rates for your preferred properties under the ‘Promo Eligible’ tag via the dedicated DBS x Agoda booking link, but do make sure to compare with best available rates directly with the hotel as always.

Additionally, consider the benefits of any staycation packages on offer, most of which won’t apply unless you book directly. If you are paying more and / or losing some benefits, make sure the miles you’re getting instead are worth the difference.