Skip to content
The first Singapore Airlines Boeing 737 MAX cabin refit has been completed and more Boeing 777-300ERs are flying, with First Class on offer.

With more Boeing 737-800s joining the fleet, Singapore Airlines was actively flying 86 passenger aircraft in April 2021, a record since the COVID-19 pandemic slashed the operating fleet into the 50s last year.

The 737s are certainly making their mark fast, flying to and from nine regional destinations next month (up from four in March), plus there’s a more advanced version being prepared for service.

The troubled Boeing 737 MAX 8, now cleared to fly in many countries but still awaiting approval here in Singapore, will eventually replace the older 737-800s and the first one to receive the SIA colour scheme and new cabin products has now been rolled out of the hangar.

Meanwhile the wide-body fleet renewal process continued this month, with another Airbus A330 leaving the airline and three brand new Airbus A350 Regionals arriving almost ‘in formation’, to make SIA the world’s largest operator of the type.

The official registered aircraft data in combination with recent retirement announcements and analysis of actual flight movements over the last few weeks allows us to determine the actual ‘in service’ fleet (available to the airline) of 117 planes at 30th April 2021, 86 of which were recently active.

This reflects a future fleet of 117 aircraft, plus future near-term deliveries of Airbus A350s and Boeing 787-10s.

There will also be an unknown number of Boeing 737 MAX 8s joining the fleet in 2021, as the SilkAir merger enters its final stage, while one more Boeing 737-800 will be temporarily added.

Overall the airline was actively using a total of 86 aircraft in April 2021, its highest total since the COVID-19 pandemic began. 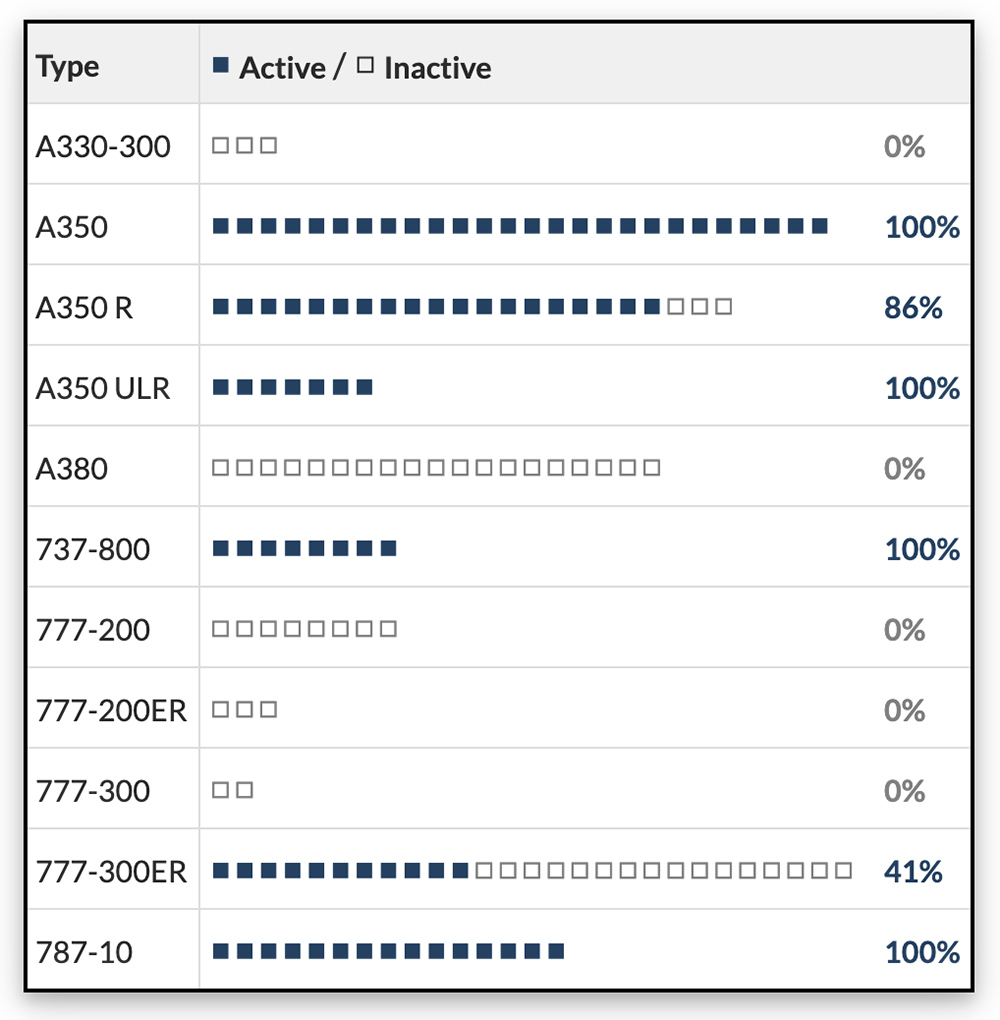 Here’s a look at how busy each aircraft fleet has been, based on active aircraft over the seven-day period from 21st April to 27th April 2021.

Long-haul Airbus A350s are the current ‘workhorses’ in terms of daily flying hours per aircraft, though the Boeing 787s aren’t far off, and operate the highest number of flights per week.

Three A350 deliveries in one day

Earlier this month Singapore Airlines took delivery of three brand new Airbus A350 Regional aircraft on the same day, with each jet touching down at Changi within a four-hour window on Saturday 3rd April 2021 as follows:

This handed SIA the accolade of “world’s largest Airbus A350 operator”, with 55 such aircraft in its fleet – two more than the previous title holder Qatar Airways.

Two of the three new A350s (9V-SHT and -SHU) have now entered revenue service, with only 9V-SHV to join them.

The first Boeing 737 MAX refit has been completed

Aside from a repaint from SilkAir colours, this also involves:

The first aircraft has now had its refit work completed and was pictured at Changi this week sporting its new colours, with the tell-tale Wi-Fi antenna on the roof.

The MAXs are expected to eventually replace SIA’s Boeing 737-800s, for a consistent product and service offering across the narrow-body and wide-body fleets, however the type is still awaiting approval to fly again in Singapore from the Civil Aviation Authority (CAAS).

No timescale for a reintroduction of the aircraft type in Singapore has yet been announced, but hopefully once that does happen we can look forward to a formal reveal of the new cabin products.

At last month’s update there were four Boeing 737-800s in Singapore Airlines operation, though late March and April have seen a doubling of the registered and active fleet to eight aircraft, with the following four newly entering service:

This leaves only 9V-MGM to join SIA as the ninth aircraft, which will then complete the transfer. It flew an air test in SIA colours on 29th April and so will likely enter revenue service in May.

With the fleet steadily increasing, so has the route network for the Boeing 737-800s. As of May 2021 it will cover nine cities (up from four in March), as shown below, including the short-notice transfer of Medan from SilkAir earlier this month.

Recently confirmed future additions include Darwin, Cairns and Da Nang, though the start date for many of these routes is based on the ‘regular’ July 2021 schedule – realistically many will actually slip further into 2021.

Ultimately nine Boeing 737-800 aircraft will be joining Singapore Airlines from SilkAir, with the others set for disposal as the regional wing is gradually wound up in the months ahead.