Skip to content
Singapore Airlines took delivery of another Airbus A350 this month, in addition to bringing home two more Boeing 737 MAXs for refit in anticipation of clearance to fly the jets again soon.

In June 2021 Singapore Airlines took delivery of another factory fresh Airbus A350 Long Haul aircraft, ahead of increased flying for the type in mid-July to Manchester and Rome, while also returning another pair of Boeing 737-8 MAX aircraft from desert storage for long-awaited cabin refit work.

The demise of SilkAir, which operated its final passenger flight in early May 2021, has also meant SIA taking three further Boeing 737-800s onto its books, though these will not join the operating fleet and are currently for sale.

Overall the airline is now actively using 90 of its passenger aircraft, its highest total since COVID-19 decimated schedules, under a positive outlook with travel restrictions set to be relaxed as Singapore residents progressively become vaccinated against COVID-19 in the coming weeks and months.

The official registered aircraft data in combination with recent retirement announcements and analysis of actual flight movements over the last few weeks allows us to determine the actual ‘in service’ fleet (available to the airline) of 115 planes at 29th June 2021, 90 of which were recently active.

These have removed these from the ‘In Service’ column.

Additionally, all currently registered Boeing 737-8 MAX aircraft, which are awaiting re-certification, are excluded from the ‘In Service’ column for the time being.

Almost all Airbus A350s and Boeing 787-10s remain in consistent use, alongside the nine recent Boeing 737-800 deliveries, while the deployment of Boeing 777-300ERs has risen to around half that fleet, now that we know only 23 of the aircraft will return to service.

Overall the airline was actively using a total of 90 aircraft in June 2021, its highest total since the COVID-19 pandemic began. 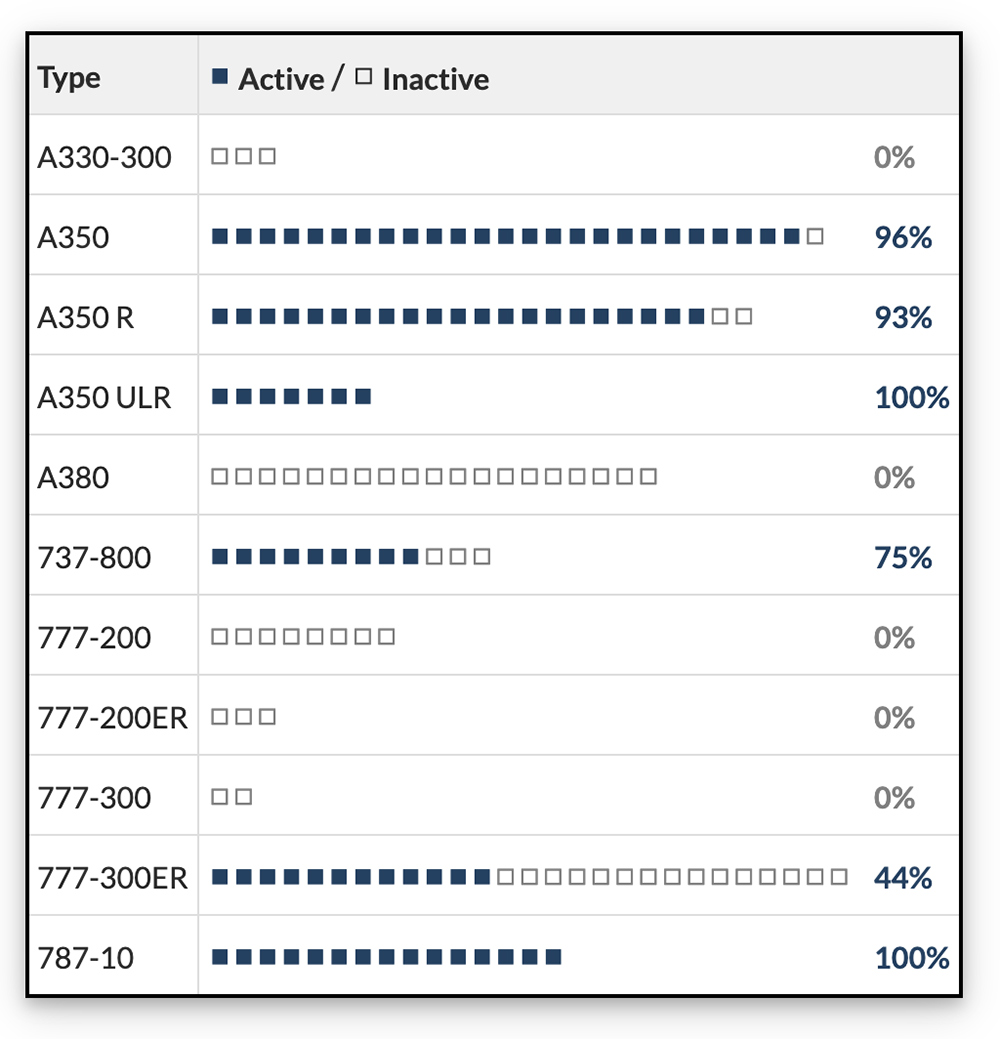 Here’s a look at how busy each aircraft fleet has been, based on active aircraft over the seven-day period from 17th June 2021 to 23rd June 2021.

Average fleet utilisation is similar by aircraft type compared to our May 2021 update, with the exception of the Boeing 777-300ER fleet, with each active aircraft now flying for 8 hours per day on average, up from 3 hours last month.

This is partly due to the relaunch of SQ11/12 Singapore – Tokyo – Los Angeles passenger flights using the type, which occupy 36 hours of flying time round-trip.

Airbus A350s continue to be the ‘workhorses’ in terms of daily flying hours per aircraft, though the Boeing 787s and A350 ULRs aren’t far off.

Another A350 Long Haul has been delivered

On Saturday 26th June 2021 the latest Airbus A350 Long Haul aircraft, 9V-SJB, was delivered brand new from Airbus to Changi Airport, bringing the A350 Long Haul fleet to 27.

This matches the Boeing 777-300ER’s record as the largest sub-fleet in the airline’s history with a single cabin configuration, and solidifies SIA’s position as the world’s largest Airbus A350 operator, with 56 of the type in its fleet.

Only 11 more A350s are due for delivery to the airline, two between now and March 2022 and the remaining nine in subsequent years.

Specific variants for the next pair of aircraft arriving in the current financial year have not yet been revealed.

In our last update we reported on how SilkAir’s Boeing 737-8 MAX aircraft stored in Alice Springs were being transferred to the mainline carrier.

In early July two more aircraft were relocated back to Changi in preparation for their cabin refit work, ahead of recertification by the Civil Aviation Authority of Singapore (CAAS).

According to our sources a second aircraft, 9V-MBC, has now also had its refit completed, with the others inevitably following.

Aside from a repaint from SilkAir to SIA colours, the process also involves:

Here’s 9V-MBA pictured at Changi in late April sporting its new colours, with the tell-tale Wi-Fi antenna on the roof.