Skip to content
SIA's next Boeing 787-10 delivery looks to be imminent, following a 20-month gap since the last new Dreamliner arrived.

What else is new in the fleet this month? Check out our latest rundown.

This month Singapore Airlines handed back another Airbus A330 to its leasing company, brought its last Boeing 737 MAX out of storage in Australia, and test flew a repaired plane for the first time since it sustained damage 20 months ago.

Meanwhile there are signs in Charleston that the next Boeing 787-10 is being prepared for delivery, and overall the airline is now actively flying 95 of its aircraft, its highest total since COVID-19 decimated schedules.

With at least some border relaxations promised in the coming months as Singapore residents progressively become vaccinated against COVID-19, there’s finally light at the end of the tunnel for some quarantine-free discretionary and leisure travel.

That’s good news for the aircraft still in storage, which could be making their way back to the skies soon, including the flagship superjumbos.

The official registered aircraft data in combination with recent retirement announcements and analysis of actual flight movements over the last few weeks allows us to determine the actual ‘in service’ fleet (available to the airline) of 115 planes at 31st July 2021, 95 of which were recently active.

These are therefore excluded from the ‘In Service’ column.

Additionally, all currently registered Boeing 737-8 MAX aircraft, which are awaiting re-certification, are excluded from the ‘In Service’ column for the time being. 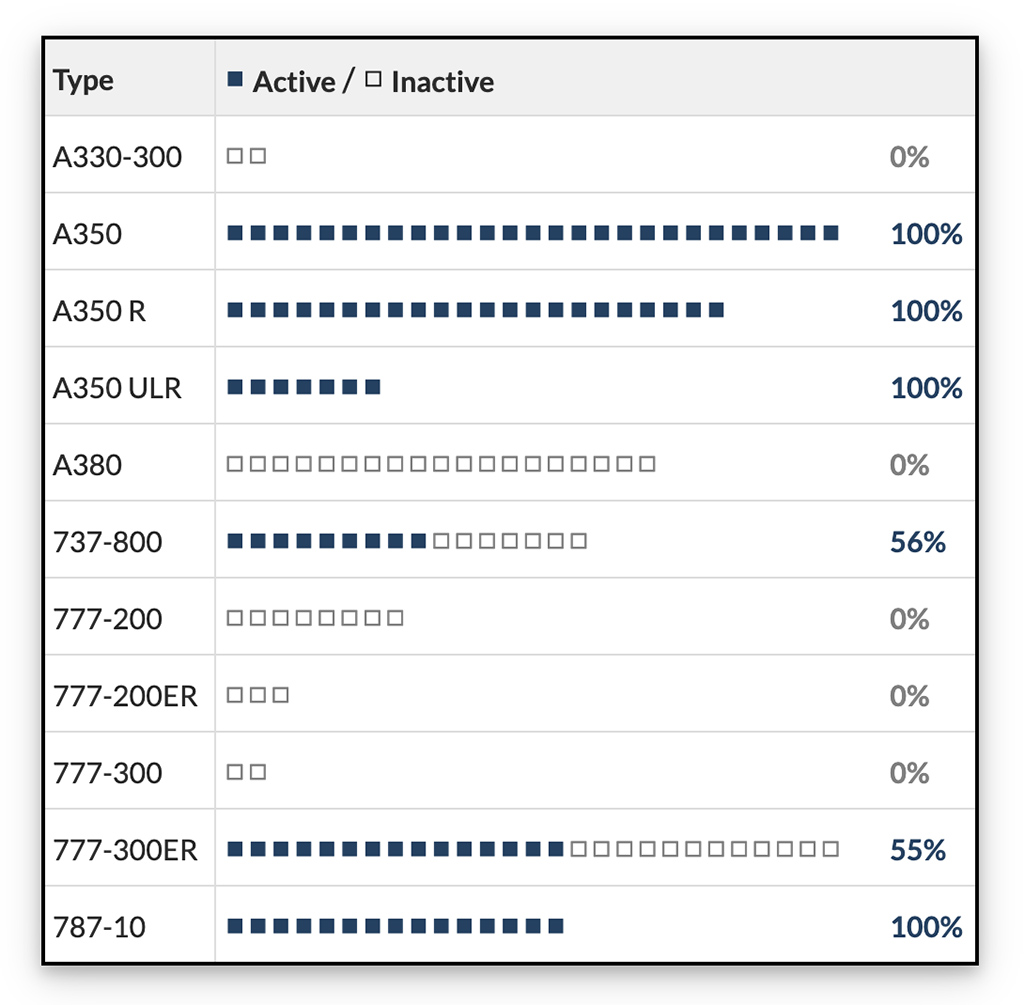 Here’s a look at how busy each aircraft fleet has been, based on active aircraft over the seven-day period from 21st July 2021 to 27th July 2021.

Average fleet utilisation is similar by aircraft type compared to our June 2021 update. Long-Haul Airbus A350s continue to be the ‘workhorses’ in terms of daily flying hours per aircraft, though the other A350s and Boeing 787s aren’t far off.

Here’s a summary of the notable movements we’ve seen in the fleet this month:

Airbus A330 9V-SSG was de-registered and returned to its lessor, Ireland’s Fly Leasing, earlier this month. The aircraft was re-registered in Bermuda as VP-BUW and flown from Singapore to Alice Springs on 15th July 2021, where it is now in storage.

There are now only two Airbus A330s in the registered fleet, 9V-SSH and 9V-SSI, due for return to their lessors in approximately Aug/Sep and Sep/Oct respectively, at the end of their six-year lease periods.

9V-SSI finally made an appearance this month, over a year and a half after sustaining tail damage during a landing incident in Yangon. The repair work was clearly evident when the aircraft took its one-hour test flight on 12th July.

The Airbus A350-900 long-haul fleet was fully active in July 2021, with all 27 aircraft flying revenue services over the last two weeks.