(Update 4th January 13:22: Singapore Airlines have had a change of heart over the credit card surcharge proposal, and have now announced that it will not go ahead as originally planned on 20th January. See here for details.)

In a seemingly rather desperate attempt to raise revenue, a 1.3% credit card surcharge will now be applied to some Singapore Airlines and SilkAir bookings originating in Singapore. The news broke rather subtly, as some website users noticed a note at the top of their screens, starting on 3rd January.

The change becomes effective on 20th January, coinciding with a raft of other changes to fares detailed in full in our recent article. Needless to say – much of that wasn’t good news either. After all – companies rarely manage to squeeze more money out of you and make you happier at the same time.

It’s been very poorly explained by Singapore Airlines and actually affects a relatively small group of customers (probably less than 10% of bookings, and only the very cheapest) so the confusion is understanding.

Note: The notice has since been updated on the Singapore Airlines website. Instead of “certain fares”, to clarify it only affects “Economy Lite fares”.

The devil is in the detail on this one. As per the terms and conditions of the website:

The last sentence is crucial and along with some others, we at first overlooked this too when we started writing on the issue.

Remember those new fare code assignments we told you about in our major fare shake-up article? Well here they are again:

In the aviation industry as a whole? No, certainly not.

Have any other full service carriers gone down this route? Yes, several. Notably, British Airways currently charges 1% (capped at £20, about S$36) but interestingly, from 13th January 2018, this will be illegal in the UK and will have to fall to nothing. New laws have been put in place to stop this unscrupulous business practice. Is it too much to hope that the Singapore government stands up and follows suit?

Is it new for Singapore Airlines? Nope! This practice actually began on 1st April 2009 (and it wasn’t an April fools!), in Australia. An AU$25 flat fee, per passenger, per ticket was applied when using a credit card for all tickets issued in Australia. When fixed fees were banned by the Australian reserve bank in 2016 – it became 1.35%, capped at AU$70.

In fact, it is standard for SIA across all of these countries and it applies to all tickets types (with the exception of Singapore, again it’s not very clear from the table). 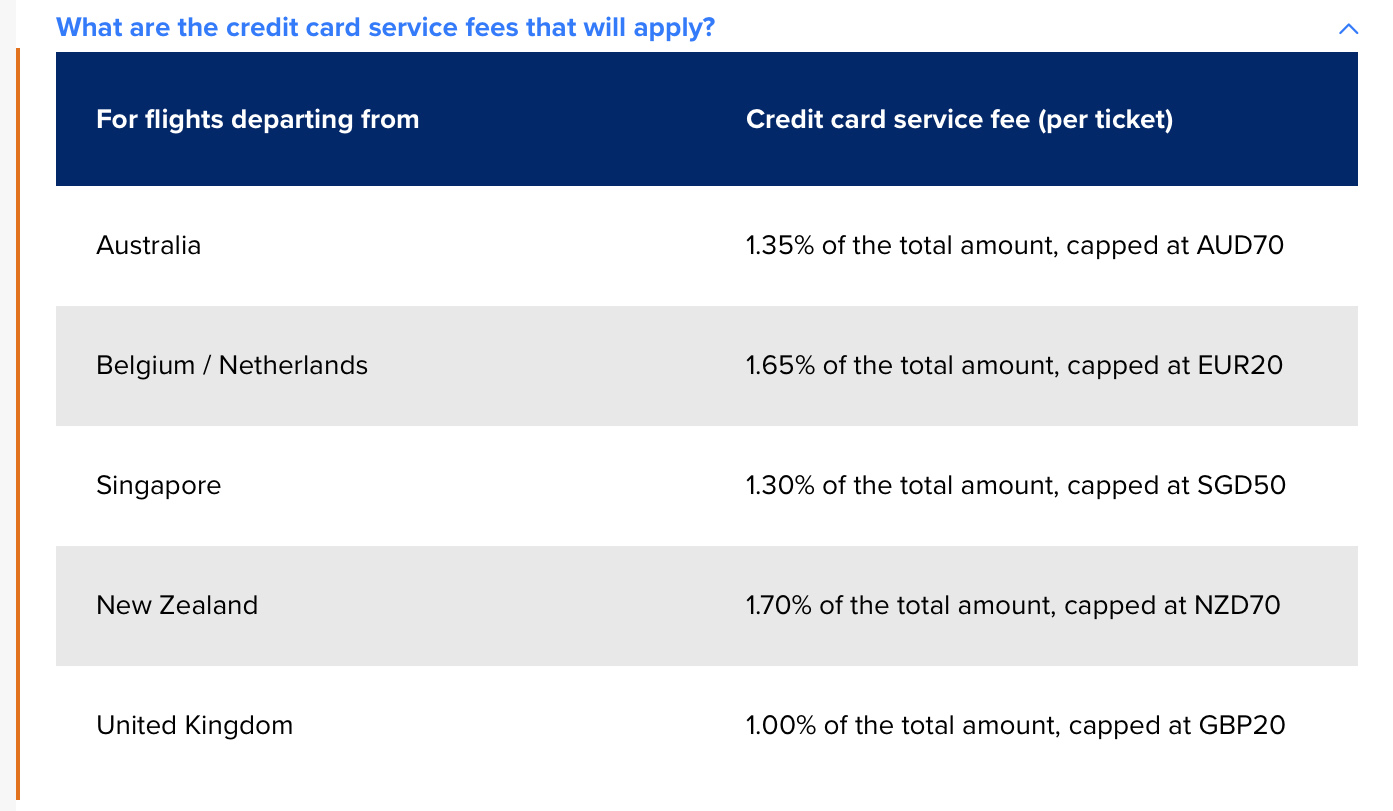 So in fact, booking ex-Singapore, is still mostly free of credit card surcharges!

How much are Singapore Airlines paying credit card companies themselves?

Typically Visa and MasterCard charge a 1% levy. This is how they make the money themselves, on top of the interest, annual fees etc. The margins are very tight which explains why there is only a small host of successful companies e.g. Visa, MasterCard, American Express and… Diners?!

However, according to rumours, due to the volume of transactions that Singapore Airlines (and all other major carriers) generate for the credit card companies, they have negotiated rates far better than the standard 1%…

So realistically, if you’re paying 1.3%, most likely a good chunk of that is just going to bolstering the SIA bottom line!

Sounds vaguely similar to the “fuel surcharge”, which persisted long after the cost of oil dropped to less than a third of when it was introduced.

PayPal – at the moment the Singapore Airlines website allows you to proceed with bookings (i.e. in locations where credit card surcharges already apply) to PayPal and then pay via credit card – which appears to circumvent the surcharge. However, a number of other airlines have already caught on to this concept (try avoiding the fee when paying with flybe via PayPal), so we don’t expect it to be long before this loophole is closed.

KrisFlyer Co-brand Amex Cards – if you own one of these, then your relationship will save you from paying the 1.3%. And frankly, given how poor the standard miles earn rate associated with these cards is, it’s the least they could do for you!

Redemption Bookings – These will not incur any credit card payment fees, regardless of the class of travel booked. Phew!

Another kick in the teeth for those booking the cheapest economy fares from 20th January onwards, as if paying for seat assignment wasn’t enough. At least they’ll now earn 50% KrisFlyer miles (up from the current 10% rate), but like everything in life it seems there’s no free lunch.