Skip to content
Vietnam Airlines is now flying its long-haul Business Class seats on a daily A350 flight from Singapore. How does the product stand up against the competition? 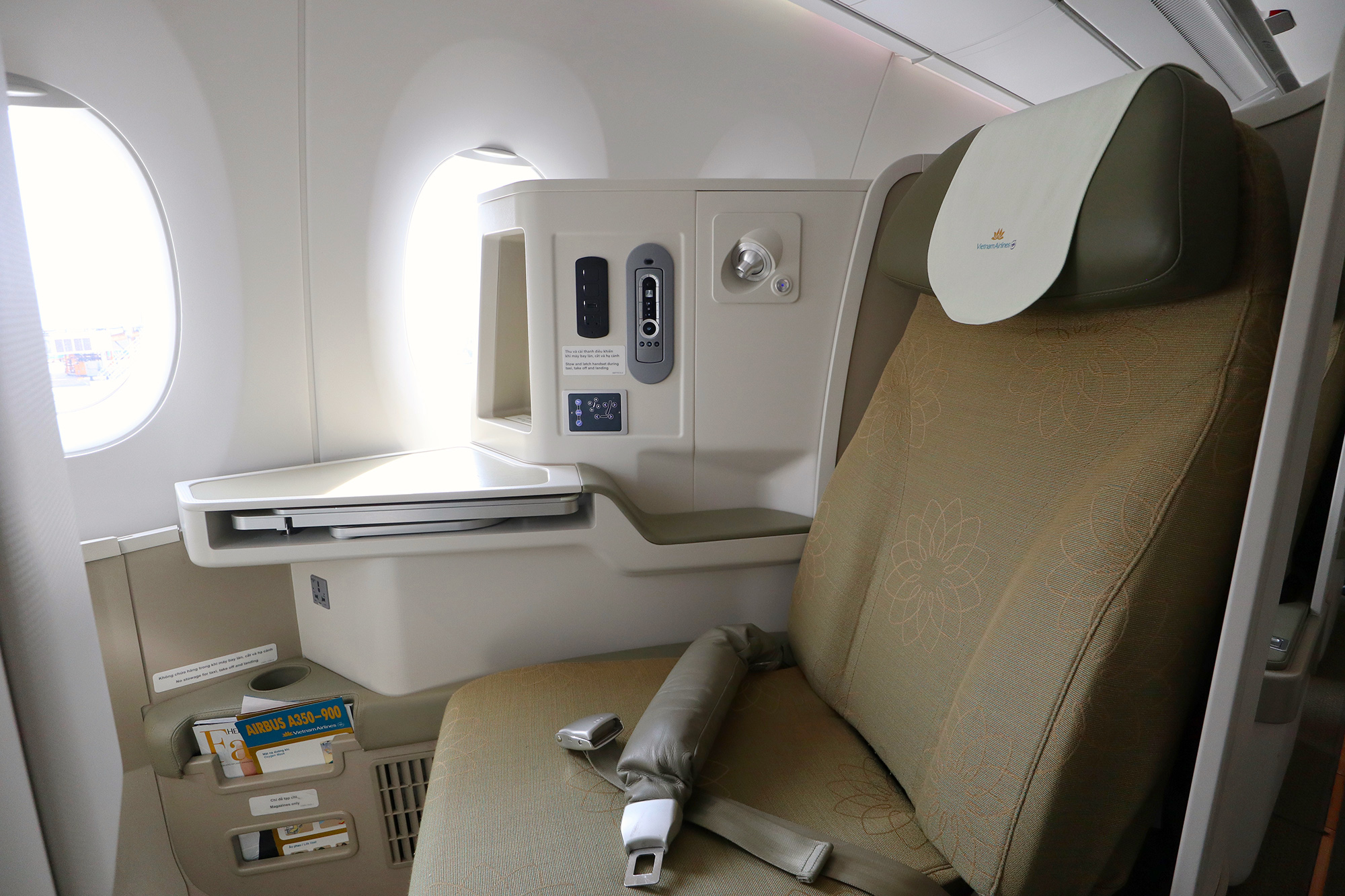 Last month we took a much needed vacation, and rather than hop around from place to place and flight review to flight review as usual, we decided some solid R&R time was called for.

We booked nine nights at the wonderful Six Senses Con Dao, Vietnam, a resort we’d meant to visit last year but never got round to. It was a fantastic experience and we’ll have a review for you soon.

Right at the start of 2019 we reported that Vietnam Airlines was switching their evening Singapore to Ho Chi Minh flight across to the Airbus A350 from March 2019, featuring long-haul flat-bed seats with a 1-2-1 layout in Business Class.

Since these seats are now the mainstay of the Vietnam Airlines long-haul fleet, it was the perfect opportunity for us to review them on the same trip, so we booked the flights and did just that.

Vietnam Airlines uses Terminal 4 at Changi Airport. Check-in desks are located at row 2 (door 2 drop-off). The desks open at 10.30am each day until the last flight departs, and you can check in for your flight at any time during this window.

There is a dedicated desk for Business Class and another for Sky Priority members.

When we arrived just after 2pm there was no queue. We were very early for our flight as we wanted to head across to T3 and use our Priority Pass to review the new Marhaba Lounge, which had recently opened. A very nice addition, it’s also becoming the temporary Singapore Airlines KrisFlyer Gold Lounge from the end of this month to cover for the new lounge construction until mid-2021.

You can read our full Marhaba Lounge review here.

Vietnam Airlines uses the Blossom Lounge at T4 for Business Class and Sky Priority passengers. We reviewed it shortly after opening in 2017, and nothing significant has changed.

Do bear in mind that if you were thinking of checking in early for your Vietnam Airlines Business Class flight and spending a few extra hours in the Blossom Lounge, access on your lounge invitation is restricted to 3 hours prior to your flight departure time.

Boarding for our flight commenced at around 8.05pm, through a dual airbridge gate with a dedicated forward door for Business Class passengers.

The process is easy at Changi T4 because there is no security check at the gate (T4 has central security control after immigration).

We were flying on the newest Vietnam Airlines A350, delivered only three months before our flight. As such all the fixtures and fittings were in good condition.

Those familiar with the Cirrus Business Class seats, used by airlines including Cathay Pacific, Finnair and Japan Airlines, will feel immediately at home on boarding the Vietnam Airlines A350.

The reverse herringbone seats are in a 1-2-1 configuration, with window seats facing away from the aisle.

The middle seats also face away from the aisle, towards one another.

The colour scheme is mostly white or cream, while the carpet and seat fabrics are in the airline’s pastel green / olive green. This won’t be to everyone’s taste but we found it quite relaxing and inoffensive.

After taking a few cabin pictures we settled in to our middle pair, seats 3D and 3G. The crew came round to offer boarding drinks, a choice of Champagne, juice or water.

We both opted for a glass of Champagne, the Heidsieck & Co Monopole. Not the best, but not the worst either.

Cold towels were also provided and newspapers were offered, a choice of The Straits Times and some Vietnamese options.

There were also some magazines provided at the back of the cabin, behind the middle seat pair in row 7.

The cabin was relatively quiet with only 11 of us flying Business Class that evening, a busy load on the usual Vietnam Airlines A321 operating to Ho Chi Minh but less than 40% load on this much larger A350.

One thing you’ll notice if you’re sitting in the middle seats and travelling with bulky carry on luggage is that there are no overhead lockers in the central ceiling section of the Business Class section on this aircraft. You’ll have to share locker space with the window passengers.

Before we plough too far into this review, it’s important to note that Vietnam Airlines actually has two different seat types installed on its fleet of 14 Airbus A350 aircraft. The airline chose the Zodiac Cirrus seats for all its Airbus A350s and Boeing 787s when it initially ordered them, but there was a problem.

The first four A350 aircraft arriving in 2015 had to be delivered with the Stelia Solstys seat, to ensure delivery was not delayed. It was a stopgap solution due to the well documented supply issues affecting Zodiac seats worldwide at the time.

These alternative seats are in an all-forward facing staggered layout, not dissimilar to the setup typically used for the Thompson Vantage XL seats (e.g. Qantas A330 Business Class).

These four older aircraft are generally deployed on domestic Vietnam and short intra-Asia flights for the airline, including flights to and from Japan and South Korea. They occasionally fly on the Singapore route too, about 25% of the time from our observation.

The newer 10 A350 aircraft with the Cirrus seats installed are almost always used on long-haul flights to Europe and Australia.

We were hoping to have one the two flights on this trip operated by an aircraft with the Stelia seats so we could compare the two, but alas both had the new seats and so that’s all we are reviewing here.

There are 29 seats in the Business Class cabin on Vietnam Airlines’ A350 aircraft. Aside from the oldest four aircraft in the fleet, the remaining 10 newer planes like the ones we flew on feature the Safran Seats (formerly Zodiac) Cirrus product.

These are also installed on all of the airline’s Boeing 787s, with only minor differences.

You’ll notice that unlike some more customised versions of the Cirrus seat, like Cathay Pacific’s version, there is no privacy ‘wing’ installed at the head area of the seat shell on this one. That makes the experience a bit more exposed and less private.

There is a fixed armrest furthest from the aisle, and at the aisle side itself a retractable armrest, which is stowed flush with the seat on boarding for ease of access.

Pressing the button at the end of the armrest allows you to raise and lower it, but there are no intermediate positions – it’s either fully up or fully down.

At each seat there is a side console, closer to the window at the window seats and in between the middle seat pairs. Here you have your reading light, IFE controls, seat controls and a USB and headphones socket.

The adjustable reading light moves through most angles and pushing the button alongside switches it between either a bright or dim intensity setting.

At the forward part of the console there is a hook and clip for your headphones, though these weren’t provided on this short flight.

Some airlines have a more customised specification in their Cirrus seats at the console area, like Cathay Pacific who have installed a closing door compartment for device / passport storage.

The Vietnam Airlines one by contrast is quite simple and you’ll have to look for other storage areas for most of your smaller items.

Ahead of the console is a fixed side table, suitable for drinks or keeping personal items close by in flight.