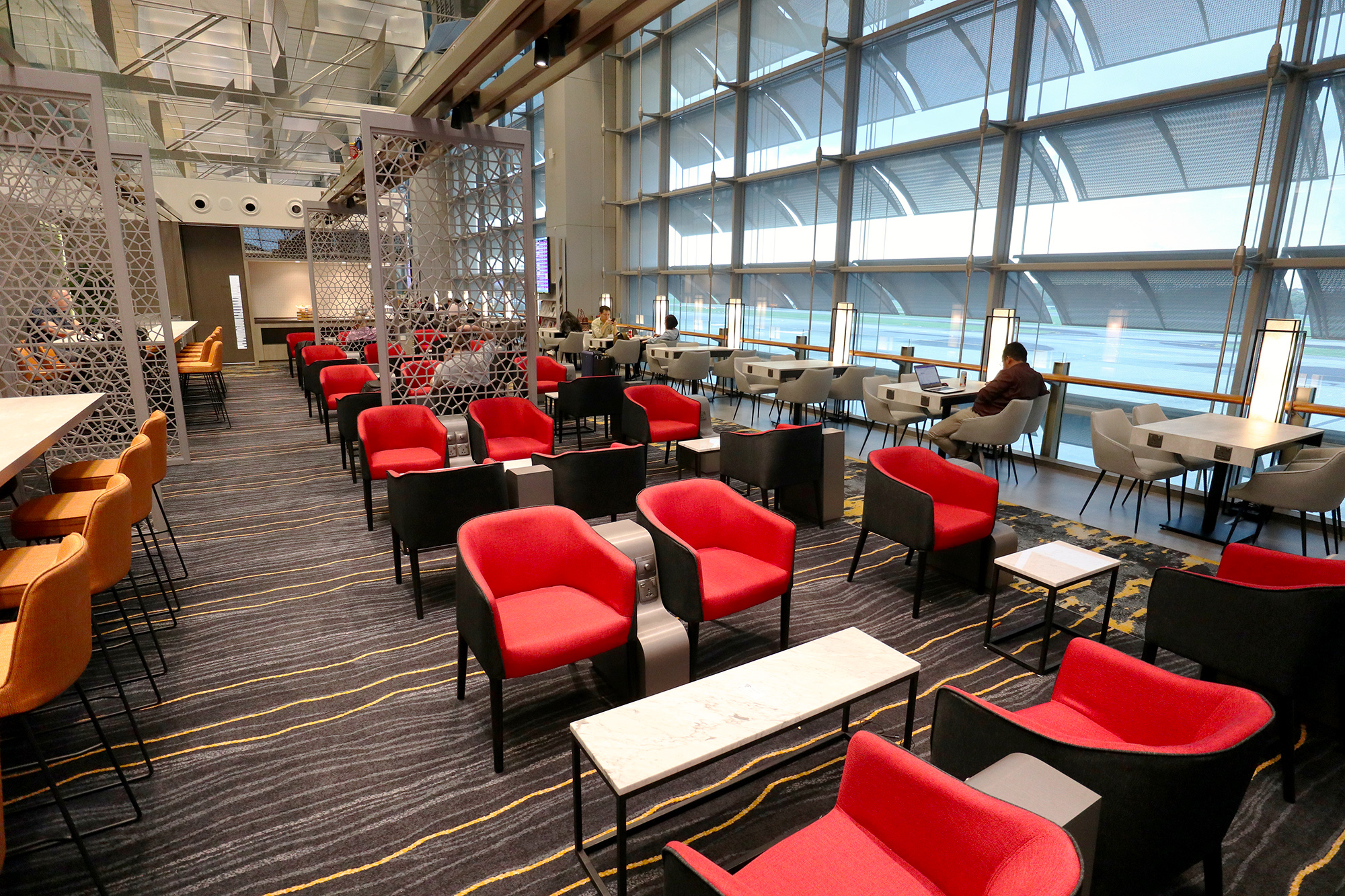 If you’re departing from Terminal 3, you’ll probably be used to turning left once you’ve cleared immigration, then heading up the escalator to the Singapore Airlines, SATS, DBS Treasures and former Dnata lounges.

The Marhaba Lounge is actually in a different location. There are two ways to get there, the easiest is to go up the escalator to Level 3, ahead and slightly to your right if you are coming from the immigration hall.

The escalator is easy to find, just to the right side of the large Louis Vuitton shop.

The lounge is then on your left as you reach the top of the escalator. Just a few steps along is the lounge entrance.

If you’re arriving at Changi T3 on a connecting flight and making your way to the Marhaba Lounge, you can use the ‘Louis Vuitton route’ above or alternatively go up the escalator to Level 3 towards the ‘Singapore Food Street’ eateries, then take a left turn all the way through the corridor leading to the toilets to reach the lounge entrance.

It’s a slightly less glamorous route, but it may save a minute or two especially if you’ve come from the ‘B’ gates or the SkyTrain. The lounge is signposted at either escalator so you won’t get lost.

Marhaba is the new name for Dnata lounges worldwide. Dnata is part of the Emirates Group, and previously the Marhaba branding was only used at five lounges, all five third-party ones at Dubai International Airport.

The group is now replacing the Dnata branding to Marhaba at newly opened and re-opened lounges, including this one at Changi.

The lounge has seating capacity for 130 passengers. Opened on 23rd May 2019 to little fanfare, Dnata formally announced the lounge in a press release over three weeks later.

Strangely, despite opening in May, this lounge remains slightly secret. Changi Airport Group confirmed to us in early June that it had opened the previous month, replacing the Dnata T3 lounge, however it still remains missing from their list of lounges at Changi (we did point this out!).

The Marhaba services website will sell you a pass to this lounge, but still refers to it as the Dnata Lounge T3!

Some lounge access schemes are still showing the old lounge name, location and photos. This should be progressively updated but if you are directed to the Dnata T3 lounge by one of these providers, head for this one instead.

You will be invited to use the Marhaba Lounge if you are flying in Business Class or First Class, or hold sufficient frequent flyer status with the airline or respective alliance, when departing on the following carriers:

You can also enter the lounge using one of the following lounge access programs:

In all cases when accessing through one of these programs, a maximum 3 hour stay is enforced.

Paid access is possible with at least 24 hours notice through the Marhaba website, at the following rates:

Note: The price seems to fluctuate slightly day to day due to exchange rates.

Just be aware the website still calls this the ‘dnata Singapore Lounge Terminal 3’.

Another aspect to note regarding the paid access via the Marhaba website is that it will ask for your flight details, and offer you an appropriate lounge based on your departure terminal.

If you are flying from T1 for example but still wish to pay and try this T3 lounge, you will have to falsify your flight details, otherwise your lounge access voucher will only be good for the Dnata T1 lounge.

There is no walk-up paid access to this lounge. This is opposite to what the Marhaba helpline in Dubai informed us on the phone a few hours before our visit when we called to check. We were assured that paid access at the lounge reception was “absolutely” possible if you made last minute plans (since you cannot pay and book online within 24 hours of your visit).

The lounge staff confirmed this is in fact impossible, they have no means to accept walk-up paid access and in Terminal 3 only the Ambassador Transit lounge permits this.

We were flying on Vietnam Airlines from Terminal 4, but we wanted to try out the Marhaba Lounge since it’s the newest such facility at Changi. The only snag with that, as ever, is the location of T4 itself.

You’ve probably noticed that none of the T4 airlines participate in the Jewel Early Check-in program. That’s because if you’re flying with an airline from T4 you are not allowed to access the transit area via the T1/T2/T3 departure channels. You must clear immigration and security in T4, then proceed on the airside bus to T2 if you wish to visit the T1/T2/T3 transit area.

Luckily Vietnam Airlines does allow ‘all day’ check-in from 10.30am at its desks in Terminal 4, which remain open until 7.30pm for the last departure, so even though we were taking the evening flight (8.45pm) to Ho Chi Minh on the A350 we could check-in any time during that window.

That gave us plenty time to visit T3 and review the Marhaba Lounge. After checking in at 2.20pm and going through the convoluted terminal transfer process, we arrived at the lounge just before 3pm.

We used our Priority Pass to access the lounge.

The first section of the lounge on the left side as you first enter from reception is the ‘Quiet Zone’.

It’s slightly shielded from the rest of the lounge by the entrance corridor and toilets / showers, which can also be found close to reception, and is furthest from the dining and main seating areas which are at the opposite end.

The quietest section here with the most shielding from the rest of the lounge is against the back wall, where you’ll find two pairs of recliner seats. We’d recommend these for the most peaceful visit especially if you do plan to close your eyes for a while.

Finally this section also features some stool chairs along a high table against the window, with views of the aircraft parked at Terminal 3 and one of the runways.

You can see through the outside ‘sunshade slats’ more clearly than the photo suggests. This is an ideal place to get some (quiet) work done and we sat here for most of our visit. We also found the high tables ideal for eating.

As you progress into the lounge you’ll walk through the dining area. This is where you’ll find all the food and beverages offered along one long wall.

Directly opposite there are dining tables each accommodating up to four guests, with window views.