Skip to content
Qatar Airways 'Super Wi-Fi' is offered on all Singapore-Doha flights. How fast is it?

Just over a year ago I flew from Frankfurt to Doha on a three-month-old Qatar Airways Airbus A350-1000 to review the (then brand new) Qsuite Business Class product. While I certainly had very few complaints about the seat itself, it was hard to come to the same conclusion about the in-flight Wi-Fi; it was spectacularly slow.

Given that it had cost me US$20 and was close to unusable, that was disappointing to say the least. In three separate speed tests on that flight, I never managed to achieve a download speed greater than 0.35 Mbps. That’s an impossibly slow connection for getting anything constructive done online.

When Qatar Airways claimed a “game-changing” GX Aviation inflight broadband with speeds of up to 50 Mbps being progressively rolled out on its fleet, it’s safe to say we were sceptical based on past experience.

This recent trip was our first chance to give it a try.

According to Qatar Airways, at least one aircraft is being refitted with the latest Wi-Fi (and typically Qsuite Business Class) at any one time, so the retrofit is still happening.

None of the airline’s Airbus A380s or Boeing 787s have the Qsuite, or the ‘Super Wi-Fi’ system installed.

To complicate matters further, some non-Qsuite A350-900s and 777-300ERs have apparently had the Wi-Fi upgrade, but are still awaiting the cabin (Qsuite) upgrade. Let’s just keep things simple – if your flight has Qsuites, it has ‘Super Wi-Fi’.

Singapore is an all-Qsuite route

Since July this year, all three of Qatar’s daily Singapore – Doha flights feature the Qsuite on the Airbus A350-1000, with occasional substitution to Qsuite-equipped A350-900s. 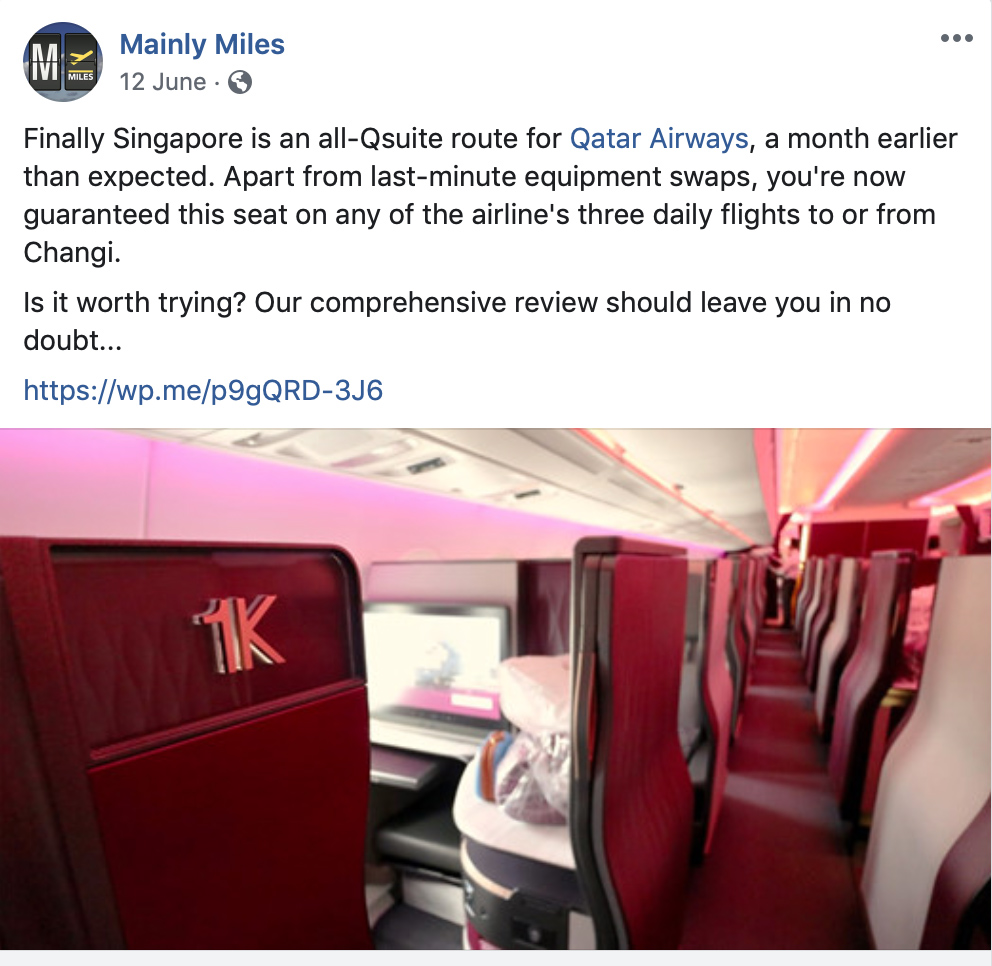 Make sure you’re following us on Facebook to make sure you’re keeping up to date with news like this, as we don’t always write an article about everything.

On our Singapore to Doha Qsuite flight, also on the A350-1000, we didn’t really use the Wi-Fi. Instead we just enjoyed the double suite, chatted over dinner then got some sleep before landing.

10 days later it was a different story, the vacation was over and fresh from an 8-hour layover in the Doha airport transit hotel it was time to get back on board the A350-1000 for our 7-hour flight back to Singapore.

I had plenty of work to catch up on, so using the in-flight Wi-Fi was a must.

The first thing to note is that all passengers flying on a Qatar Airways flight with this system installed get 1 hour of free unlimited Wi-Fi allowance.

That applies from the moment you sign up (i.e. it doesn’t have to be the first hour of the flight itself), so if you only have a small amount of work to catch up on or messages to send you can do so later in the flight if you wish without any payment being necessary. The clock starts ticking from the time you first connect.

Once your free hour has expired it’s US$10 for unlimited Wi-Fi for the rest of the flight, with no data cap. That’s very generous in our opinion, with Singapore Airlines imposing a 100MB limit for a similar price (US$9.99) on most of its Wi-Fi equipped aircraft.

Apparently a US$20 option may be offered on some routes, but it’s difficult to imagine which flights this applies to given that Ben from One Mile at a Time also had the US$10 unlimited data option on the airline’s fourth-longest flight, the 16-hour stretch from Doha to Dallas.

You can easily connect to the Wi-Fi system with any internet enabled device, be it your phone, tablet or laptop. Just join the ‘OnAir’ or ‘OryxComms’ network and you will be redirected to the sign-up page. 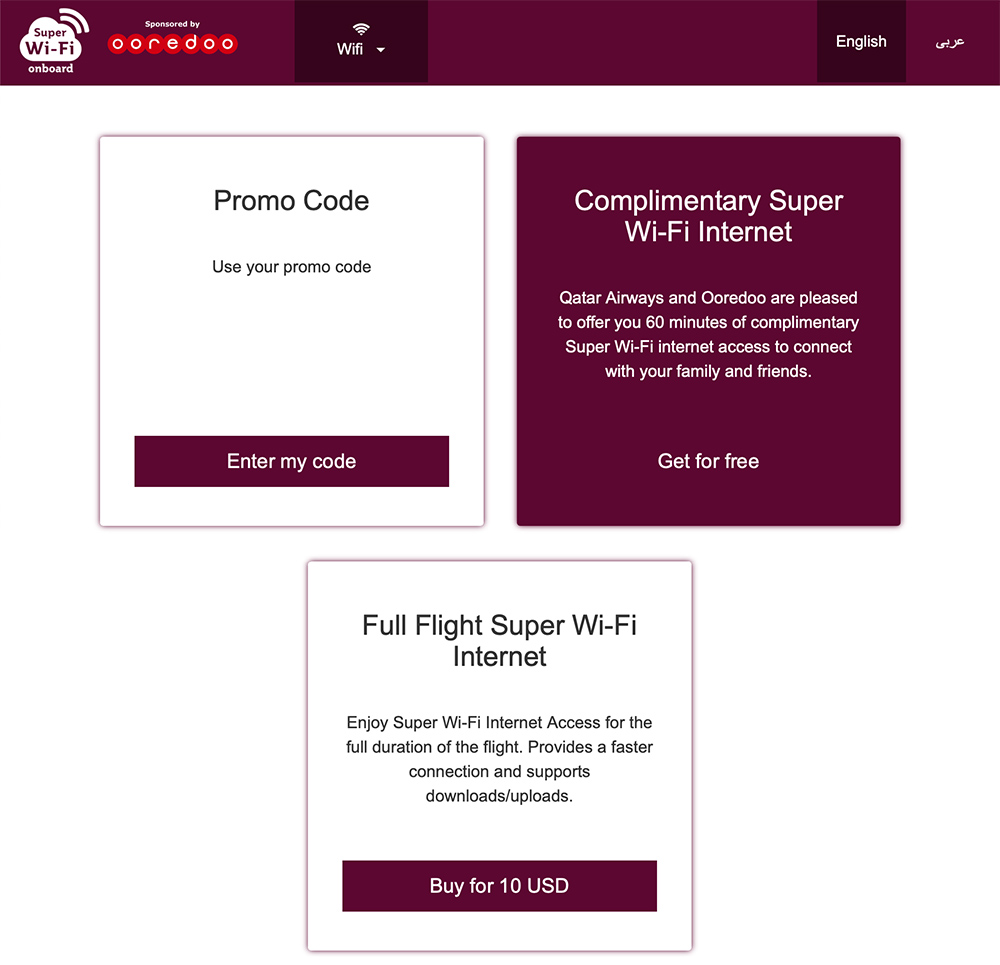 You may as well start by using the free hour, in case you suddenly need to sleep (those free flow Champagnes can creep up on you!). There’s no point in wasting US$10 needlessly.

The stars then go through their alignment process.

And then you’re on. 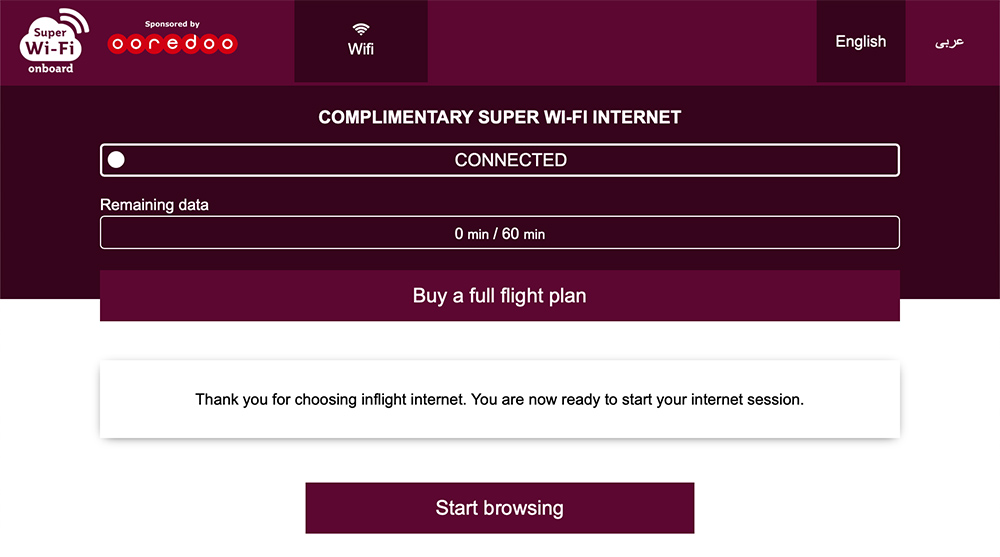 The only difference once your free hour is up and you wish to connect for the rest of the flight is that your credit card payment details are taken and verified before you are connected.

This actually took a couple of tries for me, but I’m happy to report only having my credit card charged once.

Just before reaching cruise altitude and while still using the complimentary first hour of Wi-Fi, I recorded a respectable 7.8 Mbps download speed. The long ping is expected, based on the nature of a satellite connection.

Once the free hour was up I paid by US$10 to stay online for the remainder of the flight. There might be something in what Qatar Airways says about the full US$10 unlimited package boasting a faster connection, particularly on the upload side, as the speed test now recorded 11 Mbps, with nearly 3 Mbps upload too. 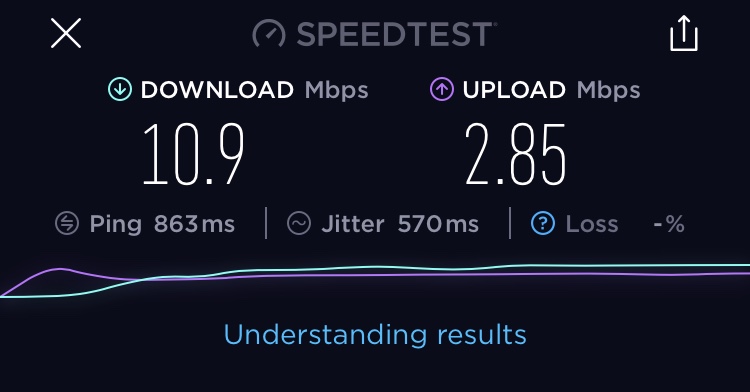 For those of you familiar with image uploading to shared online folders and web design sites like WordPress, you’ll know the upload speed can be just as critical as the download speed, so this improvement made the connection even more workable for me.

After dinner the speeds were a bit slower, with the next two tests recording only 5 Mbps and 2.5 Mbps. The connection remained useable even at these slower speeds, but was naturally a little more frustrating.

The best speeds were as we flew over the east side of the Bay of Bengal then down over Malaysia towards Singapore, where I picked up over 16 Mbps. 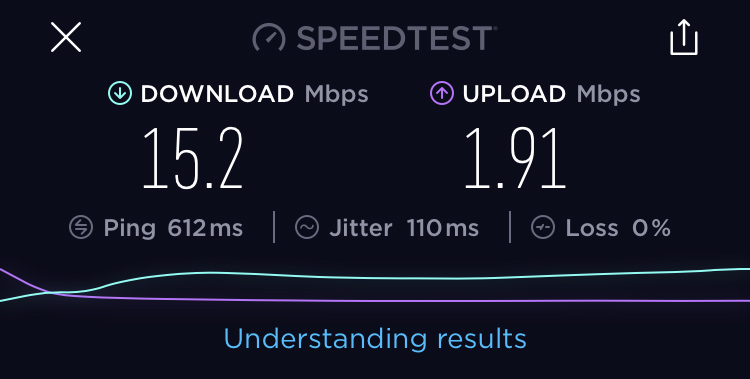 Overall across the five speed tests performed on the flight while connected to the full US$10 package, the average download speed was 10 Mbps with upload at 1.9 Mbps.

The Singapore Airlines new and refitted A380s, Boeing 787-10s and newer A350s also have the GX Aviation Wi-Fi system by Inmarsat, so theoretically ‘Super Wi-Fi’ isn’t exclusive to Qatar Airways, in terms of speed at least.

We’ve picked up some decent speeds during tests on these aircraft too, like:

Some other in-flight speed tests we’ve done in-flight include the following:

Many of these are quite respectable too, though none really seemed to hit the Qatar ‘Super Wi-Fi’ download speeds.

Some websites are blocked

As you might expect, you don’t necessarily have free rein of the internet using an onboard Wi-Fi system. Certain content-sensitive sites have access blocked.

I wasn’t deliberately trying to test this theory, but interestingly one of the sites Qatar Airways does not want you looking at using its in-flight internet is sqtalk.com! 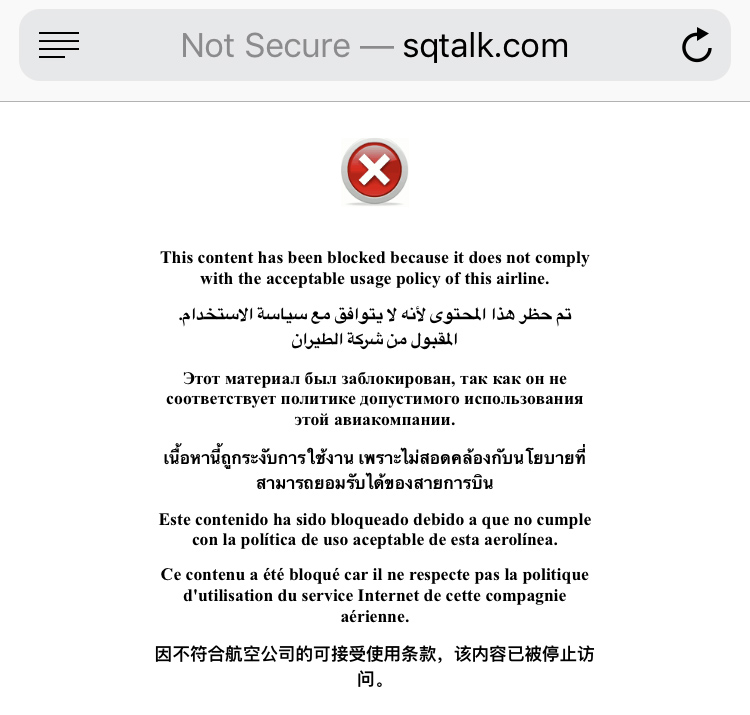 We’re happy to report though that if you need to book a Singapore Airlines flight or redemption during your Qatar Airways flight, access to the SIA site is not restricted.

Do note that Voice Over Internet (VOIP) calls are restricted, for the comfort of other passengers.

One issue you will face with the Wi-Fi if you’re flying Qatar Airways between Singapore and Doha is that not all countries permit an internet connection to be used when flying in their airspace. 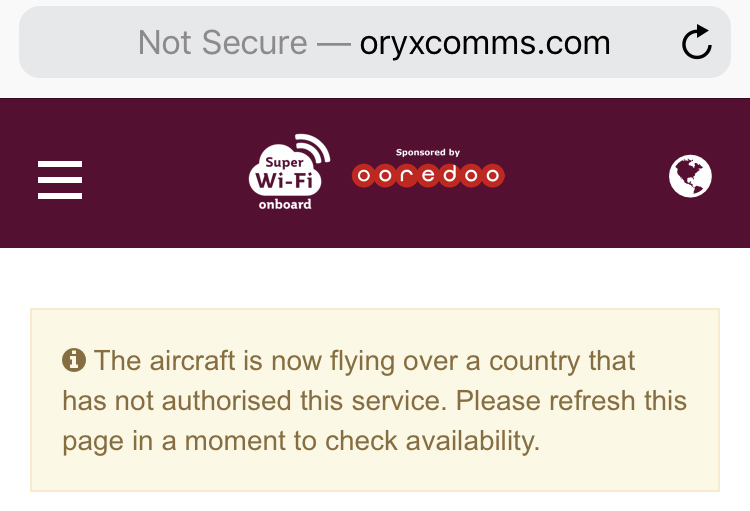 India is one of those (though that’s in the process of changing). Instead for those few hours of flight you’ll have to kick back with another Champagne and maybe watch a movie instead of surfing the web.