Skip to content
Most of Qatar Airways' Airbus A350-900s don't have the Qsuite. Our advice? Don't let that put you off. 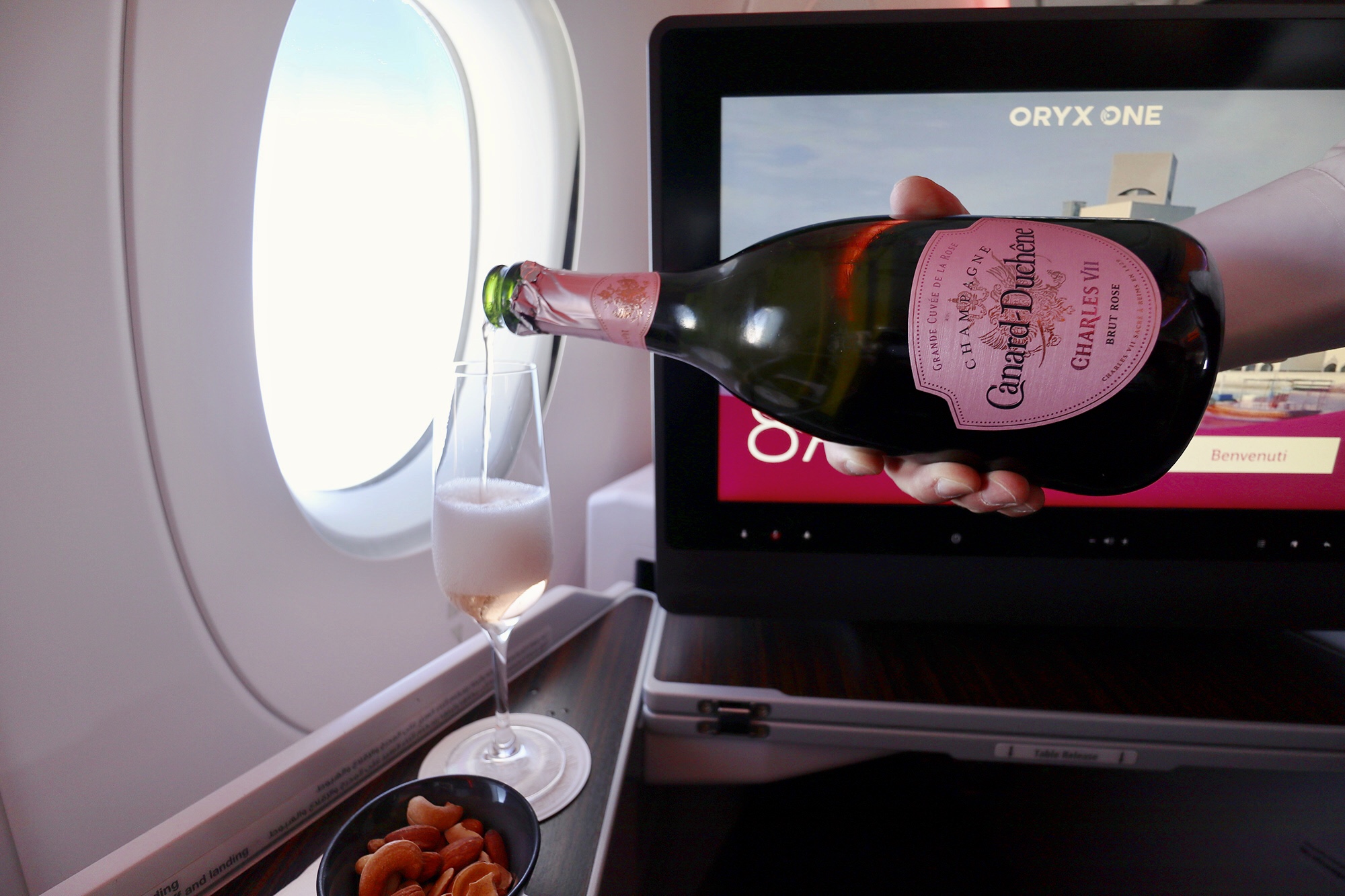 Mention Qatar Airways Business Class these days and you’ll probably only hear about one thing – the Qsuite. However, there are still a large number of the airline’s previous generation seats operating in this cabin, based on the Collins Aerospace ‘Super Diamond’ model.

We took a trip to find out what you can expect from the Qsuite’s ‘poor cousin’, still fitted to over half the airline’s Airbus A350s.

Note: Nearly 80% of the cash element payable on this redemption was down to the Qatar Airways fuel surcharge (£137.40, or S$233). Actual ‘taxes’ on this route are minimal.

Collins Aerospace is a major player in the aircraft seats market. While the company does a lot more than just cabin interiors (a market that’s grown for Collins since acquiring B/E Aerospace in 2017), it’s ‘Diamond’ and ‘Super Diamond’ Business Class seats are popular products.

Fun fact: Collins Aerospace also manufactures the Qsuite, though for obvious reasons Qatar Airways has made sure this is exclusive and therefore not available as an ‘off-the-shelf’ product for other airlines to buy.

In Qatar Airways fit on the A350, these seats boast 50″ pitch and a 22″ seat width, the latter not including the retractable armrest at the aisle side which provides additional width in both seat and bed mode if desired.

In full-flat mode the bed length is a generous 80″, though the foot end becomes a narrow ‘cubby hole’ as it extends under the console of the seat in front.

You’ll also find this seat installed in Business Class on the airline’s Airbus A380s and Boeing 787-8s, with a slightly shorter 78″ bed length on the latter type (so pick an A350 or A380 if you can on an overnight flight).

One aspect of this seat we find a little disappointing is privacy, with no side ‘wing’ at head level you do feel quite exposed to the aisle and other passengers compared with similar seats like Cathay Pacific’s Cirrus product (even the China Airlines version pictured above makes some effort to improve this).

The Qatar Airways A350-900s with Super Diamond Business Class have 36 of these seats installed. They are split across two cabin sections, a larger forward zone of six rows (rows 1 to 6) with 24 seats in total, then a small three-row cabin (rows 7 to 9) with 12 seats.

As the seat map shows, solo window seats are finished in Qatar’s maroon fabric, while the middle seat pairs are in grey.

We personally prefer the smaller three-row cabin at the back, which feels more intimate and has low foot traffic since the Business Class toilets are all located forward of this section.

Having tried the middle pair 10 days before on our flight from Doha to Athens, we decided to choose the window seats 7A and 8A for this flight.

Qatar’s check-in desks in Athens open three hours prior to departure, with no early check-in facility available, so don’t arrive at the airport too early as there’s not much to do in the landside area.

We discovered this having arrived four hours before departure on our flight from Mykonos, and had to kill time at a cafe in the check-in area while we waited for the desks to open.

Pro Tip: If you have a longer wait, the recently renovated Sofitel Athens Airport is directly opposite the terminal. Better bars and restaurants are available there to pass time between flights, including a comfortable lobby area. The hotel also offers day rates – call or email to book.

Qatar Airways uses the Swissport lounge at Athens airport, located opposite gate A13. A lounge invitation is provided along with your boarding pass at the check in desk.

It’s a fairly basic facility and nothing to be excited about, with no alternative oneworld options at the airport and a handful of Priority Pass lounges, which appear to be of a similar standard.

We would not recommend getting to the airport particularly early just to enjoy the lounge – an hour is really all you need in there. Shower facilities are not available.

Boarding was announced in the lounge around 45 minutes before departure time and we made our way to the gate. Timing was perfect – just as we arrived the Business Class cabin was being called.

We were offered a welcome drink and both opted for Champagne. As far as bubbly is concerned, Qatar Airways serves a Brut and a Rosé option both on the ground and in the air when flying Business Class.

A hot or cold towel is also offered. Athens Airport isn’t the best for air conditioning, including the rather warm experience in the airbridge while boarding, so we both went for a refreshing cold towel.

Also waiting at the seat are your blanket, pillow and an amenity kit, plus a water bottle and other literature to the side.

If you’ve flown this seat on Qatar’s Boeing 787 you’ll notice a few differences, not least that the A350 (and A380) version has a water bottle holder on the shelf to your side, which is missing on the Boeing 787.

Edit: Thanks to reader Terry for pointing out that some of the airline’s 787s do now have the water bottle holder on the side shelf, so perhaps these are being retrofitted.

You’ll find your headset in the extendible armrest at the aisle side.

Simply press the release button and the flap will lift, revealing this storage compartment with integrated light.

This is where your water bottle will be on boarding if you fly this seat on one of Qatar’s Boeing 787s.

You’ll always get an amenity kit when you fly First or Business Class with Qatar Airways, however pyjamas are only provided on long-haul flights which include some night flying.

Since this was a relatively short daytime flight between Athens and Doha, no pyjamas were loaded.

Pro Tip: Qatar Airways sometimes has pyjamas loaded on board from previous flights, even on routes which do not offer them. There is no harm in asking the crew if there are any spare sets.

The amenity kit is not the hard case BRICS one you’ll get on longer flights (there is a new soft case BRICS one doing the rounds too since late 2019), but instead is a fabric one from Indian luxury leather goods brand Nappa Dori.

The amenity kit is waiting at your seat when you board. If you’re on a Qatar Airways flight where pyjamas are offered, these will usually be distributed by the crew during boarding or before takeoff.

Inside you’ll find a pair of socks, eyeshades and ear plugs, plus the following toiletries from Italian wellness brand Monte Vibiano.

Three toilets serve the 36 seats in the Business Class cabin on this aircraft, an excellent seat-to-toilet ratio of 12:1, even with a full passenger load.

There’s one toilet at the very front of the cabin on the left, then one on either side behind seats 6A and 6K.

Toilets are a relatively standard size, with backlit mirror over the sink and a full-length mirror on the opposite wall to ensure you’ve changed into your pyjamas (if provided) correctly before re-emerging into the cabin!

Toiletries are by Dutch brand Rituals, and include hand soap, hand lotion and body mist.

Additional personal items you might consider to be ‘missing’ from the amenity kits can be found in the toilet – namely shaving and dental kits.

There is a padded changing bench which extends from the side wall to cover the toilet seat lid, plus a large raised baby changing table which lowers from the back wall at sink surface height.