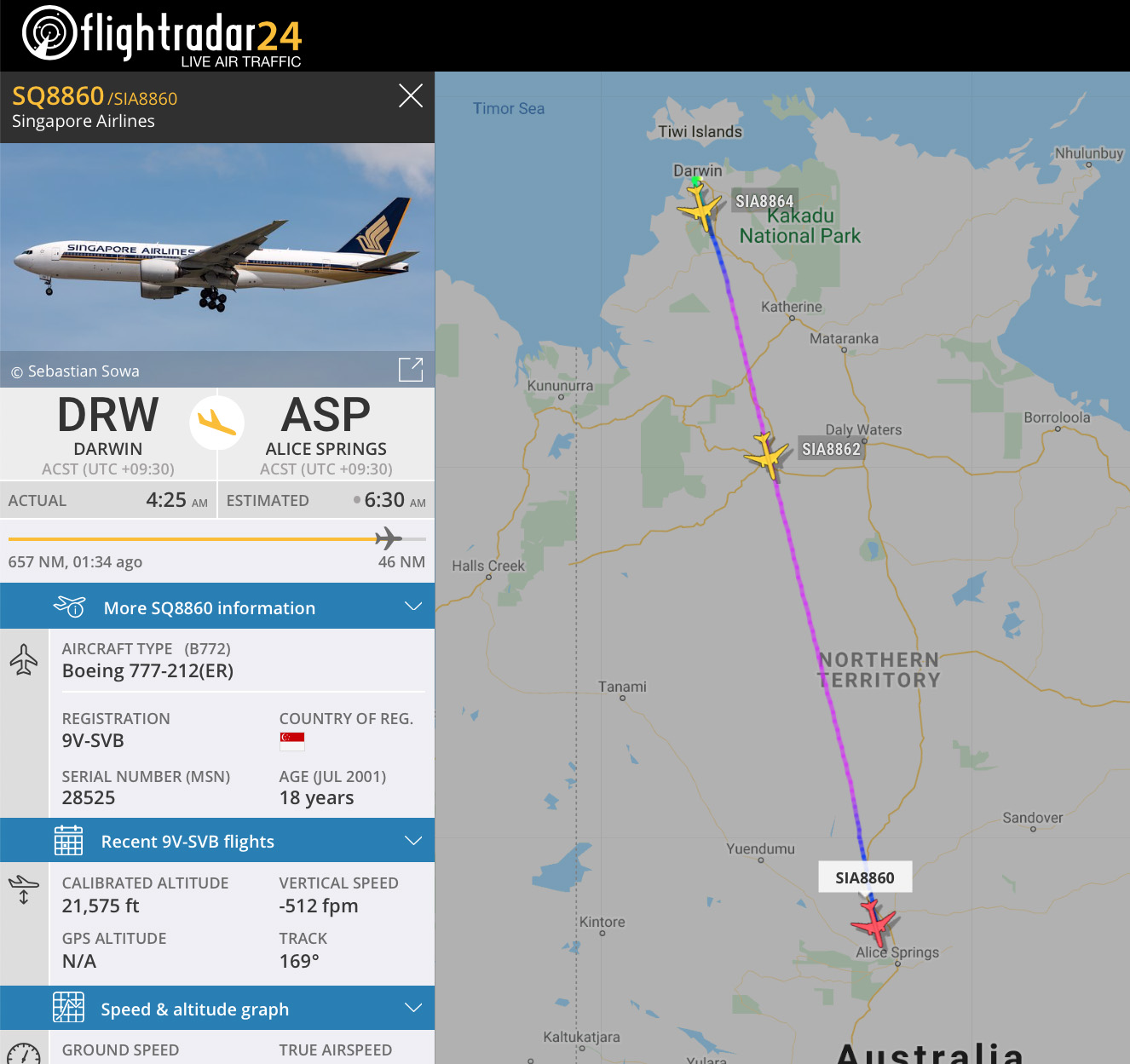 Singapore Airlines began sending some of its aircraft to a long-term storage facility in Australia last night, as the effects of the global coronavirus pandemic look set to dent travel demand for many months to come.

In total three Boeing 777-200ERs and two Scoot Airbus A320s made the journey to Alice Springs, home of Asia Pacific Aircraft Storage, the only purpose-built aircraft storage facility outside the USA.

You may recall that all six of SilkAir’s Boeing 737 MAX 8 aircraft were flown there last year, where the dry desert climate is far better suited to aircraft storage than the humid environment in Singapore.

In total 11 SIA Group aircraft are now resident in Alice Springs, and with the continued uncertainty over how long it will be before the airlines can return to anything resembling 100% operation, we expect more may follow in the weeks ahead.

Here are the five aircraft which flew to Alice Springs via Darwin last night, including details of their most recent passenger flight.

Shortly after midnight on 5th April 2020, all five aircraft had departed on their way to Alice Springs via Darwin.

In the early hours of this morning all three Singapore Airlines aircraft were en-route to Alice Springs.

The two Scoot A320s followed later with all five aircraft having landed by around 8.30am local time.

Even before the coronavirus situation escalated, Singapore Airlines was already well advanced in its plans to phase out the Boeing 777-200 and -200ER models, progressively replacing them with a mixture of brand new Airbus A350s and Boeing 787-10s.

Recently there were only three Boeing 777-200ERs (the three that have been relocated) and a single Boeing 777-200 still in active service with the airline (9V-SQN, which hasn’t flown since 20th March).

With scores of more modern, fuel efficient aircraft at SIA’s disposal, it would seem unlikely that these older aircraft will be returned to service with the airline.

This would make the older Airbus A380s the only type with the super-wide 2006 long-haul Business Class seats still in service.

When SilkAir relocated its Boeing 737 MAX aircraft to Alice Springs they flew directly from Changi, however all five of these aircraft made an en-route stop in Darwin last night.

We understand this was to allow the crew to clear Australian immigration (currently unavailable in Alice Springs).

Interestingly this morning’s SQ212 Sydney to Singapore flight was re-routed via Alice Springs, presumably to pick up the five sets of pilots, fly them to Darwin to complete exit immigration formalities, and continue to Singapore.

It’s certainly a more interesting routing than usual for that flight, though do note that SQ212 is operating as a belly hold cargo-only service with no paying passengers on board for the multi-stop trip. 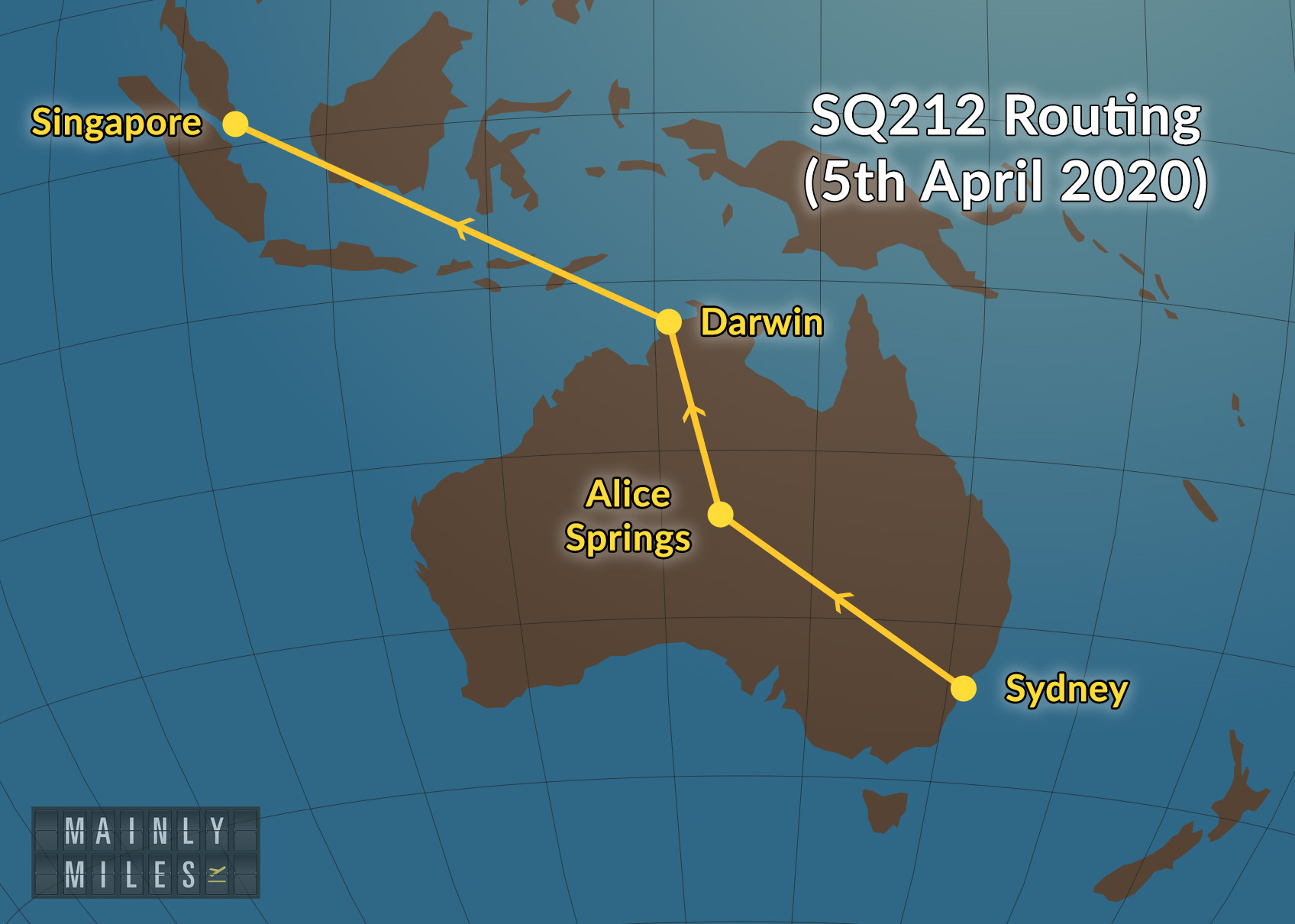 In better news for the fleet, SIA’s newest aircraft, Boeing 787-10 9V-SCP, began test flights in Charleston, USA, wearing “1000th 787 Dreamliner” titles near the nose. It’s hard to believe there are now 1,000 Boeing 787s in the world, especially in the current climate.

Gary Eaton put some shots of the new bird on Instagram, which you can click through below.