Skip to content
Older 777s in the Singapore Airlines fleet may be a dying breed, but their 2006 Business Class seats are not - with over 1,000 of them still in service. We took a trip to Hong Kong and back to try them out. 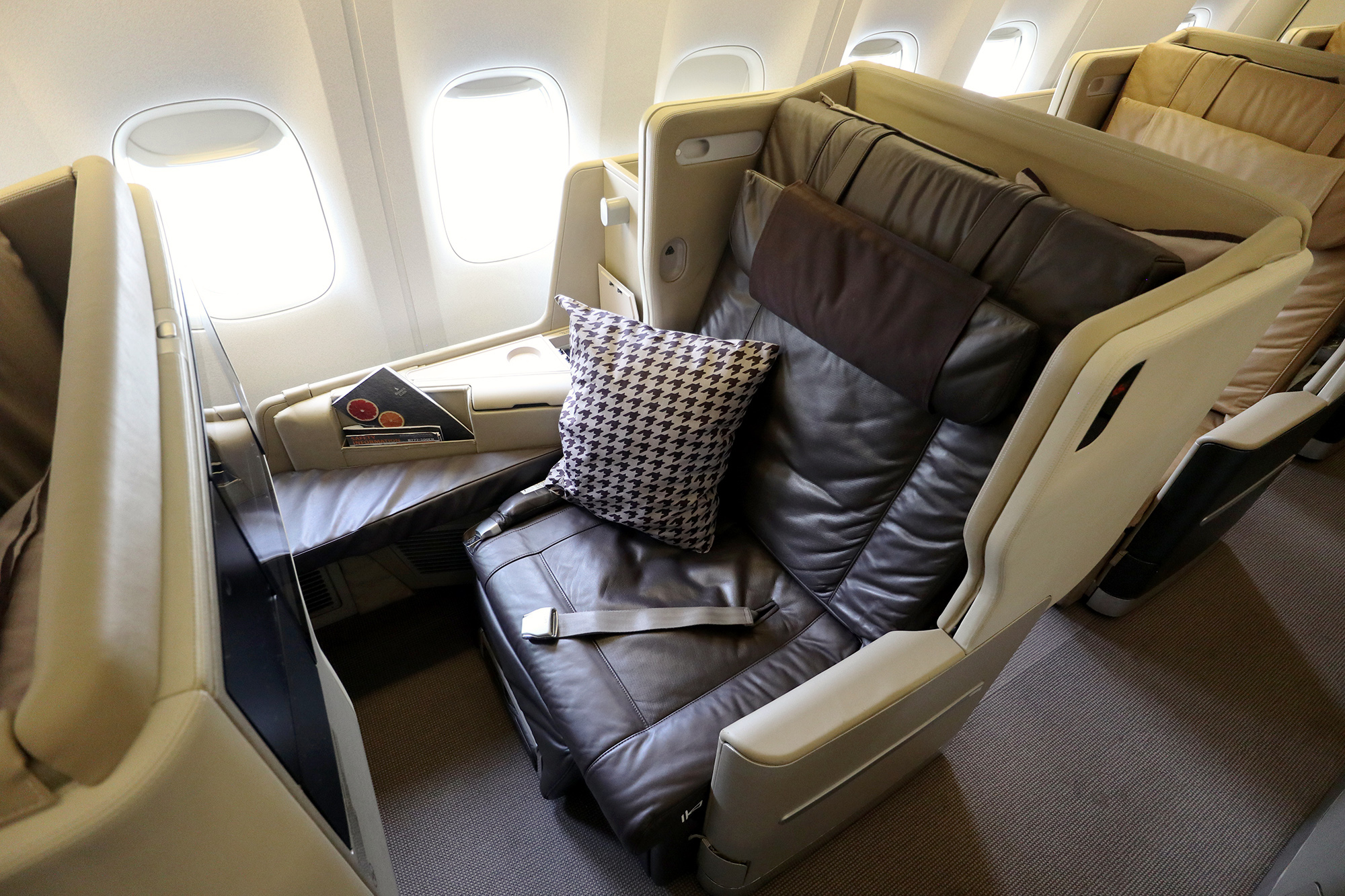 Singapore Airlines operated close to 50 Boeing 777-200s almost a decade ago, but today the numbers have significantly dwindled to just eight in the active fleet at the time of writing; three 777-200s and four 777-200ERs.

Those four extended range versions feature the airline’s oldest Business Class seat currently in service, the huge 30″-wide model introduced in 2006 and also still widely used on the airline’s older Airbus A380 aircraft, where it boasts a 34″ width.

We took a trip to Hong Kong and back to try them out.

This review is a combination of our experiences on both these flights, which is why you’ll notice some photos taken at night (SIN-HKG) and others during the day (HKG-SIN).

Over 1,000 of the 2006 Business Class seats are still in service with Singapore Airlines at the time of writing (December 2019). At 30-34 inches armrest-to-armrest they are commonly known as some of the widest airline seats in the sky, and yes that includes most First Class offerings.

The seats are being gradually phased out by SIA as older aircraft leave the fleet, in the case of 777-200ERs, or (very slowly!) retrofitted with newer versions, in the case of the A380s.

That said, it will be a few more years before they are gone, especially with the slow pace of A380 refits.

We originally chose a middle seat pair at row 15, however four days prior to departure at the “minus 96-hour” point we logged on and managed to secure the bulkhead row seats 11D/F, previously reserved for selection by PPS Club members.

You can see which seats Singapore Airlines blocks for advance selection and whether you can usually get your hands on them at either 96 hours or 48 hours before departure by checking our comprehensive guide here.

We chose the 11D/F pair as there’s a little more room in the bulkhead row.

We checked in around 4 hours before departure at the Jewel Early Check-in Lounge, as we then wanted to review the Changi Lounge directly opposite using our Priority Pass. You can read that review here.

We were only popping to Hong Kong for the weekend so with hand luggage only the self-service check in machines are a quick and efficient way to get your boarding card.

The only downside? It’s a flimsy piece of paper without the smart dark blue Business Class banner along the top!

After visiting the Changi Lounge we walked across to T3 around 2 hours prior to departure time, cleared immigration and headed to the SilverKris Business Class lounge.

There was nothing really new to report here, except that Tattinger was being served in the SilverKris Business lounge that evening, rather than the usual Charles Heidsieck. Note: Even on board now, Singapore Airlines has predominantly switched to Laurent-Perrier.

As with most evenings it started off relatively quiet in the SKL with plenty of seats available, but soon became much busier. Nothing quite like the 9pm to midnight levels though, when it becomes extremely busy most nights.

We’re definitely looking forward to the long overdue revamp of this lounge, which will hopefully be opening in 2020.

The biggest enhancements will be a full service manned bar, plus some of the airline’s ‘productivity pods’ for a more private experience. We’ll be sure to get a full review online once the new facility is up and running.

Boarding commenced at 7.30pm and we got on first to snap a few photos of the Business Class cabin before it got too busy.

As we took photos the crew even apologised that the Business Class seats on this aircraft were “so old”, a reflection of how common the latest models are rolling out even on shorter routes like this.

What surprised us was the quality of the seats. Despite their age, the leather and many other fittings had obviously been recently replaced. In many ways the seats looked nearly new.

As we took our seats in the middle pair at 11D and 11F, the crew addressed us by name and offered a welcome drink option of water, juice or Champagne.

The 2006 Business Class seat features a handy little fold-out drinks shelf alongside the TV screen at the aisle side of each seat. In the past your welcome drink was always served here, but interestingly on the last few flights we have taken with this product fitted – the crew no longer use it.

Perhaps too many drinks were being spilled when kept here, as passengers get in and out of their seat when they realise some of the belongings they need are still in the overhead locker.

Nonetheless you can still fold it out and use it if you prefer. We opted for a glass of Champagne, still the Charles Heidsieck when our flight was operating but increasingly (and eventually completely) to be replaced by the less expensive Laurent-Perrier Brut.

The Business Class menu for the flight was waiting at our seats. We’ll take a look at this in more detail later in the review. In fact on both our flights we opted for a pre-ordered ‘Book The Cook’ option.

There is also the usual array of newspapers and magazines offered, which were also available on the airbridge as we boarded.

On both flights our ‘Book The Book’ order was verified on the ground and the crew took our after takeoff drinks order.

As Singapore Airlines Business Class regulars will know, you’ll have to be flying in First Class to get an amenity kit or pair of pyjamas with this airline, and even then you’ll usually have to be flying on a longer route than this (6-7 hours+).

There are rumours however, confirmed by a corporate tender request and later by an IFM on one of our recent A380 flights, of a Business Class sleep suit coming in 2020. It’s unlikely though that these would be offered on short-haul flights like this one, even if they do materialise.

The SIA Boeing 777-200ER has two toilets located at the back of the Business Class cabin, behind row 18.

Even on a full flight the passenger to toilet ratio is generous at 13:1, so on this evening service with a light load there was never any wait to use one of the toilets.

Despite the lack of amenity kits, some basic toiletries are available in the toilets including Penhaligon’s products.

There is no Wi-Fi installed on the Singapore Airlines 777-200 or 777-200ER aircraft, so you’ll be out of touch during your flight.

If you’re flying this 2006 Business Class seat type on an A380 however, Wi-Fi is available. Those aircraft (A380 Versions 1 and 2) have an older and slower system installed, with 30MB free Wi-Fi allowance per flight for Business Class customers.

If you step on an A380 Version 3, with the new 2017 Business Class seats, that’s either a new or retrofitted aircraft with the latest Wi-Fi equipment and a 100MB free allowance per flight in Business Class.

The 2006 Business Class seats have the older 15.4″ standard definition IFE screens, so you won’t get cutting edge crisp movies or the most extensive selection when flying in this cabin.

Nevertheless noise cancelling headphones are provided, which work well and have their own hook at the seat side for easy stowage when not in use.

You’ll still also find the usual moving map flight information display and a range of the latest movies (we counted 327 on our flight!), games and TV shows, despite the selection not being up to the more extensive range found on the latest systems.

There is no touchscreen function, instead the system is controlled be a handheld remote which you’ll find in the armrest.

It looks a little antiquated, but it does the job!

The seat controls are located in the armrest.

These are the older style fixed buttons, controlling the ‘Do Not Disturb’ function, cabin attendant call and overhead reading light.

Two rocker switches allow you to recline the seat into a more comfortable position, or extend the leg support.

We’re all becoming more used to the latest ‘haptic touch’ seat controls on newer Singapore Airlines aircraft in Business Class, but there’s nothing wrong with these old switches – provided they work. Responsiveness doesn’t seem to be a strong point.

The aircraft we flew on to Hong Kong was showing its age in this respect, with the seat recline button on my control panel activating the overhead reading light. With a firm push and hold, it eventually triggered the correct function, with a little ‘strobe lighting’ effect going on overhead!

A spacious table extends from the armrest furthest from the aisle, and provides a good sturdy working or dining surface.

Lifting the flap reveals the table release mechanism, which operates on a ‘spring-push’ basis.

Once the table is extended, you can also adjust the height by an inch or so to better suit your seating position for a more comfortable dining or working experience.