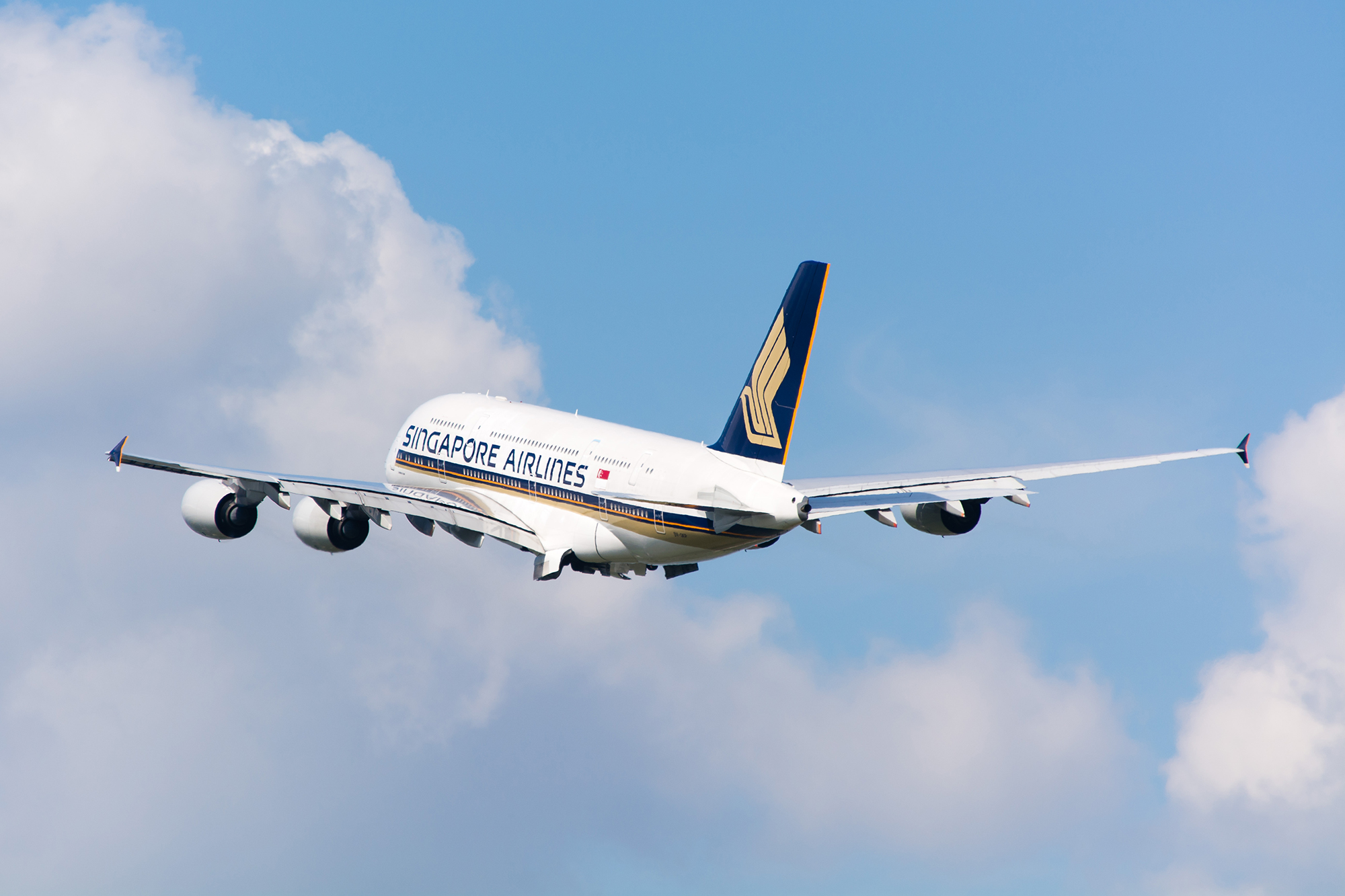 With 11 SIA Group aircraft now parked in long-term storage at Alice Springs Airport, and no realistic prospect of a return to normal airline traffic levels during the coming months, another batch of aircraft are making their way to the Aussie desert this weekend including four of the airline’s biggest jets – the Airbus A380s.

ABC Australia picked up the news yesterday that six SIA group aircraft are winging their way south this Saturday night, which will then make up a total of 17 aircraft in long-term storage across the three group airlines by the end of the week.

Aircraft moved to storage facilities like the one in Alice Springs, and perhaps more familiar ones in the Arizona and California deserts, are typically out of action for a minimum of three to four months, usually longer, so this 20% cut in Singapore Airlines’ operational A380 fleet is telling.

With global air traffic likely suppressed for at least the remainder of 2020, a maximum operational fleet of 15 A380s for Singapore Airlines already seems like more than enough.

The first relocated aircraft, TR7003 believed to be a Scoot A320, already shows in the schedules as departing from Changi at 11.45pm on Saturday night (25th April 2020), and should land into Alice Springs at around 8am local time on Sunday morning. 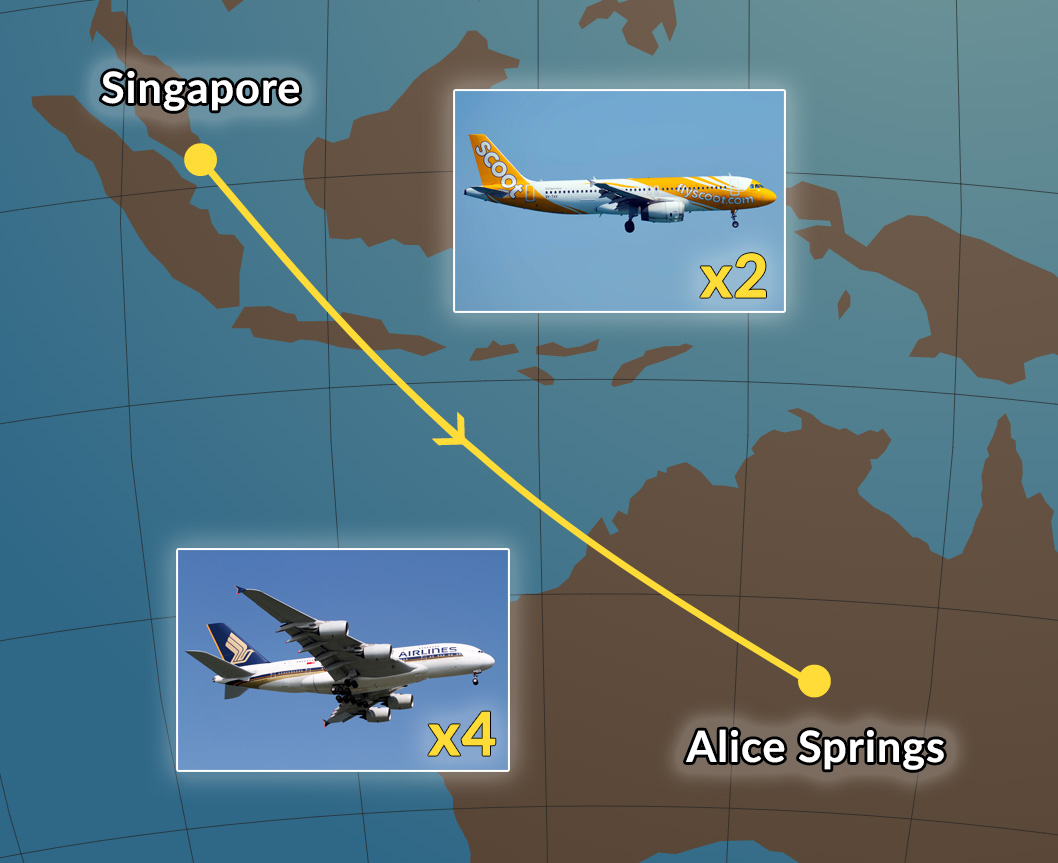 A procession of five further aircraft that night should include one additional Scoot A320 (TR7001) and the four Singapore Airlines A380s themselves, though the exact order is still unclear and might change as the Singapore Airlines departures have not het been loaded.

The aircraft will depart as follows:

It’s thought to be the first time an Airbus A380 will ever have landed in Alice Springs.

The location benefits from a dry desert climate, essential for preserving aircraft in long-term storage, which don’t fare well if they are left continuously unused in humid environments like Singapore.

Corrosion is the main concern, though hundreds of maintenance tasks are performed to protect a range of aircraft systems when an aircraft goes in to long-term storage and periodic checks and testing are then carried out on each aircraft.

Three weeks ago Singapore Airlines and Scoot began shifting some aircraft to the facility.

A trio of Boeing 777-200ERs and pair of Scoot Airbus A320s took the same path earlier in April as SilkAir’s six-strong fleet of beleaguered Boeing 737 MAX 8 aircraft, which have now resided in Alice Springs for the last six months.

The most interesting aspect of these new aircraft moves will be which of the airline’s Airbus A380s are heading into storage. At this stage that information is unfortunately not available.

Here’s how the Singapore Airlines 19-strong fleet of Airbus A380s is distributed across three cabin configurations.

The airline will almost certainly not be flying any of its latest Version 3 aircraft, which are either new or newly refitted with the latest 2017 cabin products, nor do we expect 9V-SKN, which is now likely in the final stages of being refitted as a Version 3 aircraft, to be one of the four either.

Update 26 Apr: Singapore Airlines did in fact fly four of its latest Version 3 A380 aircraft to the storage facility, as we outlined here.

That leaves all six of the older 441-capacity Version 1 aircraft and five of the 379-seater Version 2 aircraft as potential contenders.

We should find out on Saturday night as these aircraft depart which four have been selected.

Singapore Airlines already returned its first five leased Airbus A380s, 9V-SKA to -SKE, between mid-2017 and early 2018. The first two of those have now been scrapped, with one aircraft operating for HiFly and the remaining two in storage.

The airline owns 15 of its current fleet of 19 A380s, with four on operating leases. These aircraft were originally owned by SIA, however the four leases came about through a series of ‘sale and leaseback’ deals performed by the airline to raise additional capital, which occurred in:

That means at least one of the leased aircraft (the one sold and leased back in financial year 2010/11) is a Version 1 A380 (SKF-SKK), while the remaining three could be Version 1 or Version 2 aircraft.

We understand the leased aircraft are 9V-SKK (v1) plus three v2 aircraft, though this is not confirmed.

If the four leased aircraft remain in Singapore, that could spell an even further reduction to the A380 fleet, since we expect their leases probably won’t be renewed, with the airline more likely handing them across to lessors on expiry.

In that scenario, assuming four ‘other’ A380s remain in Alice Springs for the foreseeable future, this could reduce the fleet to as few as 11 aircraft in the medium term, potentially leaving only three aircraft to receive the cabin refits after SKN is completed.

With aviation demand unlikely to recover fully for years to come, if some forecasts are to be believed, this is not a far-fetched scenario at all. The A380s poor operating economics have already caused it to fall out of favour with many airlines in recent years.

Singapore Airlines is not the first

The woes of the Airbus A380 are well documented in an age of efficient twin-jets like the Boeing 787 and Airbus A350, which have proven enormously popular over the last few years for their long range, low fuel burn and reduced maintenance requirements.

The Airbus A380, already out of production after new orders dried up (except those who were forced to take them, that is) was already looking like a bit of a dinosaur. COVID-19 has sadly accelerated the inevitable.

Qantas CEO Alan Joyce famously remarked in 2018 that he would have to be “drunk” to order more of the type. Later that year former Qantas chief economist Dr. Tony Weber said “You can fly two Boeing 787s between Sydney and Los Angeles with the same fuel consumption as the A380.”

Two weeks ago Lufthansa announced that it would not only be parking up six of its 14 Airbus A380s, but that they would never be used again as the airline foresees a long COVID-19 recovery.

British Airways has sent several of its A380s to a parking site in France, while Korean Air, Qantas, Air France, Etihad and Emirates have all suspended A380 services.

In a time of low (or no) demand, one thing you don’t need is your biggest aircraft type.

Another issue is the A380’s poor cargo hold capacity. Singapore Airlines has been mounting several cargo-only services this month using its passenger aircraft, but (perhaps surprisingly) the giant A380 has a relatively small underfloor cargo hold, about the same size as the airline’s A350-900s.

As such SIA has been concentrating its cargo operations using the passenger fleet on the far more capable Boeing 777-300ER, Boeing 787-10 and Airbus A350, the latter boasting half the fuel burn of an A380 for a near identical cargo volume.

Here’s a summary of the 17 Singapore Airlines Group aircraft set to be in long-term storage in Alice Springs by Sunday this week (26th April 2020).

We have a full list of which other Singapore Airlines aircraft remain active or in short-term storage at Changi Airport as of 18th April 2020 in our regular monthly fleet update here, which showed that 61 aircraft are effectively in storage mode.

With all Singapore Airlines Boeing 777-200ERs now out of action, as was largely expected this year anyway, the 2006 Business Class seat was set to become the preserve of the 12 older A380 Version 1 and Version 2 aircraft.

With four of those aircraft inevitably on their way to the desert this weekend, plus a fifth almost certainly in the final stages of upgrading works to Version 3 status (9V-SKN), i