Skip to content
One of SIA's much-loved Business Class seats has bowed out after 13 years of service. Here's our send-off to a product with an interesting history.

We continue our ‘farewell’ series of four Singapore Airlines Business Class and First Class seats with one that will likely rank among our readers as a revolutionary product, if not now then certainly when it was launched, the 2006 long-haul Business Class model.

As its name suggests, the product entered service in 2006, but only just! The inaugural flight with the new seats, SQ334 from Singapore to Paris, departed Changi on 5th December 2006. It was operated by the airline’s first Boeing 777-300ER (9V-SWA), which came delivered fresh from the factory with new cabin products in all three cabins.

Over 13 years later, the era of the 2006 Business Class seat in SIA came to an (unintentionally premature) close, when the final passenger flight with this cabin, flown by Airbus A380 9V-SKL as SQ321 from London Heathrow to Singapore, touched down into Changi on 28th March 2020 at 6.54pm.

While the seats remain installed on three of the carrier’s Airbus A380s due to return to service after COVID-19, these will all be refitted with the latest cabin products before rejoining the operating fleet.

It was launched on the “wrong” aircraft

Singapore Airlines designed the new 2006 Business Class seat (and its counterpart Suites product) to be launched on the Airbus A380, which was set to be introduced into service in April 2006. This was a significant milestone for the airline, since it was the launch customer for the aircraft type.

Production delays pushed the first delivery to October and then December 2006.

In the end, another 10-month holdup resulted in SIA taking its first superjumbo in October 2007, 18 months later than planned.

That meant the new seats had to be introduced on the Boeing 777-300ER instead, between Singapore and Paris in December 2006. The 2006 Business Class product was first revealed to the media at an event on 17th October 2006, alongside the 2006 First Class seat.

By March 2007 the seat had been rolled out to several routes, as additional Boeing 777-300ER deliveries took place:

It was certainly all about width in Business Class, with these huge seats offering over 25% more lateral space than those being replaced, but before we study the seat in detail let’s take a look at who made it (“by hook or by crook”, as it turned out!).

This seat was manufactured by Koito Industries of Japan, as an exclusive design for Singapore Airlines.

The disgraced company no longer manufactures aircraft seats, since admitting to falsifying safety test results in 2010, a scandal that delayed new deliveries and retrofit work on many Singapore Airlines aircraft, including Airbus A380s and Boeing 777s.

More on the seat scandal later in the article!

This revolutionary product was sometimes referred to as the Koito ‘Diamond’ seat (while the 2006 First Class was the ‘Diamond Plus’ seat), though Singapore Airlines never specifically named either one.

At the time, this was both the largest seat and the largest bed offered worldwide in Business Class.

Direct aisle access and seat width were both significant selling points, but SIA also lauded the seat’s power supply and IFE system in its marketing.

Our new Business Class seat, the widest in its class, invites you to be re-acquainted with the joys of relaxing on your favourite sofa. The premium seat unfolds to reveal the largest ever full-flat bed; offering you all the room you need.

In June 2013 over 2,750 of these seats were installed on Singapore Airlines aircraft, close to 60% of the 4,600 Business Class seats fitted fleet-wide at that time.

For some, it was too wide

The enormous width of the seat was such that it could actually be uncomfortable to relax in for some passengers, as it was almost impossible to have two easily reachable armrests.

Singapore Airlines started providing bolster cushions at each seat to assist with this, though the practice eventually ceased.

The seat had a great little shelf for your welcome drink, though we noticed in recent years the crew stopped using it, perhaps because too many were getting spilled as passengers got in and out of their seats or stowed their hand luggage in the overhead locker during boarding.

On the Boeing 777, each seat also had a useful storage shelf at the window side (or between the middle seat pairs), ideal for portable devices like laptops and tablets that you needed to keep within reach during the flight.

For those sitting next to a stranger in the middle seats, there was an extendable privacy divider installed.

While these are no match for the much larger dividers fitted in Business Class on more recent SIA aircraft, they still improved privacy to a good degree.

Bulkhead seats were always ones to go for if you wanted to avoid the small cubby hole for your feet while sleeping once the 2006 J seat was in bed mode.

The lack of a seat in front meant a full-width bench replaced the small space, providing a much more generous sleeping surface.

On most aircraft with the 2006 J seats installed this meant picking any seat in row 11, though there were additional options especially on the Airbus A380.

The bed ‘flipped over’

One potential downside of the 2006 Business Class seat was that the mattress was on the reverse of the seat itself, requiring you to flip the seat back over to convert it to bed mode.

Of course you could always ask the cabin crew to do this for you and they would happily oblige, however it meant you couldn’t easily switch between seat mode and bed mode like you can on the newer 2017 Business Class seats.

That said, the 2013 Business Class still requires you to flip the seat over when turning it into a bed.

The A380 seats were bigger

You’d be forgiven for thinking that there was only one version of the 2006 Business Class seat fitted on specific aircraft in the Singapore Airlines fleet.

In fact not all Singapore Airlines 2006 Business Class seats were created equal.

The ones on the Airbus A380 were some four inches wider than those on the Boeing 777s (34″ vs 30″), taking advantage of extra space by removing the storage shelves alongside the IFE screen on the inside sections of each seat.

The triangular fixed side at the window side (or between the seats in the middle pairs) along the seat pan was also removed on the A380, ‘squaring up’ the section.

The Airbus A340-500s had similar seats to the A380s in design, but were also scaled back to 30 inches of width in order to fit in the 52-cm narrower cabin, compared to the A380 upper deck.

In effect, there were actually three versions of the 2006 Business Class seat in service at one point.

These were very useful for storing your own shoes or toiletries, etc. and keeping them in easy reach throughout the flight even when the seat was in bed mode.

It more than made up for the missing storage shelf found on the Boeing 777s.

Here are the key stats for the 2006 Business Class seat, shown alongside its primary replacement – the 2013 Business Class manufactured by Japan’s JAMCO, which was first introduced on 9th July 2013.

The seat was replaced on the Airbus A380s, however, by the newer 2017 Business Class model, which first launched on 18th December 2017 and is also manufactured by JAMCO. Its vital stats are shown alongside the 2006 seat below.

What did it replace?

If that sounds archaic for Business Class, a 2-3-2 layout was even used on the main deck of the Boeing 747s!

Notice how Singapore Airlines didn’t name its seat products after the SpaceBed, which finally left service in December 2017, as the airline moved into CEO Chew Choon Seng’s era.

He was said not to favour the policy and also oversaw the rebranding of Raffles Class into the more internationally-recognised Business Class, plus the abolition of aircraft type names like MEGATOP, Jubilee and LeaderShip.

Here is a list of the four aircraft types in the Singapore Airlines fleet that had the 2006 Business Class seats installed over the years, with the very first inaugural and final services highlighted.

The first aircraft type in the fleet to get the new 2006 J seats was the Boeing 777-300ERs, brand new at the time, which featured 42 seats across a small two-row cabin just behind First Class, plus a larger nine-row section. 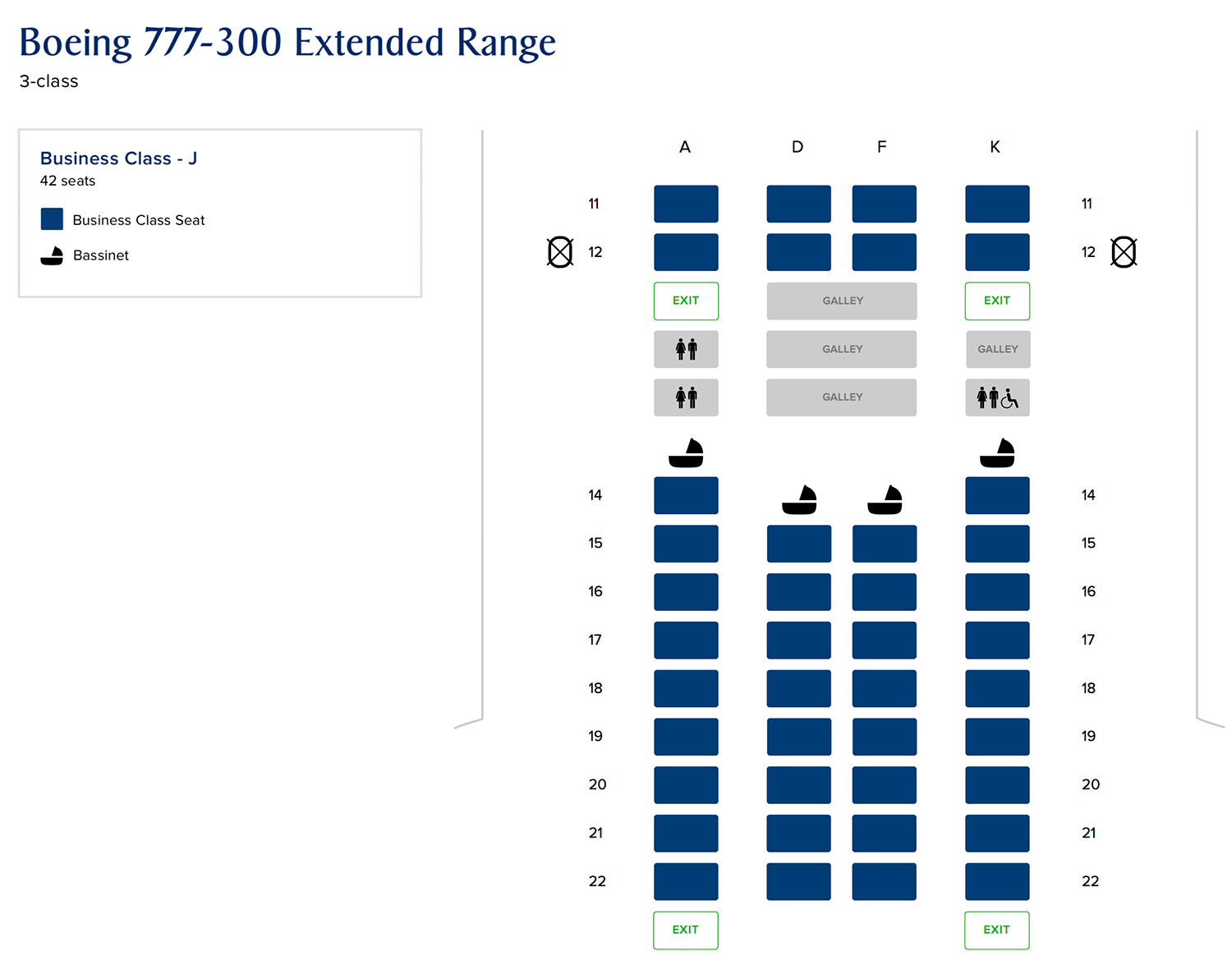 The two-row ‘mini-cabin’ was popular with frequent flyers for its quieter and more intimate atmosphere, leading people to favour it even in Row 12, which was missing a window.

The seats then made their way onto another brand new type – the airline’s Airbus A380, which was also the first in the world when it entered service between Singapore and Sydney in October 2007. 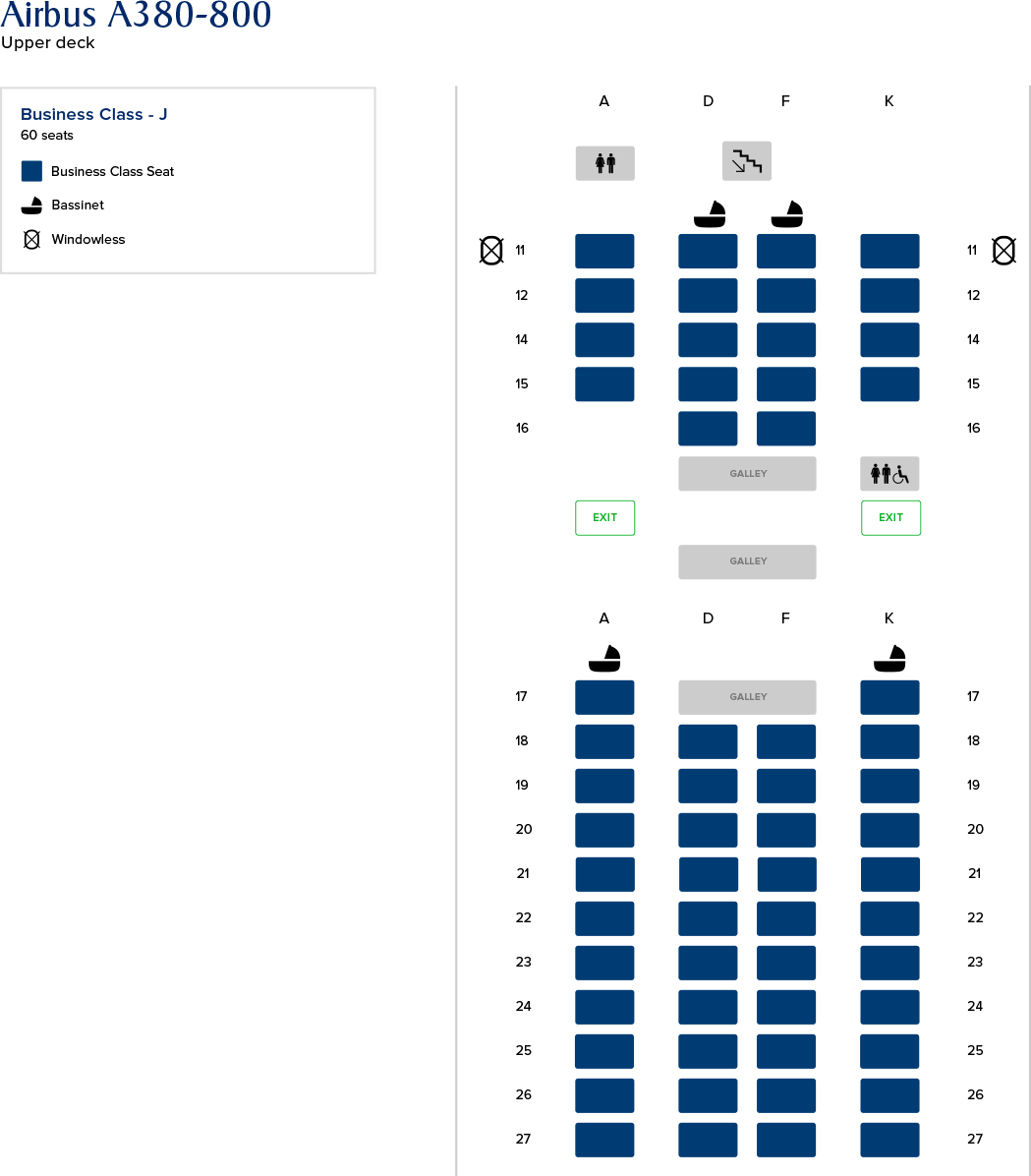 A380 flights from Singapore to London were added on 18th March 2008, allowing customers to fly the popular ‘kangaroo route’ through Singapore in the world’s widest Business Class seat.

Later versions of the superjumbos had an all-Business Class upper deck with 86 seats in total, including a peculiar single row behind the rear door pair. 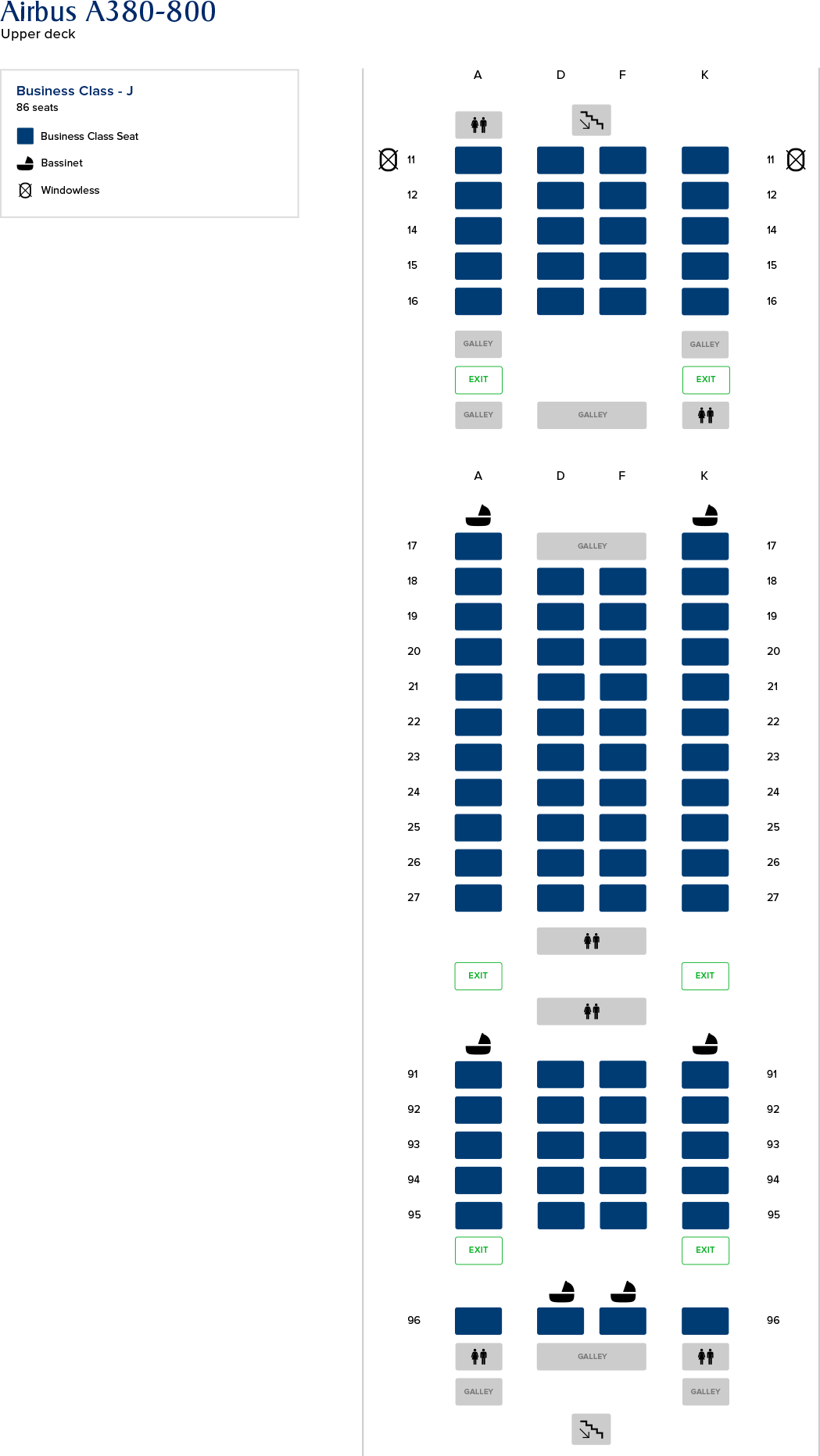 Bassinet positions were also moved out of the forward mini-cabin, which also had a couple more seats installed due to a toilet and galley reconfiguration.

By 2008 it was time to refit the five Airbus A340-500s operating non-stop flights between Singapore and both Newark and Los Angeles with the new seats, replacing the SpaceBeds on SIA’s longest non-stop flights.

The airline also took the opportunity to reconfigure these aircraft at the same time, into an all Business Class arrangement with 100 seats.

Finally in 2013, once the Koito seat saga had been ‘resolved’ to a certain extent, SIA began fitting the 2006 J seats to its Boeing 777-200ER aircraft, again replacing the SpaceBeds.