Singapore Airlines has kicked off 2021 by reintroducing more aircraft into service, increasing its operating fleet to 74 out of the 106 it intends to bring back into operation after COVID-19. Meanwhile another Airbus A330 has made a routine departure for a new life, and Boeing 787-10s have been setting endurance records thanks to a tennis tournament ‘down under’.

With the efficient Airbus A350s and Boeing 787s now almost permanently in use and probably a little stretched, Boeing 777-300ERs are also making a comeback on passenger flights, though their First Class cabins remain off-limits for now.

Looking forward we should also see the introduction of several ex-SilkAir Boeing 737-800s to the Singapore Airlines fleet in the coming months, plus the return of Boeing 737 MAX 8s into service, while some of the airline’s brand new Airbus A350 and Boeing 787-10 aircraft are stirring, suggesting upcoming wide-body aircraft deliveries.

The official registered aircraft data in combination with recent retirement announcements and analysis of actual flight movements over the last few weeks allows us to determine the actual ‘in service’ fleet (available to the airline) of 106 planes at 24th January 2021, 74 of which are currently active.

Almost all Airbus A350s and Boeing 787-10s remain in consistent use, while the deployment of Boeing 777-300ERs is still at around a third of that fleet, with the airline actively using a total of 74 aircraft in January 2021, it’s highest total in nine months.

Here’s a graphical look at the active vs. stored fleet, including the average daily utilisation per active aircraft based on the 7-day period between 16th January and 22nd January 2021. 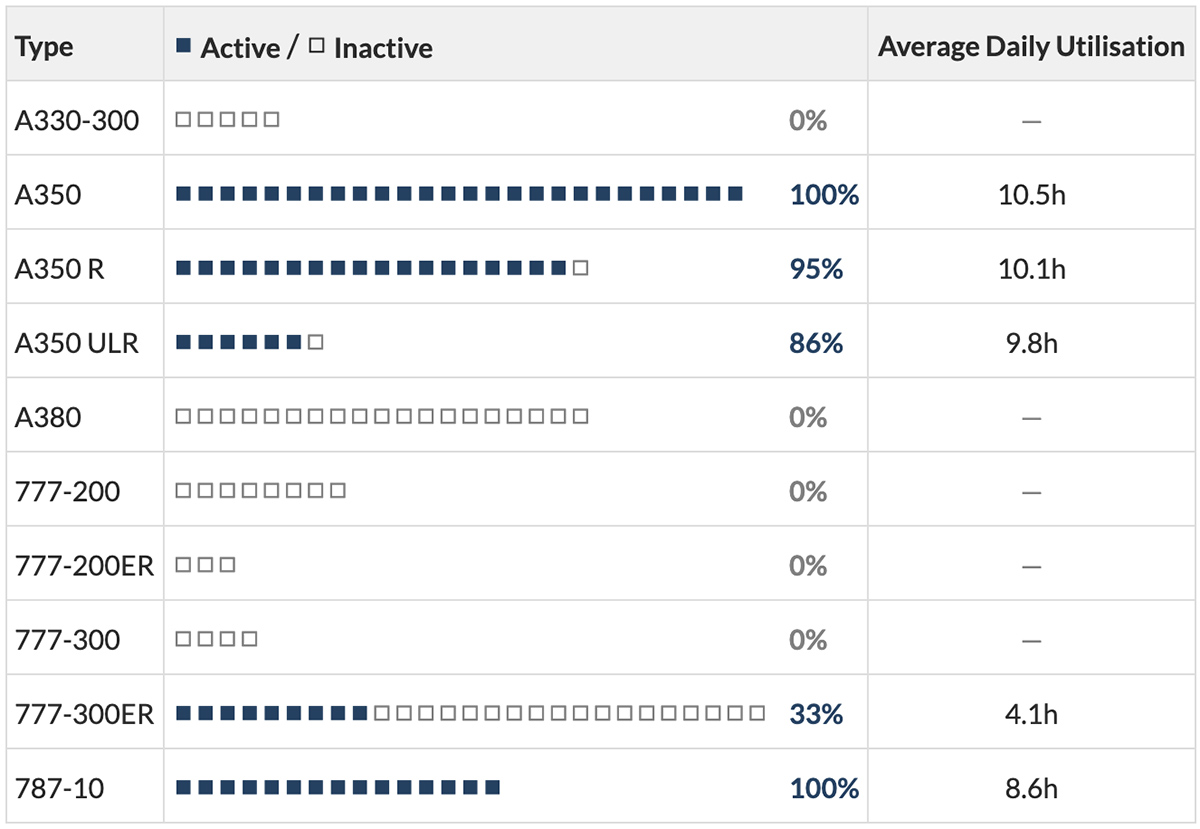 Boeing 777-300ER activity remains low at around 4 hours per aircraft per day. These aircraft continue to mostly be deployed on cargo-only services, with some passenger flights in the mix including to Kuala Lumpur, Bangkok and Ho Chi Minh, where the First Class cabin is not sold.

Airbus A350s and Boeing 787s on the other hand are far busier, with the active aircraft in those fleets clocking up nine to ten hours per day on average.

Four aircraft types in the Singapore Airlines fleet remain in storage this month and are not currently being flown at all, which has mostly been the case since early April 2020:

Most of our readers are now aware of the news, but in case you missed it Singapore Airlines announced the outcome of its fleet and network review in November 2020, outlining which aircraft would not be returning to service after COVID-19.

Following the de-registration of 9V-STC in November, another Airbus A330 (9V-SSD) has been deregistered and left the fleet in December 2020.

The 6-year-old aircraft has been returned to its owner Winter Leasing of Shannon, Ireland. Registered in Austria as OE-IRE, it is now stored at San Bernadino Airport in California, USA, with no apparent onward operator.

9V-SSE should be next to depart for return from lease. The aircraft undertook a test flight on 17th January 2021, it’s first flight in nearly nine months.

The work of the A330 fleet has now been taken up by Airbus A350 Regional and Boeing 787-10 aircraft in the SIA fleet, though there are still five registered A330s in storage at Changi.

Singapore Airlines made some use of its Boeing 787-10 fleet this month to operate charter flights from Dubai to Melbourne, carrying players and officials to the Australian Open.

The first aircraft, 9V-SCK, departed Singapore on 13th January for Dubai, then operated non-stop from Dubai to Melbourne the following evening, a flight of 13 hours and 4 minutes duration. SCK later returned to Singapore.

The following day the same SIN-DXB-MEL-SIN pattern was repeated by 9V-SCN, this time taking 13 hours and 6 minutes on the Dubai – Melbourne leg of the journey.

With the exception of the delivery of 9V-SCA in March 2018, which carried a small ‘passenger’ contingent of media and travel bloggers and took around 14 hours to reach Osaka from Charleston, SCN’s Melbourne – Dubai leg earlier this month is a new passenger-carrying endurance record for the Singapore Airlines Boeing 787-10.

The aircraft has a lower certified takeoff weight than others operating around the world (e.g. with United), since it is only intended to fly SIA routes up to around 10 hours when fully loaded.

Here’s how SIA’s passenger fleet activity looked on 23rd January 2021, which gives us an indication of which aircraft are stored (last flew 14+ days ago), compared to those either active or in ‘active storage’ (last flew more recently).

All the airline’s Airbus A330 aircraft remain stored in Singapore. None have flown passenger flights for the last nine months.

These aircraft are being progressively returned to their leasing companies, a process expected to be completed in Q3 2021.

9V-SSE should be next to depart for return from lease. The aircraft undertook a test flight on 17th January 2021, it’s first flight in nearly nine months.

9V-SSI has yet to make a test flight appearance after sustaining tail damage during a landing incident at Yangon in November 2019. The aircraft was ferried empty to Singapore over a year ago on 14th December 2019, but has not flown since.

The Airbus A350-900 long-haul fleet remains at full strength in January 2021, with an operating fleet of 26 and none in storage.

On average, each aircraft in this fleet is currently flying seven to eight flights per week.