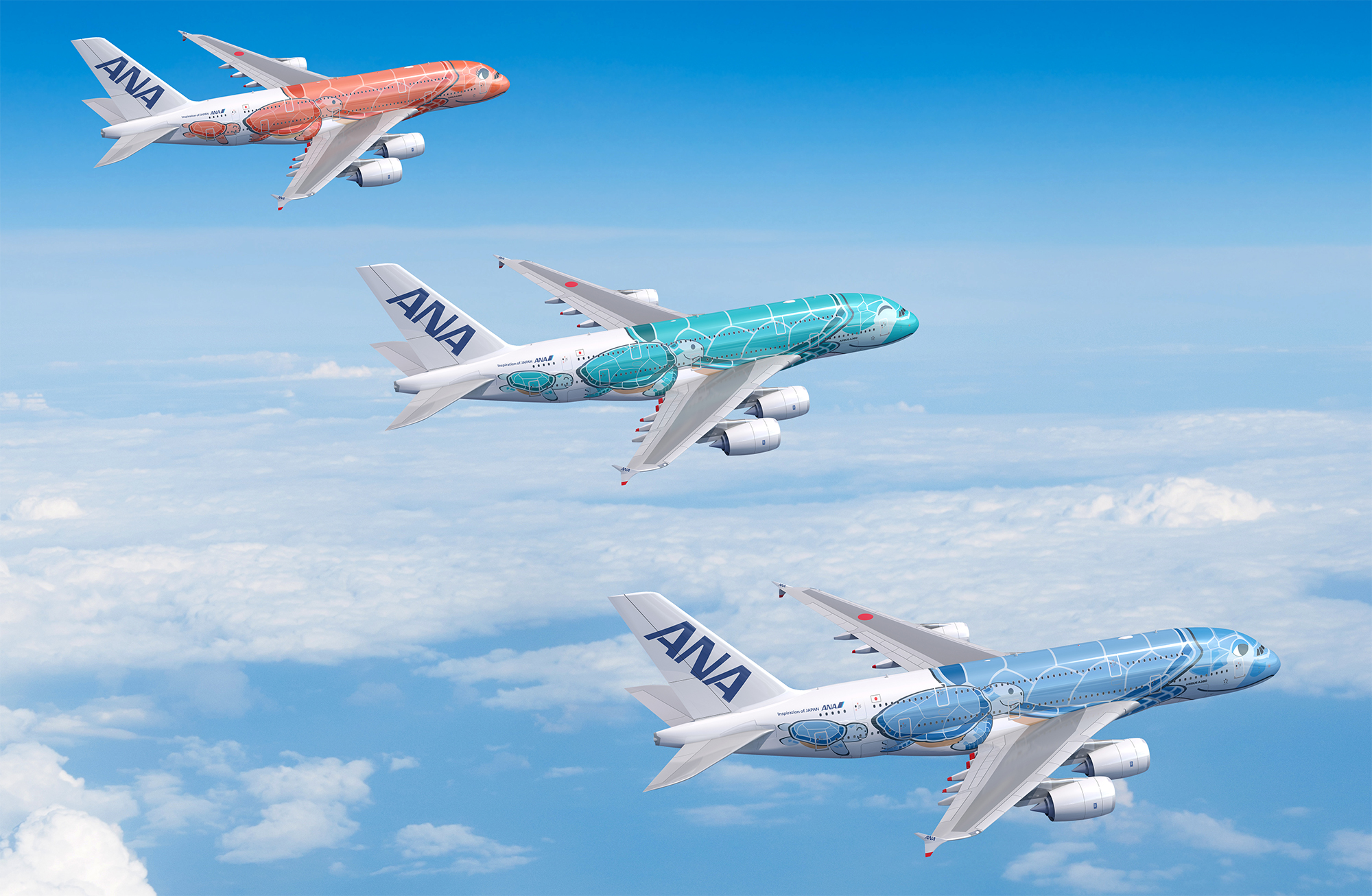 Japanese carrier and Star Alliance member ANA has today revealed plans for its brand new Airbus A380 aircraft, which will enter service exclusively between Japan and Hawaii from spring 2019.

Each aircraft, dubbed the ‘FLYING HONUs’, will feature a unique colour scheme in blue, emerald green or orange, as ANA explain.

Today in a press statement ANA confirmed the aircraft will be fitted with 520 seats in total, comprising:

That’s the densest configuration yet among A380 operators worldwide, with the exception of the Emirates 2-class A380 which seat a whopping 615 passengers.

Here’s how the seat map looks: 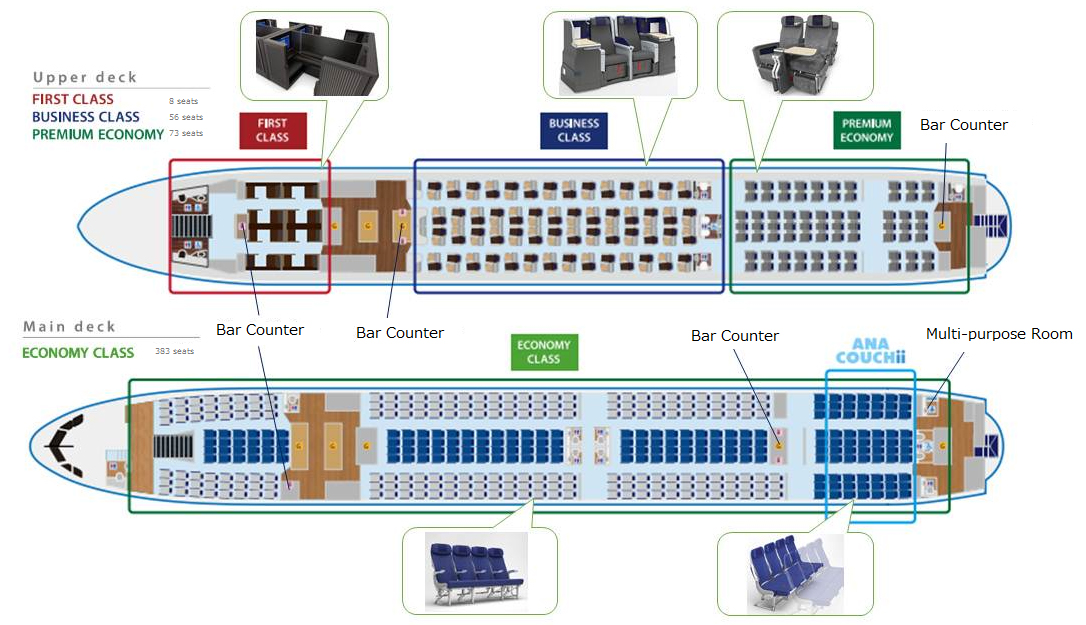 Wi-Fi will be available through the Panasonic Avionics system, though no pricing details have been made available at this stage.

The cabin will also be decorated in “the spirit of Hawaii” with lighting and wall decorations designed with this atmosphere in mind.

In reality of course ANA almost certainly never actually wanted the A380 and were tied into ordering three as part of winning the bid to restructure Skymark Airlines who had ordered six. ANA effectively had to win the bid to access valuable slots at Tokyo’s Haneda airport. This CAPA article summarises the situation quite thoroughly.

Here’s a video ANA have published of the new seats, courtesy of @flightliner.japan on Facebook:

ANA have released some images of the seats they will be installing on the new aircraft, starting with the small two-row first class cabin totalling 8 suites with:

The business class cabin occupies the mid section of the upper deck with 56 flat-bed seats in a staggered 1-2-1 configuration with solo seats by the window – then couple seats and individual seats at alternate middle rows, not unlike the new Singapore Airlines 2018 regional business class we recently reviewed.

The seat features include:

In economy, which occupies the entire main deck of the aircraft in a 3-4-3 layout, you’ll find the relatively standard ANA economy seat offering:

At the very back the last 7 rows have economy seats with a reduced 32″ pitch but which can be converted to ‘couch seats’ a bit like the Air New Zealand Economy Skycouch™. The ANA versions will be called ‘ANACouchii’.

Here’s what ANA says about it:

“Each couch is comprised of three or four seats and passengers are able to lie on the seats by folding up the leg rests. In addition, passengers will receive a dedicated mattress that will provide them with further comfort. This new seat concept will especially enable passengers traveling with small children to have a more relaxed experience in the cabin.”

And here’s how it will look: 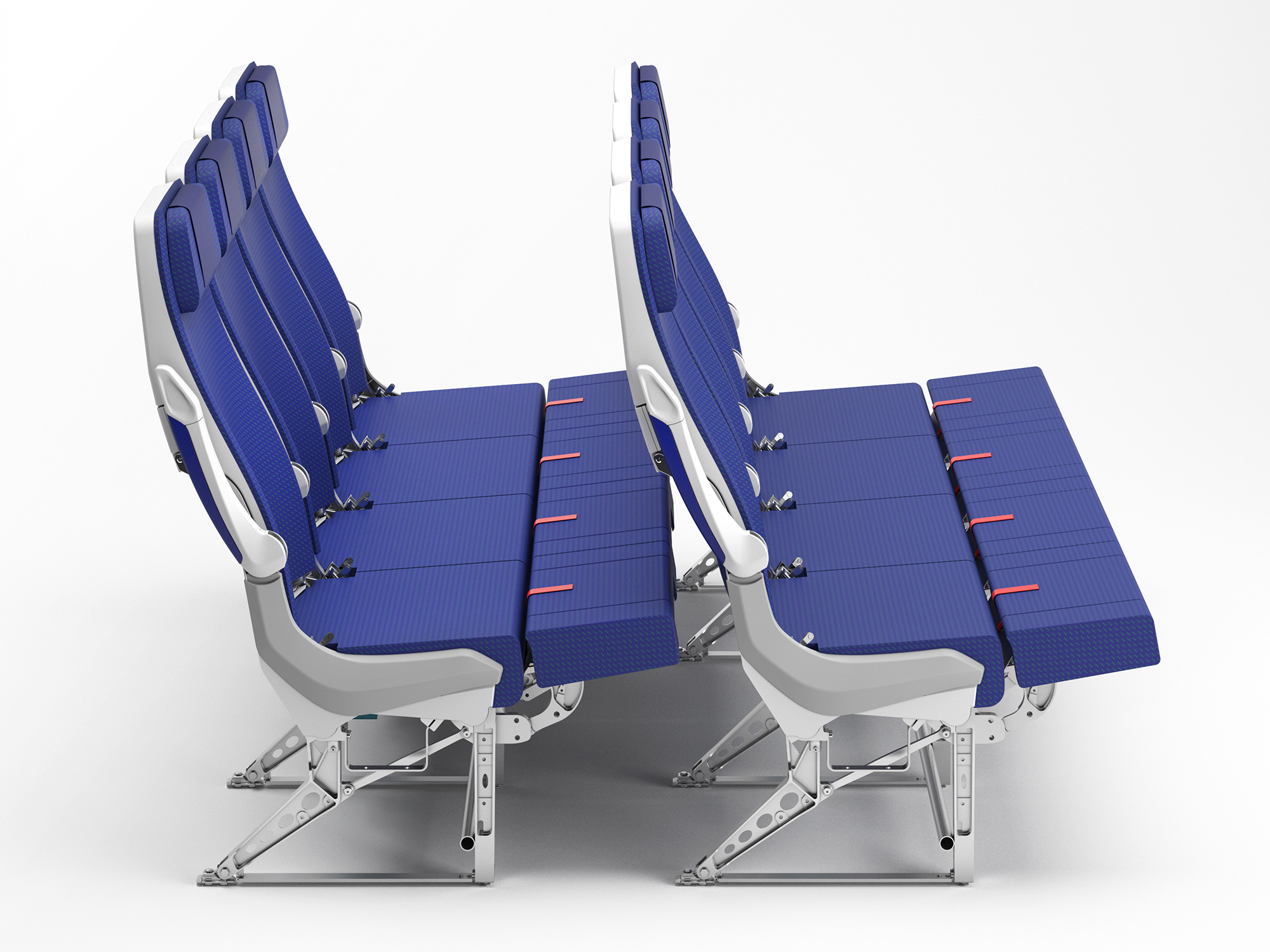 Here are the miles redemption options we expect you will be able to take advantage of once flight timetables for these new flights are loaded later this year.

* ANA Mileage Club requires all redemption flights to be return journeys, the mileage shown here is half the total for a return trip for proper comparison with other FFPs, but there is no option to actually book one-way under ANA Mileage Club.

As you can see the Singapore Airlines KrisFlyer Star Alliance award comes out pretty poorly in comparison to some other frequent flyer programs, especially Lifemiles, Miles & More and MileagePlus.

A large business class cabin of 56 seats in particular bodes well for good redemption availability on these planes.

These new services will also be greeted with a new ANA lounge at Honolulu airport.

Once these aircraft are in service ANA could well become the Star Alliance airline of choice for Singapore-based frequent flyers heading to Hawaii – assuming it’s not already!

We expect regular timings from a fleet of three planes should allow for seamless connections at Narita from the two daily Boeing 787 services departing Singapore – ANA will certainly want that to be the case to drive connecting traffic from around Asia to help fill these huge planes.

The ANA Singapore to Narita 787 flights already feature very comfortable 1-2-1 flat-bed seats in business class – so overall it would be a nice way to reach Hawaii whether you connect into the First Class or Business Class cabin on the A380 for the remainder of your journey.

It’s been a while since we visited Hawaii, but this news certainly has us considering another trip next year!