Skip to content
The SIA group posts a record S$803 million operating loss in Q4, leading to the first ever full-year deficit in its 48-year history 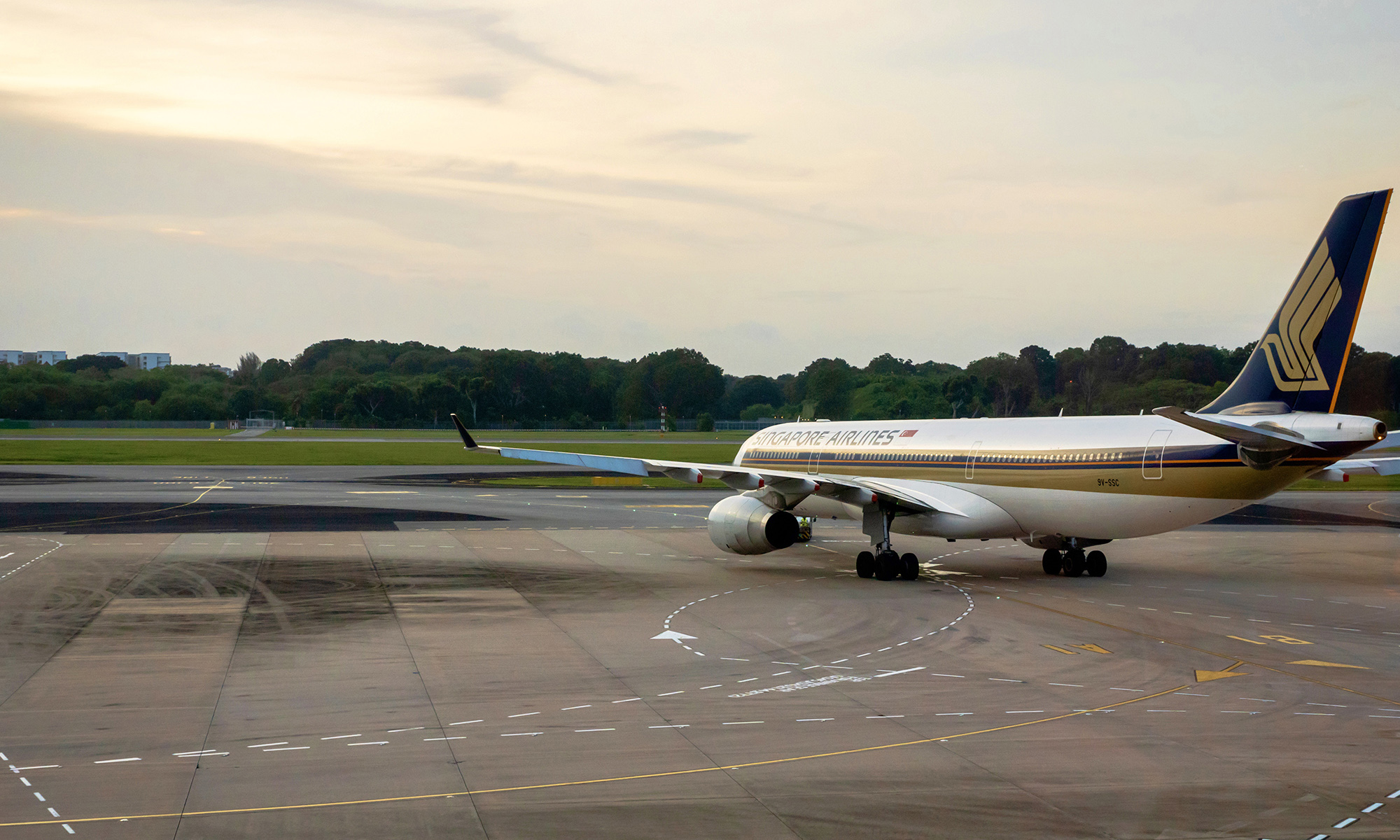 This afternoon Singapore Airlines released unaudited financial results for both its fourth quarter and full financial year 2019/20, with the group recording a record quarterly operating loss of S$803 million and a its first ever full-year net deficit totalling S$212 million.

While the root cause has obviously been the global COVID-19 pandemic, all but wiping out demand for air travel, SIA has also been hit with a significant fuel hedging loss in the final quarter totalling S$908 million. That’s more than eight times the cumulative fuel hedging losses for the group over the previous three quarters.

These results are certainly a far cry from the group’s most recent quarterly update in mid-February 2020, when Singapore Airlines was reporting strong results from its wide-ranging transformation programme and boasted of a solid position to weather the challenges forecast to be posed by COVID-19.

At the time of course, SIA didn’t have a crystal ball. The effects of COVID-19 were predominantly impacting only flights to and from China, and jet fuel was hovering around US$534 per tonne.

Fast forward only six weeks to the end of the financial year in late March 2020, and the airline was announcing an almost total cessation of operations, cutting 96% of flights from April 2020, having already suspended almost half its flights in the final few months of March.

To add insult to injury, the pump price for jet fuel had plummeted to around US$230 per tonne.

The impact on the aviation industry is well documented, with Changi Airport recently revealing that only around 800 passengers a day were being processed through the facility in April 2020, a 99.5% drop.

Both Terminal 2 and Terminal 4 have been closed at the airport, for 18 months and “until further notice” respectively.

Today, the group announced a record quarterly net loss of S$732 million and a record (first ever) full-year loss of S$212 million, having accrued a S$520 million net profit and S$862 million operating profit during the first three quarters of the financial year from April to December 2019.

The group’s operating loss during the fourth quarter (January to March 2020) stood at S$802 million, with net loss at S$732 million. The airline stated that “market conditions deteriorated abruptly in February 2020 as the Covid-19 outbreak started to spread globally”.

“All passenger airlines in the Group were adversely affected by the Covid-19 pandemic in the final quarter of FY2019/20, leading to a sharp deterioration in operating performances for the financial year.” Singapore Airlines 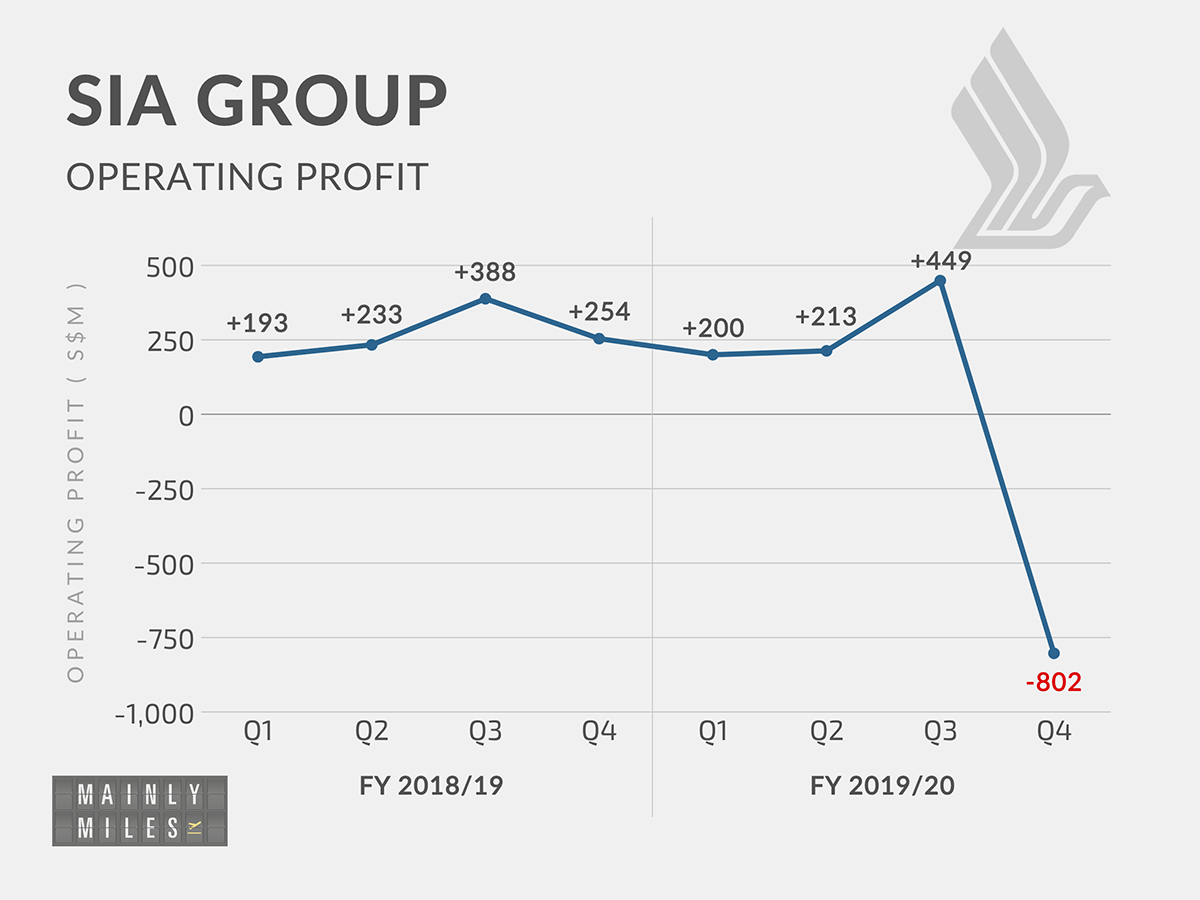 “The Group reported a net loss of $732 million for the quarter, a reversal from a profit of $203 million last year (-$935 million). This arose mainly from the deterioration in operating performance (-$1,056 million), partially offset by higher tax credit (+$184 million).” Singapore Airlines

Here are the operating profits of each group division in FY 19/20, compared to the previous financial year.

Operating profit for the financial year stood at S$59.1 million, a 94.5% reduction from the S$1,067.1 million during the previous year.

Despite what the SIA Group described as “strong results” in the first nine months of the financial year, it was actually only two of its major divisions ‘in the black’ during that period; Singapore Airlines’ mainline operation and SIA Engineering Company (SIAEC).

Both Scoot and SilkAir had already clocked up losses during the April 2019 – December 2019 period, of S$73 million and S$12 million respectively.

Here’s how each division fared during the full financial year.

The mainline carrier recorded the following results during the financial year.

Operating profit was very positive during the third quarter of the financial year, as the transformation programme was credited with generating strong results.

Quarter 4’s performance wiped out all of the excellent Q3 gains, reducing the airline’s full-year operating profit to S$294 million, while load factor reduced by close to a fifth.

This passenger falloff was likely most significant in March 2020, but effectively COVID-19 was the undoing of almost all the year’s gains.

Scoot suffered a fall in load factor in the fourth quarter of the financial year, as it scaled back services to mainland China (making up a third of its operations) and the impact of COVID-19 restrictions began to dent demand for travel.

“The poor [Scoot] revenue performance for the year was largely due to the outbreak of Covid-19 in the fourth quarter.” Singapore Airlines

Overall, the budget subsidiary recorded a S$198 million full-year operating loss, having only made a small profit in the October – December 2019 quarter.

Scoot has now not made meaningful profit in any single quarter for two consecutive years, having recorded only modest S$1m gains in two quarters of FY 18/19, with multi-million dollar losses in the other two quarters that year.

SilkAir was already suffering from the grounding of the Boeing 737 MAX aircraft during the last financial year, so it looked unlikely the subsidiary would post a full-year profit even without the COVID-19 impact.

Clearly in the final quarter the regional subsidiary’s fortunes took a turn for the worse, with flights around one fifth emptier than before and an operating loss of S$100 million for the January to March 2020 period.

The SIA Engineering Company (SIAEC) is so far the only major group division apparently relatively immune from the COVID-19 outbreak, with consistent profits throughout the year.

Sustained profits in SIAEC are likely to continue given the workload involved in maintaining over 50 of the group’s aircraft currently not being used and parked at Changi.

Singapore Airlines forewarned the market in April 2020 that its fourth quarter and financial year 2019/20 would be impacted by “substantial” fuel hedging losses.

The airline has now recorded what it calls a “fuel hedging ineffectiveness” (a fuel hedging loss) of S$710 million, in addition to its usual ‘miss’ on future prices.

“Fuel prices plunged towards the end of the quarter as the demand for oil slumped due to the Covid-19 pandemic amid an unexpected price war and a consequent supply glut. This led to fuel hedging losses on contracts maturing during the quarter. Furthermore, the expected capacity cuts in FY20/21 will lead to lower fuel consumption than previously anticipated based on normal operating conditions, causing the Group to be in an over-hedged position. As a result, the Group had to record substantial mark-to-market losses of $710 million on these surplus hedges.” Singapore Airlines

This needs to be added to the ‘regular’ fuel hedging loss of S$198 million during the quarter. That’s a grand total of S$908 million loss attributable to fuel hedging in the last three months of the fiscal year.