This month Singapore Airlines has been actively operating its highest number of passenger aircraft since the COVID-19 pandemic decimated flight schedules in March 2020, with 66 of its wide body jets flying a mixture of passenger and cargo-only flights over the last two weeks.

Before we dive in to our regular monthly update and storage report, here are some key news items for the SIA fleet this month:

The official registered aircraft data in combination with recent retirement announcements and analysis of actual flight movements over the last few weeks allows us to determine the actual ‘in service’ fleet (available to the airline) of 106 planes at 28th November 2020, 66 of which are currently active.

Almost all Airbus A350s and Boeing 787-10s are now in consistent use, while the deployment of Boeing 777-300ERs has increased over recent weeks, with the airline actively using 66 aircraft in November 2020, it’s highest total in seven months.

Here’s a graphical look at the active vs. stored fleet, including the average daily utilisation per active aircraft based on the 7-day period between 16th November and 22nd November 2020. 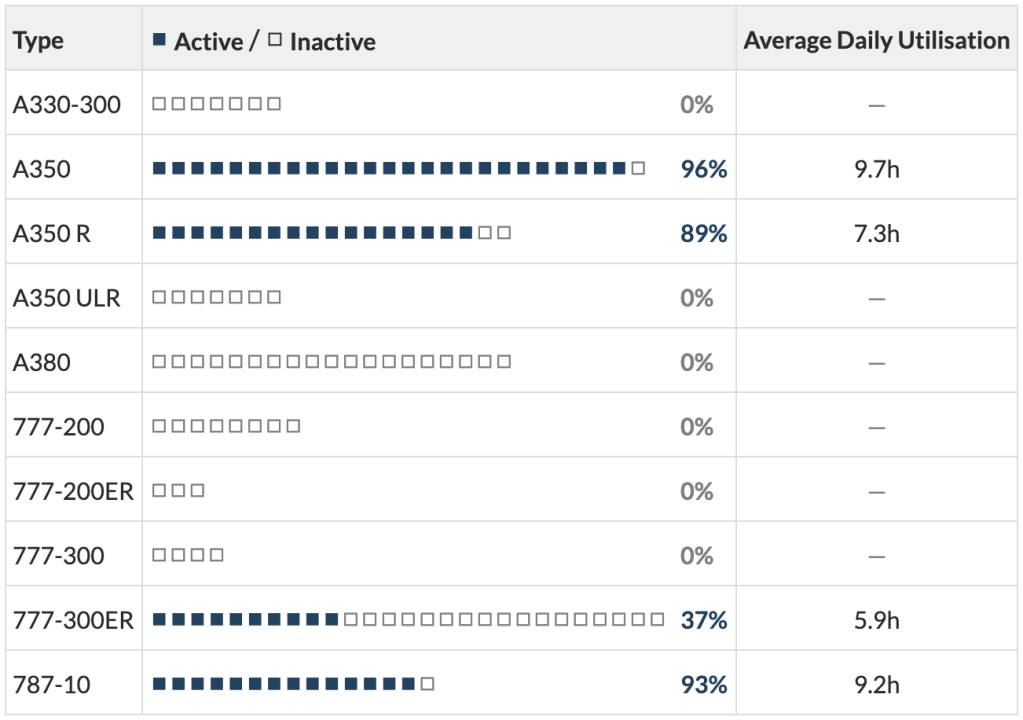 The increased active fleet of Boeing 777-300ERs this month also coincided with a ramp-up in their average flying activity, from 1.6 hours per aircraft per day in October to 5.9 hours in November. The aircraft continue to mostly be deployed on cargo-only services, with some passenger flights in the mix including to Bangkok and Surabaya, where the First Class cabin is not sold.

Airbus A350s and Boeing 787s on the other hand are far busier, with the active aircraft in those fleets clocking up seven to ten hours per day on average.

The Airbus A350 long-haul fleet is now very stretched, due to the significant downtime the aircraft are spending in Europe and the USA (over two days each time they visit in some cases), to accommodate the restricted schedule and minimise crew layover durations in high-risk countries.

Some of these types will not be returning to service even after COVID-19, following a fleet and network review undertaken by the airline and announced earlier this month alongside the first half financial results.

The last Boeing 777-300 has now been withdrawn from service.

9V-SYJ, which has been the only one of four remaining 777-300 aircraft flying for the carrier over the last five months, made its final flight on 29th October 2020 from Bangkok to Singapore. That has sealed the fate of both the 2006 First Class and 2009 Regional Business Class seats.

The carrier opted for the more capable Boeing 777-300ER variant for its deliveries since November 2006, an aircraft that became far more popular globally than its predecessor and indeed in the Singapore Airlines fleet, with 27 still registered to the carrier and no retirements yet announced.

Only two of the airline’s 19 Airbus A350 Regionals are not currently active; 9V-SHD, which stopped flying in early November, and 9V-SHF, which hasn’t flown for over four months.

The A350 ULR is back in December

Another A350 sub-fleet is rejoining active service next month, the Ultra Long Range (ULR) variant, which we didn’t expect to see back in action this year.

That will happen on 15th December 2020 with three times weekly service to San Francisco. Oddly this route doesn’t even require the range of the ULR model and was originally scheduled to be served only by the regular 3-class long-haul Airbus A350 this winter.

Here’s how the limited return of the ULR will look on the route.

As with the airline’s other long-haul services, the aircraft and crew will rest together in San Francisco for around 51 hours before returning to Singapore, meaning at least two A350 ULRs will need to be activated from storage for this route.

That’s because each time an aircraft departs on this route, it doesn’t land back until nearly 84 hours later.

Even though these seven aircraft have been grounded in Singapore since US flights were suspended in late March 2020 due to the COVID-19 outbreak, they have made occasional test flights at Changi, the most recent being yesterday (27th November).