Singapore Airlines is rounding off a torrid year operating its busiest schedule and highest number of passenger aircraft since the COVID-19 pandemic brought an almost complete halt to operations in April 2020. This month 70 of the airline’s wide body jets are flying a mixture of passenger and cargo-only flights.

Though we’ve already said goodbye to many older aircraft types, there’s a formal farewell this month for the airline’s longest-serving Airbus A330, and a sign of yet more new aircraft deliveries to come in the New Year.

Looking forward we should also see the introduction of ex-SilkAir Boeing 737-800s to the Singapore Airlines fleet in 2021, plus the return of Boeing 737 MAX 8s into service.

The official registered aircraft data in combination with recent retirement announcements and analysis of actual flight movements over the last few weeks allows us to determine the actual ‘in service’ fleet (available to the airline) of 106 planes at 24th December 2020, 70 of which are currently active.

Almost all Airbus A350s and Boeing 787-10s are now in consistent use, while the deployment of Boeing 777-300ERs remains at around a third of that fleet, with the airline actively using a total of 70 aircraft in December 2020, it’s highest total in eight months.

Here’s a graphical look at the active vs. stored fleet, including the average daily utilisation per active aircraft based on the 7-day period between 14th December and 20th December 2020. 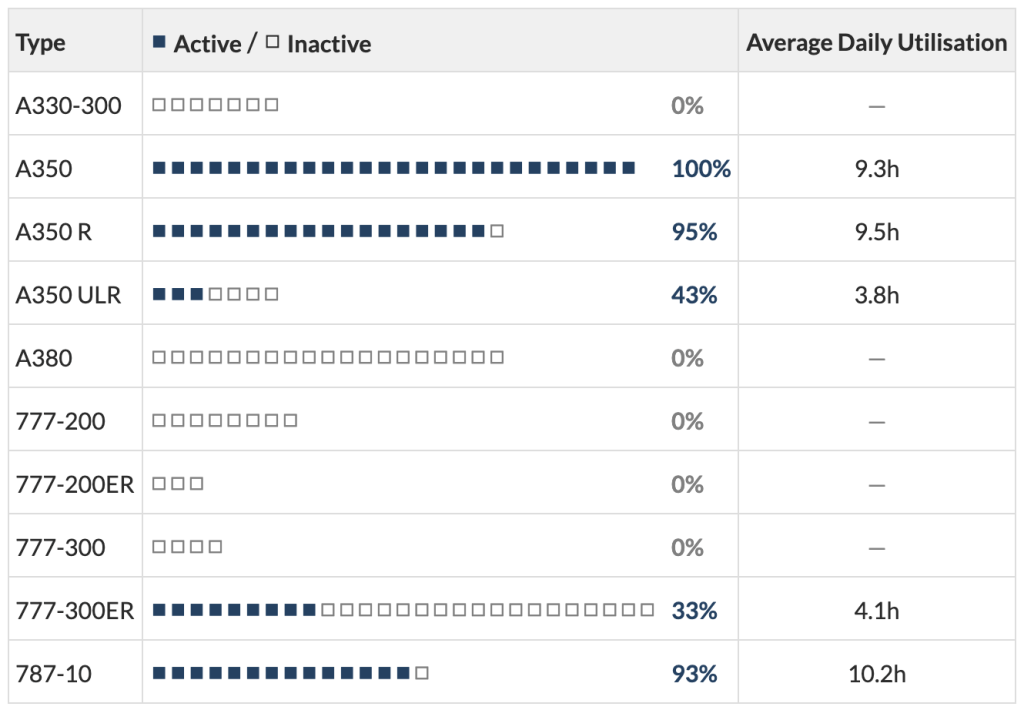 Boeing 777-300ER activity remains low, dropping from 6 hours on average per aircraft in November to around 4 hours in December. These aircraft continue to mostly be deployed on cargo-only services, with some passenger flights in the mix including to Bangkok and Ho Chi Minh, where the First Class cabin is not sold.

Airbus A350s and Boeing 787s on the other hand are far busier, with the active aircraft in those fleets clocking up nine to ten hours per day on average.

The Airbus A350 long-haul fleet continues to be very stretched, due to the significant downtime the aircraft are spending in Europe and the USA (over two days each time they visit in some cases), to accommodate the restricted schedule and minimise crew layover durations in high-risk countries.

This partly explains the return to service of the Airbus A350 ULRs, with those three active aircraft gently re-entering service this month flying an average of 4 hours per day.

This will ramp up as all seven aircraft are brought back into operation with daily New York and San Francisco flights from mid-January 2021.

Four aircraft types in the Singapore Airlines fleet remain in storage this month and are not currently being flown at all, which has mostly been the case since early April 2020:

In case you missed the news, many of these stored aircraft will not be returning to the Singapore Airlines fleet even after COVID-19, following a fleet and network review undertaken announced in early November alongside the carrier’s first half financial results.

Why was 9V-STC so interesting? It was the longest-serving Airbus A330 in the fleet by far. First delivered on 25th February 2009 as the airline’s third model on an initial five-year lease, it ended up registered to the airline for nearly 12 years!

We can only assume Singapore Airlines got a very good lease renewal deal or two from the aircraft’s owner, DAE Capital, since it remained in the fleet while other much newer A330s were returned after lease expiry.

9V-STC operated its final passenger service from Yangon to Singapore on 2nd April 2020, making it the last A330 in the fleet to carry passengers, just as the airline wound its operations up to a skeleton schedule 96% smaller than usual for the month due to COVID-19.

The aircraft was formally deregistered on 21st December 2020 and has been transferred to Air Canada as C-GHKC, but has yet to leave Changi.

The work of the A330 fleet has now been taken up by Airbus A350 Regional and Boeing 787-10 aircraft in the SIA fleet, though there are still six registered A330s in storage at Changi.

Another A350 Regional is coming

Speaking of A330 replacements, on the same day 9V-STC was formally deregistered from Singapore the next brand new Airbus A350 took its first flight in Toulouse.

The aircraft, which will be 9V-SHT on delivery, is part of the next batch of four A350s due for delivery in relatively close succession.

Registrations (and therefore variants) have not been assigned for the next three aircraft, so we’re not sure at this stage whether these will also be Regional or perhaps Long Haul models.

Last time SIA took a batch of new A350 Regionals it waited for four to accumulate in Toulouse then had them delivered in close succession, so it could still be a few more months before we see these next four join the fleet.

The A350 ULR is back in service

As we announced last month, Singapore Airlines’ Airbus A350 ULRs have returned to service on the recently reinstated San Francisco route, operating three times per week.

At this stage three of the seven aircraft in this sub-fleet have been operating, however we expect all seven will return to active service by mid-January 2021, when the New York JFK route switches to daily A350 ULR service and San Francisco also becomes daily on the ULR.

Here’s how SIA’s passenger fleet activity looked on 24th December 2020, which gives us an indication of which aircraft are stored (last flew 14+ days ago), compared to those either active or in ‘active storage’ (last flew more recently).

All the airline’s Airbus A330 aircraft remain stored in Singapore. None have flown passenger flights for the last nine months.

These aircraft are being progressively returned to their leasing companies, a process expected to be completed in Q3 2021.

9V-STC completed a test flight on 9th November 2020. It was formally deregistered on 21st December 2020 and transferred to Air Canada as C-GHKC, but has yet to leave Changi.

9V-SSI has yet to make a test flight appearance after sustaining tail damage during a landing incident at Yangon in November 2019. The aircraft was ferried empty to Singapore over a year ago on 14th December 2019, but has not flown since.

The Airbus A350-900 long-haul fleet rose to full strength for the first time since the pandemic, with 9V-SME breaking its eight-month absence with a flight to Amsterdam on 28th November 2020, following a test flight earlier in the day.

The aircraft is now back in regular service, bringing the operating fleet to 26 with none in storage.

On average, each aircraft in this fleet is currently flying six to seven flights per week.