Singapore Airlines has scaled back its active passenger aircraft total slightly to 72 in recent weeks, from 74 in January 2021, as the carrier prepares to introduce Boeing 737-800s into its fleet from March 2021. Airbus A350s and Boeing 787s continue to cover the bulk of the operating network.

Meanwhile another Airbus A330 has departed Singapore back to its lessor, dwindling the total in this (stored) fleet to just four aircraft, and there’s been an Airbus A380 ‘shuffle’ in anticipation of the next cabin refit at Changi.

The official registered aircraft data in combination with recent retirement announcements and analysis of actual flight movements over the last few weeks allows us to determine the actual ‘in service’ fleet (available to the airline) of 106 planes at 27th February 2021, 72 of which are recently active.

There will also a nine Boeing 737-800s and an unknown number of Boeing 737 MAX 8s joining the fleet in 2021, as the SilkAir merger enters its final stage.

Only four aircraft types are currently in service with the airline, as shown in the table below outlining the number in use at each of our monthly fleet update ‘snapshots’.

Almost all Airbus A350s and Boeing 787-10s remain in consistent use, while the deployment of Boeing 777-300ERs is still at around a third of that fleet, with the airline actively using a total of 72 aircraft in February 2021.

Here’s a graphical look at the active vs. stored fleet, including the average daily utilisation per active aircraft based on the seven-day period between 15th February and 21st February 2021. 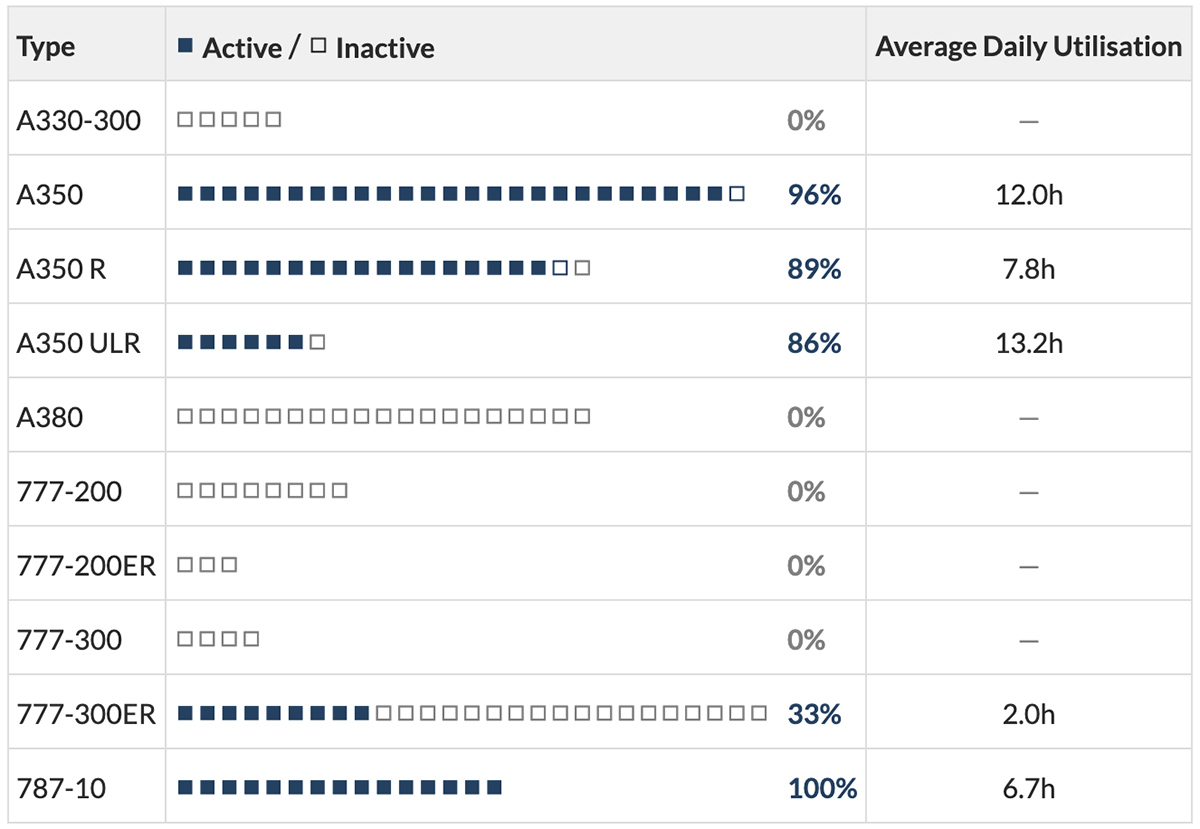 Boeing 777-300ER activity was low at just 2 hours per active aircraft per day. These aircraft continue to mostly be deployed on cargo-only services, with some shorter passenger flights in the mix including to Kuala Lumpur, Bangkok and Ho Chi Minh, where the First Class cabin is not sold.

Airbus A350s and Boeing 787s on the other hand are far busier, with the active aircraft in those fleets clocking up seven to 13 hours per day on average.

Other aircraft types in the Singapore Airlines fleet remain in storage this month and are not currently being flown at all, which has mostly been the case since early April 2020:

Another Airbus A330 has departed

Following the de-registration of 9V-STC in November last year and 9V-SSD the following month, another Airbus A330 (9V-SSE) was deregistered in January 2021.

The aircraft is now back with its lessor on the Austrian register as OE-IEK. It was ferried from Singapore to Pinal Airpark (MZJ) in Arizona for storage in mid-February.

It’s fair to say -SSE wasn’t the luckiest A330 in the Singapore Airlines fleet over its five-year service life. It suffered an engine failure on departure out of Dhaka in February 2018, when a fan blade separated from the engine, causing it to divert to Mandalay.

In January 2020, it was struck by a catering truck, causing damage to its cargo door, requiring its complete removal and replacement.

9V-SSF will presumably be the next A330 to depart for return from lease.

The work of the A330 fleet has now been taken up by Airbus A350 Regional and Boeing 787-10 aircraft in the SIA fleet, though there are still four registered A330s in storage at Changi.

Airbus A380s shuffle for a refit

Earlier this week one of SIA’s Airbus A380s (9V-SKL) was flown to storage in Alice Springs, but this wasn’t a net addition to the seven superjumbos already parked there.

Shortly after it arrived, a previously stored A380 (9V-SKQ) was flown from Alice Springs to Sydney, for a short maintenance visit.

SKQ has since been flown back to Singapore, where it will be the fifth older A380 to be refitted with the airline’s latest cabin products, SIA confirmed to Mainly Miles.

9V-SKL had been stored at Changi since its last passenger service on 27th March 2020, while 9V-SKQ had been in desert storage for a total of almost eight months, having been relocated to the Alice Springs facility on 27th June 2020.

We understand the cabin refit programme for the three remaining aircraft, including 9V-SKQ, will be completed by the end of this year, bringing the fleet of A380s with the latest products to 12 – it’s future total.

The merger of SilkAir into Singapore Airlines is set to enter its final stage next month, with nine Boeing 737-800s progressively moving across to the SIA mainline fleet, and the first three of eight confirmed routes picking up narrow-body SQ service.

These aircraft had not been formally transferred to the Singapore Airlines Air Operator Certificate at the last CAAS registry update on 31st January 2021, however we expect them to start moving across this month.

Here are details of the nine aircraft, including the date of their final passenger flight with SilkAir.

We understand all nine aircraft have now been repainted in SIA colours.

Don’t miss our full rundown of what to expect on board these narrow-body aircraft, from food and drink to windowless seats, entertainment options and cabin crew uniforms, as they start to enter service with SIA.