Australia’s Qantas announced in October last year that it would be launching a brand new First Class lounge at Singapore Changi Airport. Dubbed the ‘Qantas First Lounge’, it is set to open its doors in November 2019, providing a much-needed capacity boost for the airline at its largest hub outside Australia.

The Qantas First Lounge, whose layout and fittings are being led by industrial designer David Caon in collaboration with Sydney-based architects Akin Atelier, will have capacity for 240 guests.

That means a large area of the lounge is set aside for seating, with a mixture of private ‘booths’, low armchairs, sofas and desk-style options.

It’s not surprising therefore that many of the design features common to those facilities will filter through to this new lounge, with white marble, oak wood accents and highlights of greenery.

A significant space in this lounge will be dedicated to the live open kitchen and à la carte dining area.

Qantas International CEO Alison Webster said the airline “knows Qantas customers like to dine in the lounge to maximise sleep onboard, so the layout will offer generous and comfortable seating options, ideal for eating, working or relaxing”.

The pre-flight dining option is bound to be popular with passengers flying on shorter overnight flights to Australia. Even those heading to London around midnight may be keen to eat before departure and prioritise sleep on board.

Every First Class lounge is best rounded off with a tended cocktail bar, whether it be for those pre-flight martinis, barista-made espressos or just a casual glass of beer or Aussie Sauvignon Blanc.

Champagne is a certain addition to the lineup, with the Qantas Sydney First Lounge offering three varieties.

The bar area appears to feature low armchairs and bar stool seating options. Other lounge features will of course include shower facilities and plenty of device charging stations.

The Singapore Qantas First Lounge will be at Terminal 1’s ‘D’ gates, unlike the existing Qantas lounge which is located in a mid-terminal position, closer to the airport’s ‘C’ gates.

As reported by Australian Business Traveller the exact location appears to be adjacent to the Aerotel Transit Hotel reception (see our review here), just above gate D40.

Like the existing Qantas Singapore Lounge, this new facility will not have any immediate outside views and will instead overlook an internal terminal area – in this case Changi’s T1 ‘D’ gates arrivals immigration hall.

Qantas is using virtual reality (VR) in the development of the Singapore First Lounge. David Caon and his team have created an immersive virtual reality representation of the design concept, providing a better way for Qantas to preview and fine tune lounges. A similar approach is being used for the airline’s upgrade of its A380 cabins.

This short video shows the VR concept in use.

“While we already use VR technology to promote destinations, this is the first time we have used it to better understand a lounge design. Being able to immerse ourselves in a virtual lounge gives us a more accurate sense of space and an understanding of how it will look to scale,” said Ms Webster.

“Virtual reality brings the 2D drawings and photos to life, and for this project in particular, it has sped up the consultation process between our design team and Qantas,” said Mr Caon.

Qantas told us the opening hours for this new lounge have not yet been officially announced, though as we predicted in October last year (and Australian Business Traveller reported this month) the hours will be similar to the 2.30pm – midnight opening of the existing Qantas (Business) Singapore Lounge.

Qantas confirmed to Mainly Miles that the access policy for the Singapore Qantas First Lounge will mirror that seen at the carrier’s First Class facilities at Australian airports.

In other words you’ll have to fall into one of the following categories to gain access to this lounge:

You must be departing on a Qantas or Emirates flight, or on a oneworld member operated flight:

* Access for Emirates Platinum Skywards status holders is applicable only for departing on QF/EK flights.

This lounge is also available to passengers flying on a Jetstar (3K/JQ/BL) flight:

If you’re a Qantas Platinum (or oneworld Emerald) status holder, the access policy is good news for you. Provided you are departing on a oneworld marketed and operated flight from Changi in any class of service, you will be eligible to use this lounge (subject of course to the opening hours).

The following oneworld airlines operate from Changi (from T1 unless stated):

That means as a oneworld Emerald status holder from as little as S$104 (based on fares in March 2019) you can book an afternoon or evening Malaysia Airlines Economy Class flight to Kuala Lumpur and make use of this lounge, which sits directly at the end of a short airside SkyTrain journey from T2.

Other oneworld schemes like Asia Miles also provide options, but if you haven’t got any Avios see our article from last year about why it’s a good idea to have a stash of these at your disposal for good value redemptions in the region.

As Qantas Platinum / Platinum One, you can also use this lounge when departing on any Jetstar Asia (3K), Jetstar Australia (JQ) or Jetstar Pacific (BL) flight from Changi. Needless to say, there are some low fares here for you lucky few, and check-in opens 2 hours 45 minutes prior to departure time (3 hours 45 minutes before departure for JQ flights).

Here it’s a more complicated (and potentially costly) method to use this lounge. You will have to actually be flying First Class with Qantas, Emirates or British Airways.

Emirates First Class passengers in particular will be pleased about the new lounge, with the airline’s own revamped facility in the ‘C’ wing of Terminal 1 still not featuring any dedicated First Class section.

None of the other oneworld airlines operate a First Class cabin from Singapore, with the exception of Cathay Pacific who offer occasional First Class configured 777-300ER aircraft sporadically on the Hong Kong route. Regular equipment swaps however make this a risky option, you can easily find yourself downgraded to Business on the day.

A First Class redemption on Qantas to Australia (Melbourne or Sydney) will set you back:

While to London it costs: 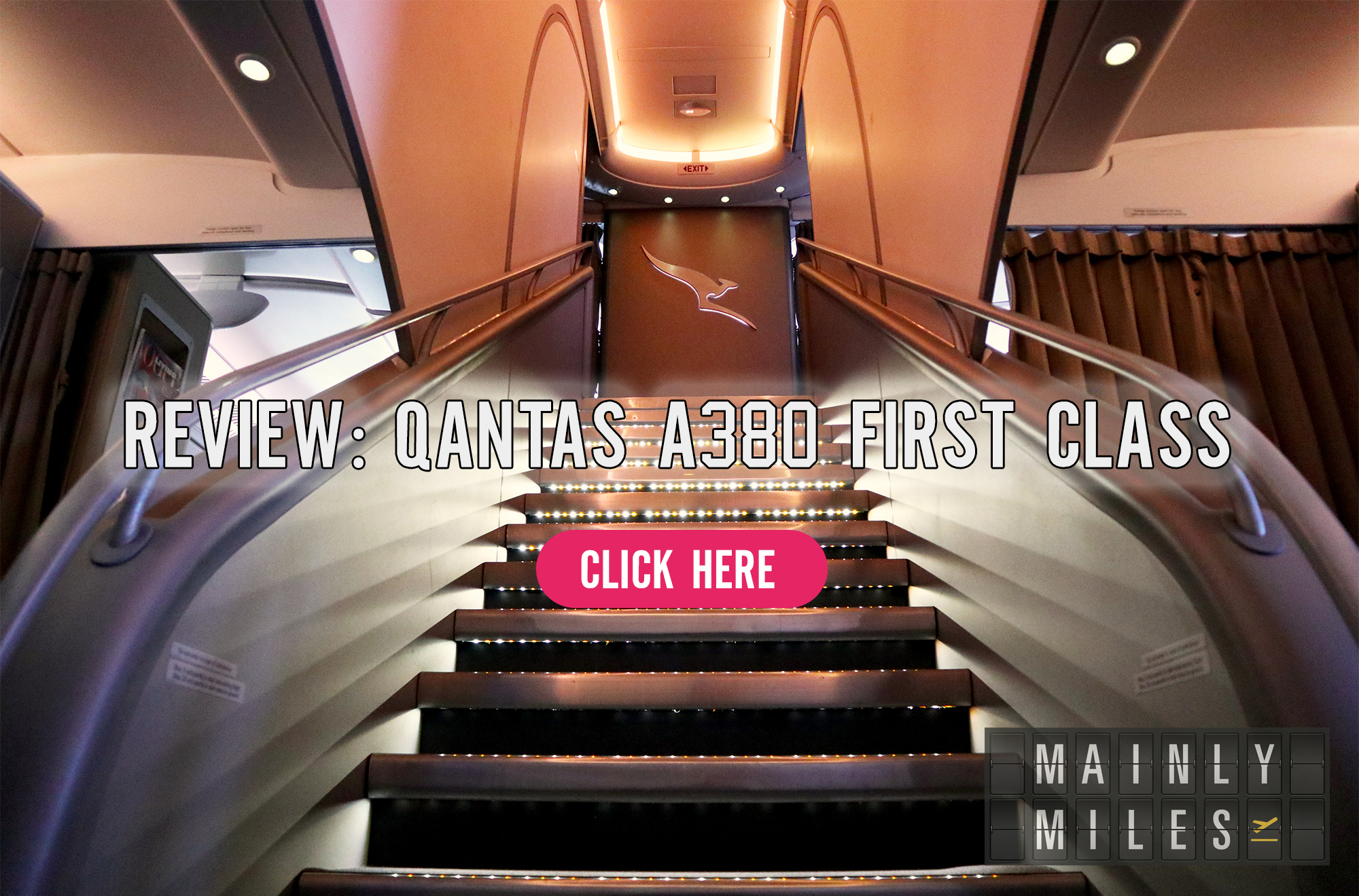 See our review of the Qantas First Class seat on the A380 here.

Emirates First Class to Brisbane, Dubai or Melbourne will cost you 85,000 Skywards miles or 90,000 Qantas points.

In other Qantas news, refits of the airline’s 12 Airbus A380s with upgraded cabin products, including the new Business Suites as featured on the Boeing 787 and most Airbus A330s, have been postponed slightly.

Originally due to start in March, Australian Business Traveller recently confirmed that the first aircraft will now commence refit work in July this year, with service entry in October.