Skip to content
Singapore Airlines is still flying its older 2009 Regional Business Class seats on a range of longer flights. On the whole though, they're now easy to avoid. 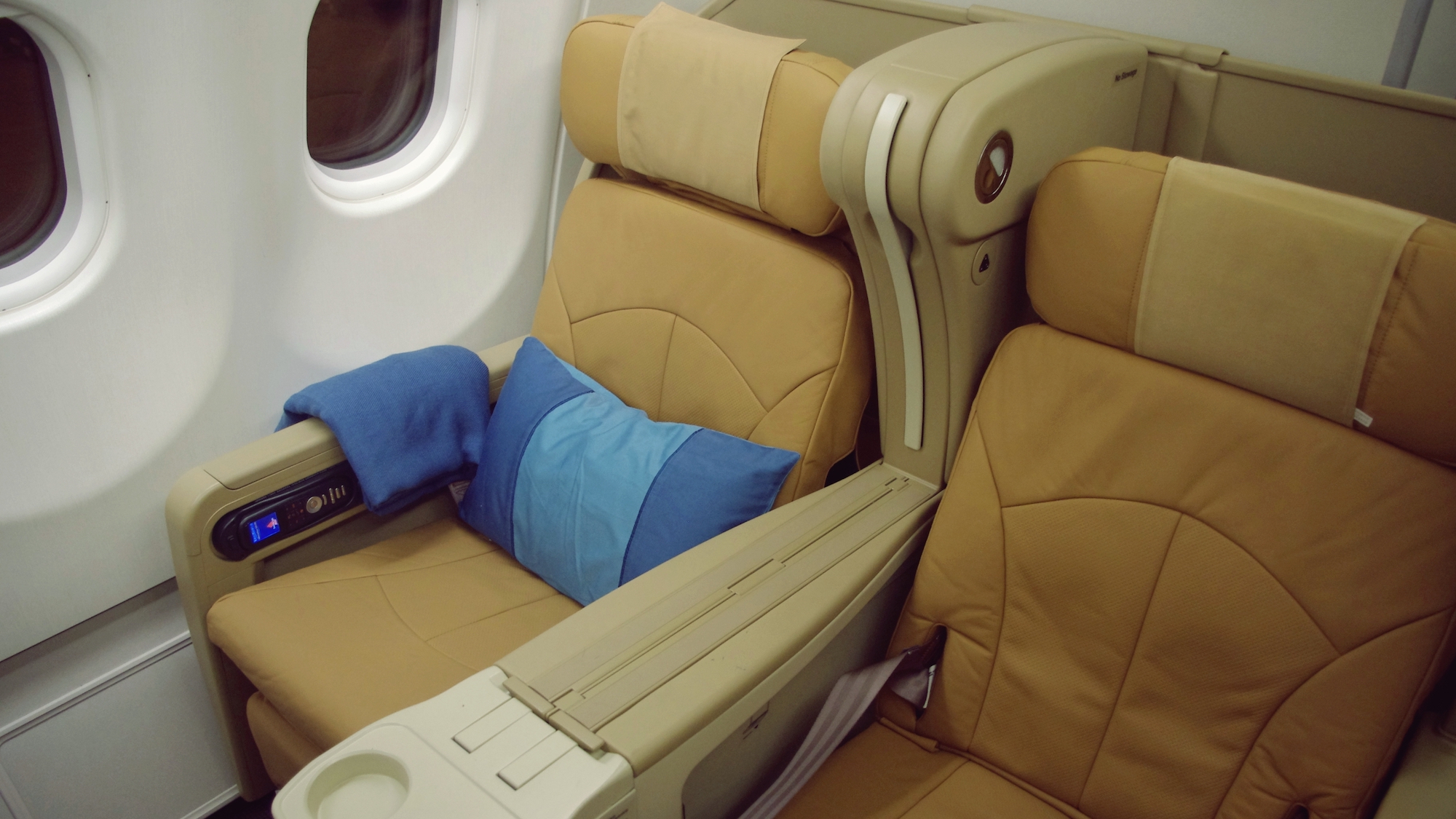 Last month we updated our Business Class seats by Route analysis all the way through to the end of the northern winter schedule in late March 2020, showing you route by route and flight number by flight number which seat type to expect on your next Singapore Airlines flight.

Better still, the permanent guide is continually updated, at least once per month and more often if necessary, so you always have the latest information at your fingertips before having to do dummy bookings or examine seat maps on the painfully slow Singapore Airlines website.

A couple of weeks ago we looked at where you’ll find the airline’s long-haul Business Class seats flying on short Singapore Airlines routes, of 6 hours duration or less.

This analysis is almost the exact opposite; where you’ll still find the older 2009 Regional Business Class seats on longer routes.

We think it’s probably still reasonable to ‘slum it’ in the 2009 RJ seat on flights up to 4 hours 55 minutes, but over that 5 hour mark it starts to become a drag, especially if you’re flying solo in a full cabin or the flight is overnight and you were hoping to sleep.

We’ve therefore looked in this case at where those seats are found on flights of 5 hours or more.

Singapore Airlines flies two different types of Regional Business Class seat in its fleet, but the one we’re trying to avoid here on these longer flights is the decade-old 2009 version.

Which aircraft have 2009 RJ seats?

Why is it important?

With 2018 seeing us wave goodbye to the old Spacebed Business Class, shortly followed by the Ultimo Blue Recliner seats, there was a small sigh of relief as the 2009 Regional Business Class product became the oldest in the fleet – the worst you could get.

Less than a month later though, and Singapore Airlines soon piqued some new-found excitement over Regional Business Class when it revealed its 2018 version on the brand new Boeing 787-10.

Direct aisle access for all, enhanced privacy and fully flat beds were now going to become the norm in this cabin.

Time flies and already, 15 months later, 45% of Regional Business Class seats installed on the Singapore Airlines fleet are now the new 2018 version. That figure is set to rise to over 66% by March 2020 as older aircraft make way for new A350s and 787s.

It’s quickly made the now decade-old 2009 version, a more dated 2-2-2 layout seat that converts into an angled bed, look long in the tooth.

We have a full review of the seat on a Airbus A330 from a Bangkok to Singapore flight here.

Where do they fly?

Still a number of places within 5 hours of Singapore, but there are nine routes you need to watch out for where you can potentially be stuck in the Singapore Airlines 2009 Regional Business Class seat for more than five hours.

In one example, to or from Wellington, you’ll have to tolerate 11 hours of flying time in the seat, so it’s vital to know what the alternatives are. 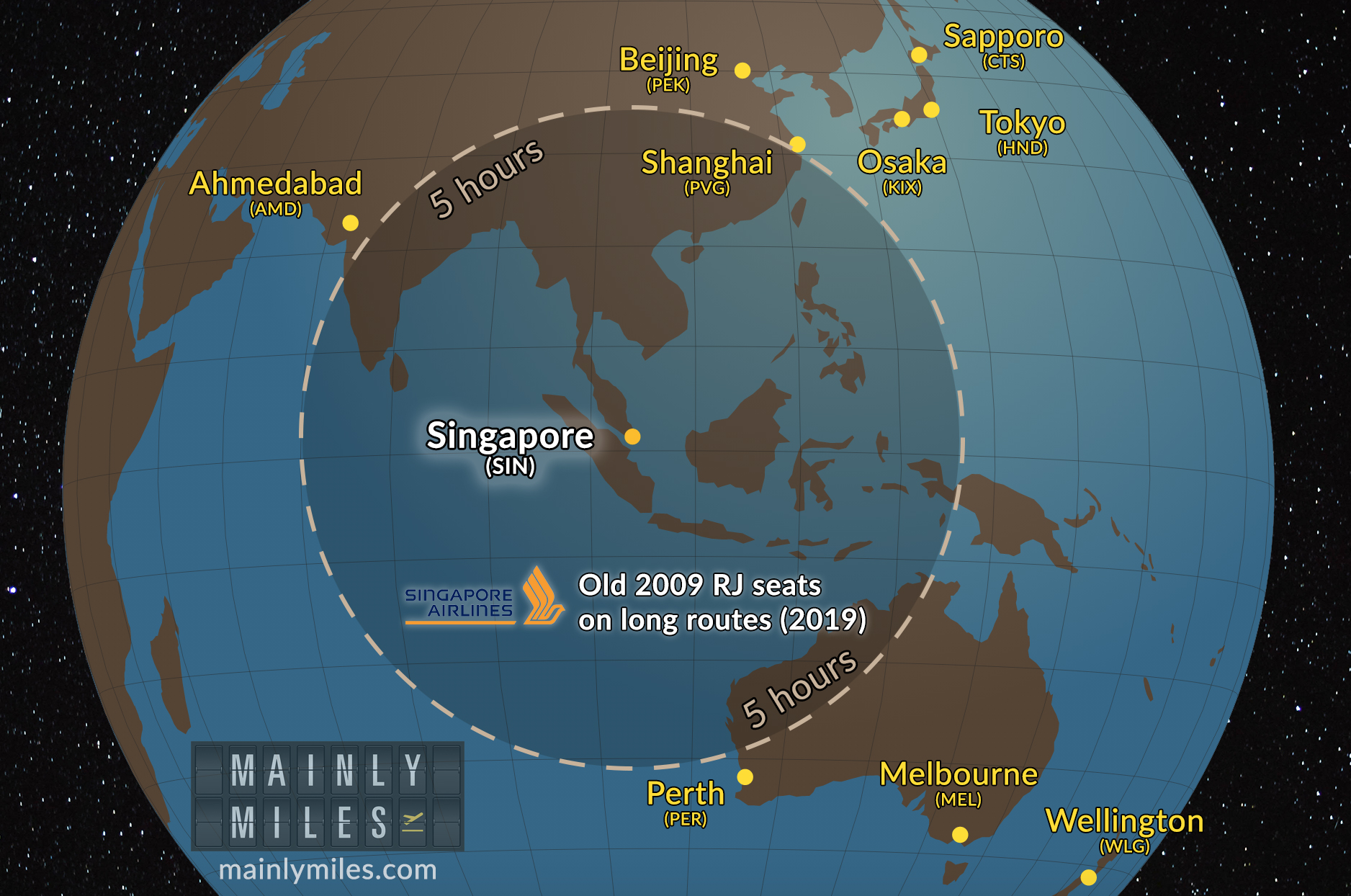 Here are the longer routes where you’ll see these older Regional Business Class seats flying for the rest of 2019. Where possible, we’ve listed the better alternatives too, to help you choose better when you come to book or redeem. 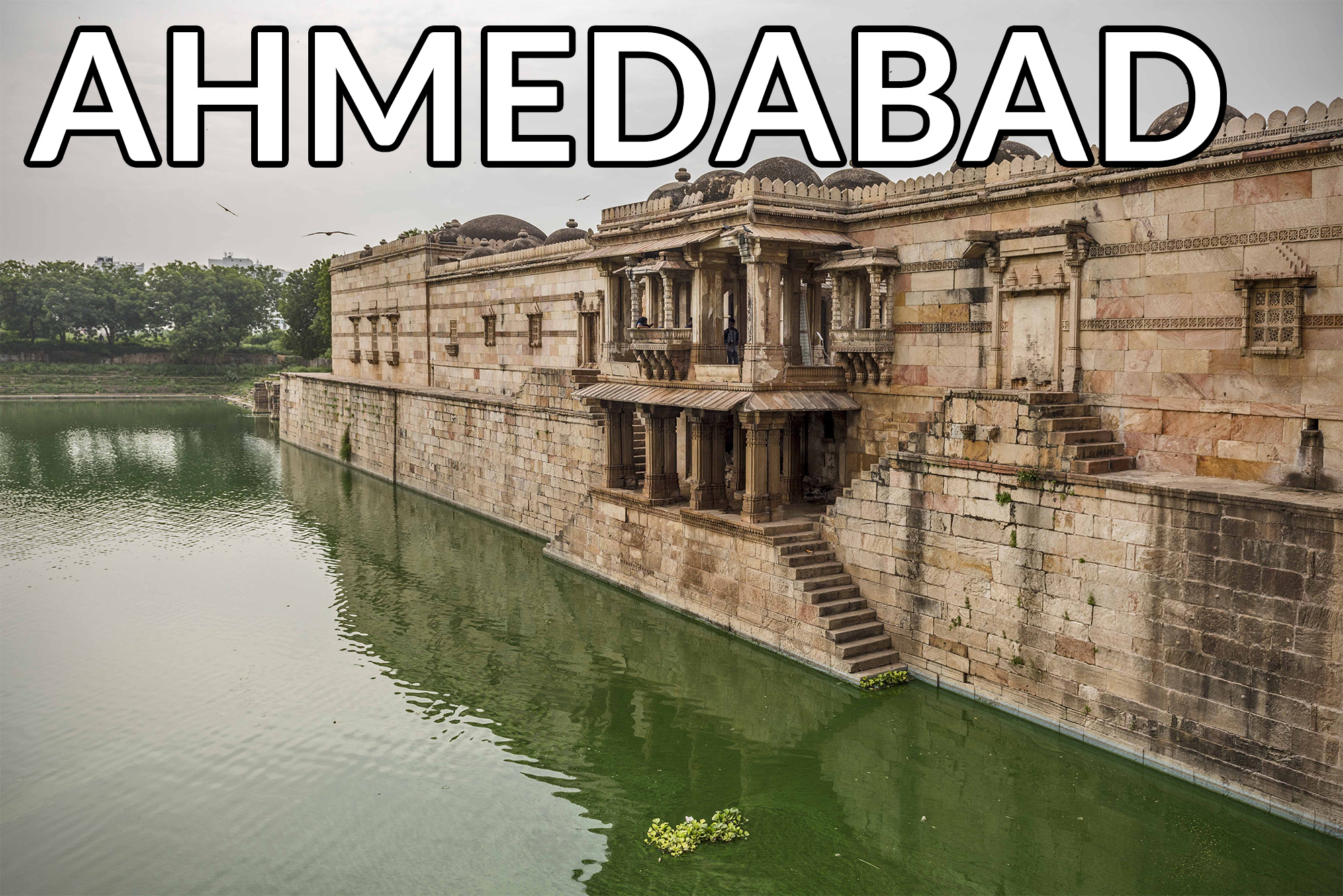 Alternatives: None here unfortunately, SIA’s four times weekly service to and from Ahmedabad is exclusively flown using the A330-300, so you’d probably have to fly to Delhi or Mumbai on a plane with newer seats then take a domestic flight to avoid the 2009 RJ on this route. 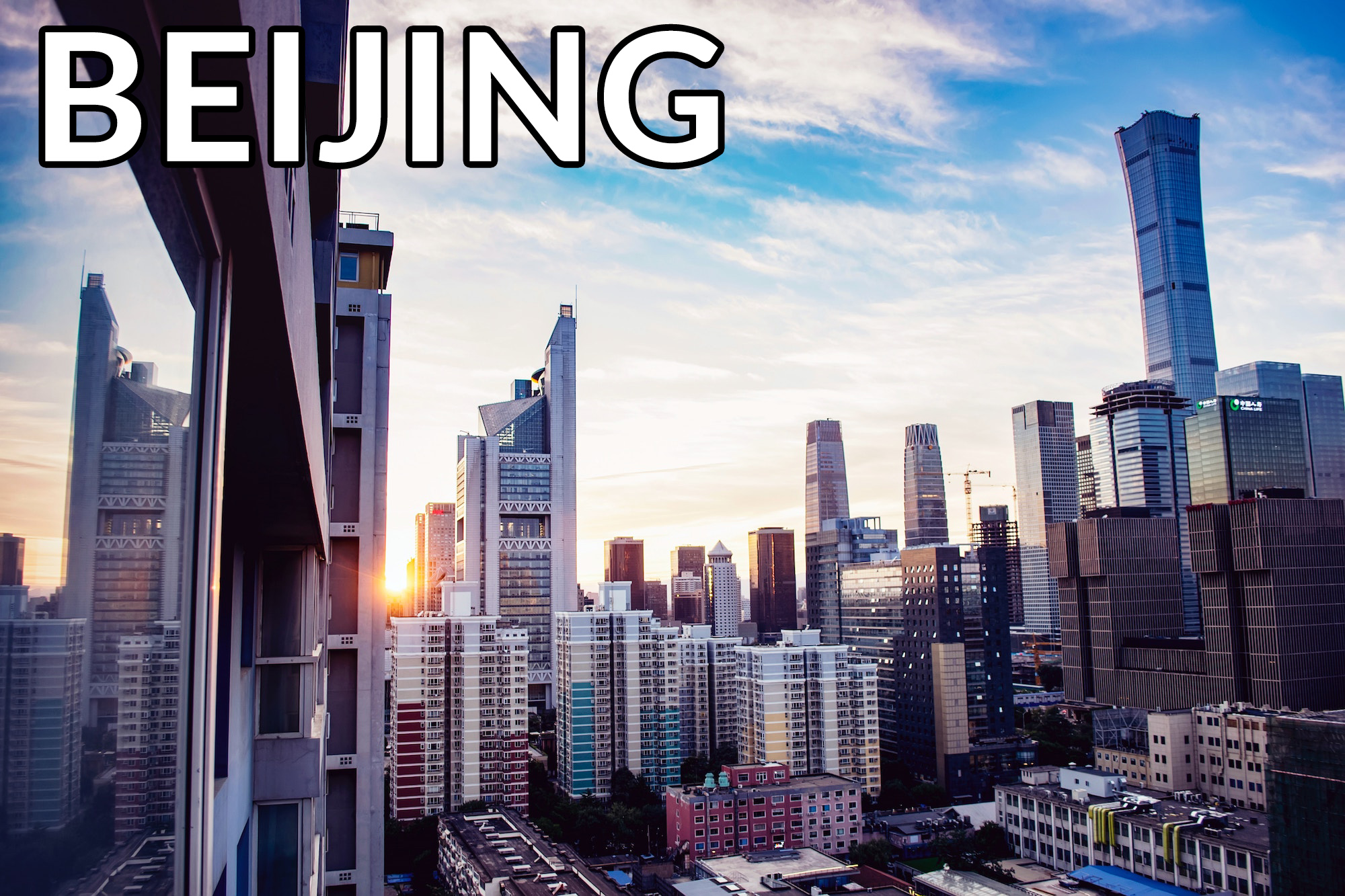 Not technically until 2020, the SQ800/805 Beijing flights actually switch to the 777-200 with 2009 RJ seats from February next year, but we thought we’d include this one as it’s a long route and currently you’re guaranteed a long-haul seat type whichever service you take on it each day.

Currently the SQ800/805 flight pair is flown with the 777-300ER with 2013 Business Class seats, so it’s quite a come down, especially as SQ800 is SIA’s sole overnight service from Changi to Beijing.

Four of the five remaining 777-200s are leaving the fleet through the next year and so we can only hope this change doesn’t actually happen, but for now avoid the SQ800/805 after 1st February 2020 until we’re sure. 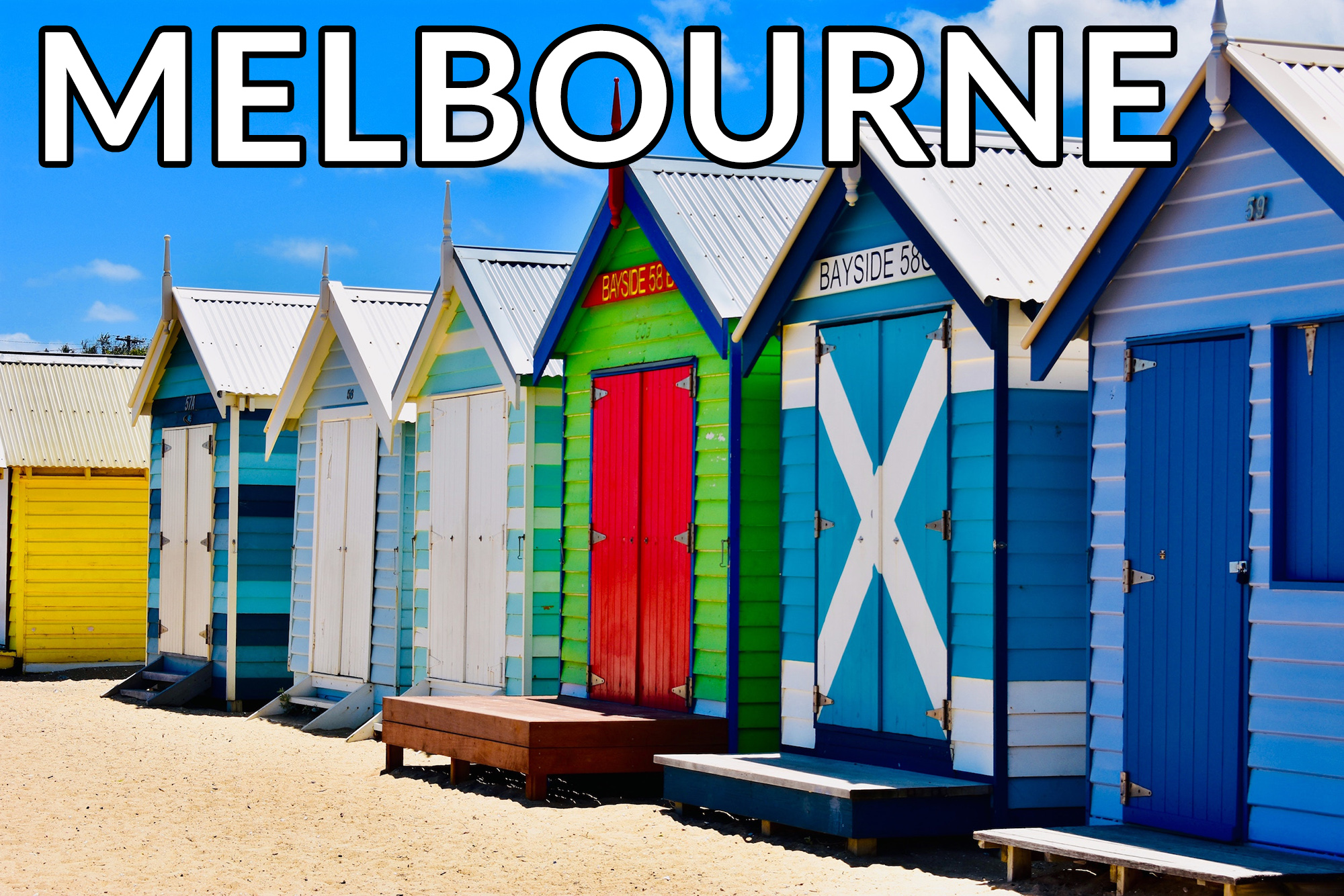 Operating four days per week, the SQ247/248 to and from Melbourne is still flown on the 777-200 with 2009 RJ seats. The service continues to Wellington, as you’ll see later in the article.

This one will have to change equipment type eventually, with only one 777-200 in the fleet by 31st March 2020 which would be unable to support the schedule on its own, though there’s nothing to stop SIA switching it to an A330. We’re expecting and hoping for an A350 Regional though.

Until we know, avoid this one.

Alternatives: All four daily alternatives to and from Melbourne feature the 2013 J or 2006 J seats in Business Class, so just avoid SQ247/248.