A slow but progressive increase in Singapore Airlines flights over the last few months will see the airline operating at around 11% of its usual capacity levels by the end of November 2020, with the carrier currently deploying nearly 60 of its passenger aircraft on a mixture of both regular and cargo-only flights, based on data for the last two weeks.

As with previous updates, five aircraft types in the fleet remained firmly out of service in September, including all Airbus A330s and Airbus A380s.

The official registered aircraft data in combination with analysis of actual flight movements over the last few weeks allows us to determine the actual ‘in service’ fleet (available to the airline) of 121 planes at 30th September 2020, 57 of which are currently active. 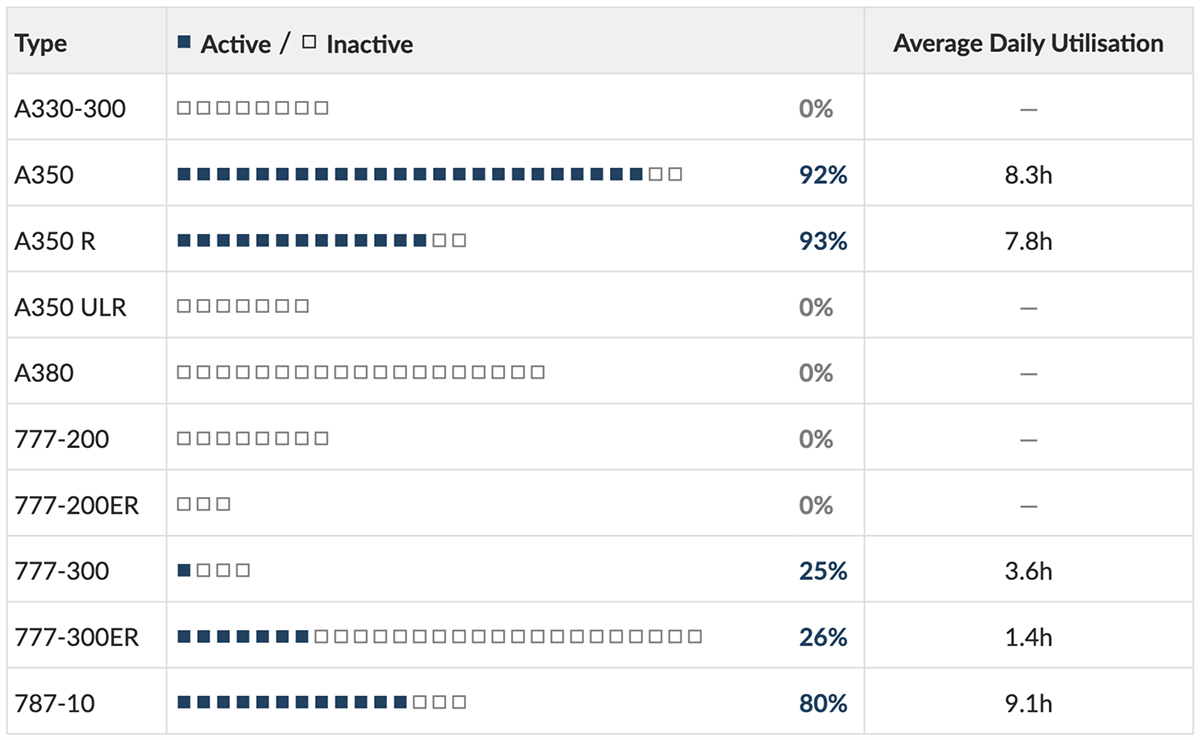 Utilisation of the single Boeing 777-300 in service jumped from 1.5 hours per day to 3.6 hours per day between August and September, as the aircraft (9V-SYJ) began regular passenger Surabaya flights and at flew least one charter to Kathmandu.

The small number of active Boeing 777-300ERs continue to fly only a handful of times a week based on data from the last 14 days, generating the lowest average daily utilisation of 1.4 hours.

Airbus A350s and Boeing 787s on the other hand are far busier, with the active aircraft in those fleets clocking up eight to nine hours per day on average, an increase compared to our last snapshot over two weeks in August.

After three older Boeing 777 aircraft left the fleet in the August 2020 update, things have settled a little with no permanent disposals this month.

We expect further Boeing 777-300s (non-ERs) will be on their way out in the coming months, sealing the fate of SIA’s 2006 First Class cabin product.

This month there were no new aircraft deliveries, however one additional aircraft was transferred from NokScoot (9V-SRF, formerly HS-XBA). This was expected because only six of the former Thai low-cost carrier’s seven aircraft had been returned at the last update, though all seven are SIA-owned.

Here’s the latest summary of NokScoot aircraft returned to Singapore Airlines as of September 2020.

As you can see these aircraft range from 17 to nearly 20 years old (Singapore Airlines rarely keeps aircraft more than 15 years from new).

They will not return to the fleet and as such the SIA Group took a one-off charge of S$127m in Q1 of FY20/21, from write downs of these aircraft, including provisions for liquidation costs of NokScoot.

October and November 2020 will boast the busiest passenger schedule for Singapore Airlines services since most flights were cut in April 2020 due to the COVID-19 pandemic.

By late November 2020, 31 passenger routes will be served with over 200 weekly flights offered. The latest cities on the list include Taipei, Surabaya and Johannesburg.

There are also six SilkAir routes by early October (Penang will be the latest), plus 20 Scoot routes, though in both cases there is some overlap with existing SIA destinations.

A large chunk of Singapore Airlines flights using passenger aircraft continue to only fly cargo (with some earmarked only to do so), necessitating an increased fleet compared to the headline ‘capacity’ percentage.

Here’s how SIA’s passenger fleet activity looked on 30th September 2020, which gives us an indication of which aircraft are stored (last flew 14+ days ago), compared to those either active or in ‘active storage’ (last flew more recently).

All the airline’s Airbus A330 aircraft remain stored in Singapore. None have flown passenger flights for close to six months.